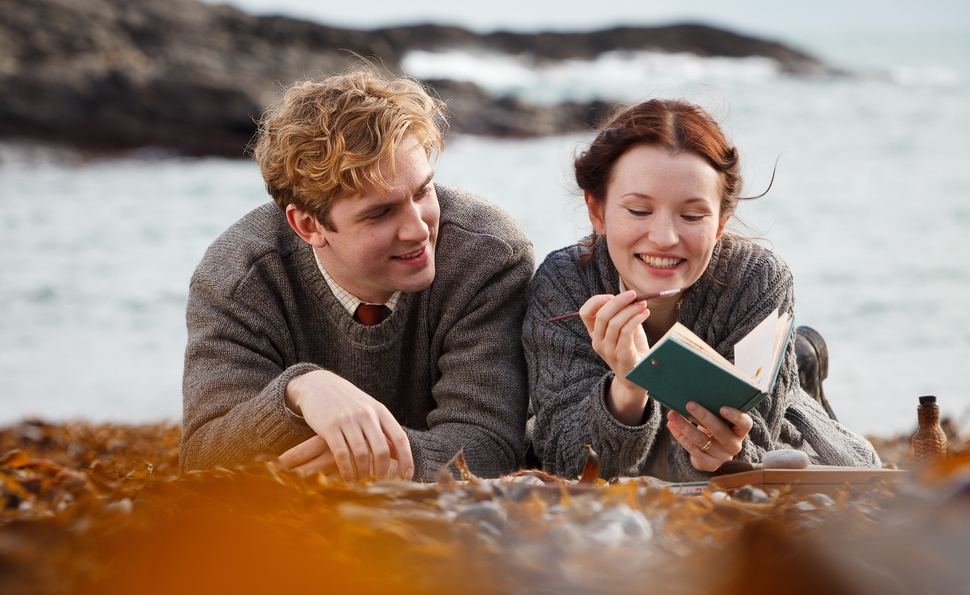 Regardless of its true-story credentials, Summer In February seems to have been cobbled together from the moldy spare parts of countless Masterpiece Theater PBS movies. Christopher Menaul’s film concerns the artists’ colony at Lamorna in 1903 Cornwall, England, where along windswept seaside cliffs, aspiring painter Florence Carter-Wood (Emily Browning) arrives in an attempt to escape her domineering father (Nicholas Farrell), who wants to marry her off to someone she doesn’t love. There, Florence meets the two men who will shape her future: larger-than-life colony bigwig A.J. Munnings (Dominic Cooper), and reserved soldier Gilbert Evans (Downton Abbey’s Dan Stevens). They represent polar-opposite romantic options for Florence: A.J. is a brash, arrogant, self-centered superstar in the making, apt to impress fellow tavern-dwellers with his own poetry, while his best friend Gilbert is a respectable dullard of noble upbringing and decorous manner.

As befitting such setups, Florence immediately takes to Gilbert, but is dazzled by A.J., whom two different people label a “genius” at the outset, just to make sure the point gets across. Such heavy-handedness is part and parcel of Menaul’s direction, which so stresses every narrative beat that the characters’ suppressed emotions are virtually splashed across the screen. While his panoramas of the community boast a picturesque grayness in keeping with the material’s ever-more-depressing trajectory, his pacing is sluggish and his visual framing is routine, lending the proceedings a frustrating inertia. That said, Jonathan Smith’s screenplay is also to blame for the lack of momentum and obvious, one-dimensional emotional dynamics at play, as it routinely stuffs unnecessary, intrusive exposition into the characters’ mouths, turning the film into an exercise in show-then-tell tedium.

When Florence’s father comes to see what his daughter and her brother Joey (Max Deacon) are up to at the colony, Florence trots out Gilbert to impress her domineering daddy. Yet despite Gilbert’s obvious affections for her, she promptly agrees to marry A.J. because he’s so magnetically full of life, telling her to be brave and bold as an artist, and to “feel” her painting. Florence then expects an obviously hurt Gilbert, now walking around with a perpetual Sad Face, to remain her friend—an expectation that, in light of her obvious flirtation with him, makes her more than a bit off-putting.

Rather than complicating her plight by investigating her heart’s dueling impulses, or the reasons a young girl would be so oblivious to the harm she’s causing, Smith’s script instead has Florence come across as just cluelessly callous, affording her—like every other character—only one personality trait at a time. That’s even more true when it comes to A.J., who upon marrying Florence suddenly transforms from lovable rogue to abusive monster: disparaging Florence’s artistic inclinations, threatening to rape her, and displaying his portrait of her in a gallery alongside his paintings of a gypsy and harlot he also screwed.

All this is performed with monotonous bluntness and staged with maximum “Heavens to Betsy!” breathlessness, so every subsequent plot twist comes across as another contrived pit-stop on the way to an inevitably catastrophic conclusion. A bottle of cyanide soon factors into the increasingly despondent tale. Yet like so much of the action that preceded it, this development merely further underlines the been-there/done-that quality of the entire endeavor, and no amount of topsy-turvy cinematography or unspoken-longing gazes can compensate for the nagging impression that the filmmakers are less interested in digging into their characters’ conflicted desires than in regurgitating conventions. Never less than predictable and all-too-often torpid, it’s a work that filters roiling true life through stolid formula.