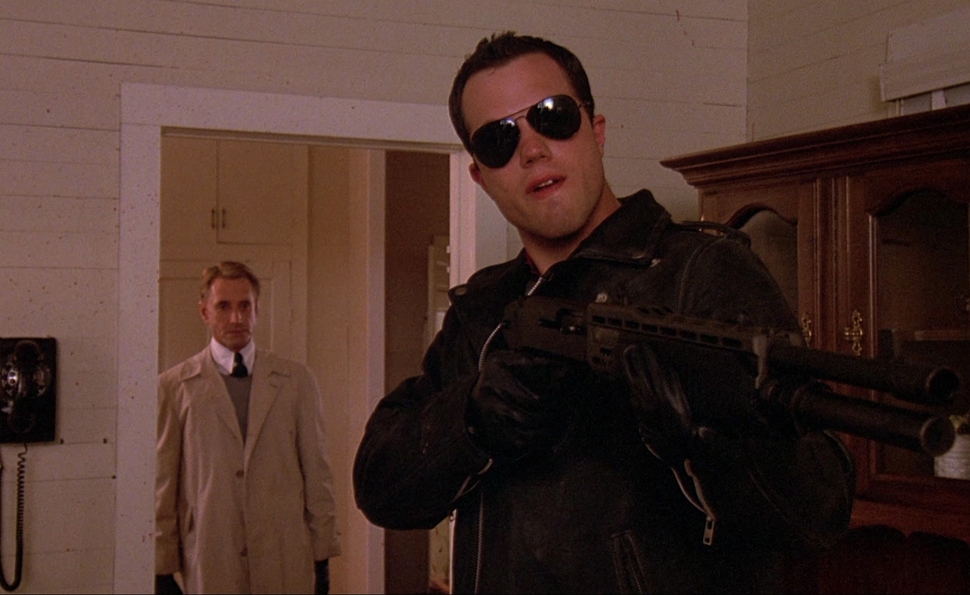 There’s a key moment in 1988’s Cohen & Tate where Cohen, a veteran hitman played with icy reserve by Roy Scheider, has some calming words for a highway patrolman he’s holding at gunpoint. “We both have jobs to do,” he says. “Yours is to look after public safety. Don’t worry about mine.” With that, Cohen defines who he is—a professional who happens to kill people for a living—and so does Eric Red’s diamond-sharp action film, which makes a virtue out of doing the job right. Making his directorial feature debut after scripting such mid-’80s genre staples as The Hitcher and Near Dark, Red opts for bare-bones simplicity, in both his three-character premise about bickering hitmen transporting a 9-year-old across Texas and the classical, whip-crack staging of the action. It’s a modest achievement by design, an attempt to bring the pulp undercard of a 1950s double feature into the modern age. But its humility carries a hidden artistry.

Never is this more evident than the opening sequence, which finds a family of three hunkered down in a farmhouse on the Oklahoma plains, guarded on all sides by government agents in suits and aviator sunglasses. Nine-year-old Travis Knight (Harley Cross) has been relocated there after witnessing a mob shooting in Houston, and as the titles brusquely inform the audience, “They want to talk to him right now.” It’s clear enough that bad guys will encroach on the property—otherwise, there’s no movie—but Red draws out the tension slowly, with small, quiet events like the appearance of a shifty agent and a dead phone line building to the horrifying chaos of bullets and blood. At the end of it, Travis’ parents and protectors have been butchered, and two assassins—veteran mercenary Cohen and his hotheaded young partner Tate (Adam Baldwin)—have nabbed the boy for the long drive back to Houston.

A twist on “The Ransom Of Red Chief,” O. Henry’s 1910 short story about kidnappers who eventually have to pay ransom to persuade a wealthy Alabaman to take back his abducted son, Cohen & Tate doesn’t err by making Travis a cute, annoying little imp. Instead, the kid simply recognizes the existing tension between his abductors and craftily exploits it, provoking Tate into an irrational fury that in turn forces Cohen either to settle his partner down or consider finishing the job alone. The bulk of Cohen & Tate takes place in car heading south, a tense dusk-’til-dawn drive that leads to periodic confrontations from within and without. Red nails the action beats with meat-and-potatoes regularity, but the road becomes a presence in itself, a constant menace of screaming semis and unexpected obstacles. He doesn’t allow a wasted second.

At times, Red’s impulse to deliver the action goods results in sequences more obligatory than inspired, and Baldwin’s psychotic assassin lacks the comic grace notes the actor later brought to his high-strung tough guys on Firefly and Chuck. But Cohen & Tate deserves rescue from the dustbin of 1980s action movies, if only for pushing against the macho excesses of Stallone and Schwarzenegger and embracing a pared-down style more in line with Westerns like The Searchers and the minimalist cool of Jean-Pierre Melville. Given the restrictions of being a first-time director on a limited budget, Red didn’t conceive Cohen & Tate to be different than other films of its ilk. He just opted to do it better.

A 20-minute making-of documentary gathers several of the surviving principals—Red, editor Edward Abroms, and cinematographer Victor J. Kemper—and a bit player whose character gets shot in a gas station. Together, they reflect on making a buddy movie with bad guys, cutting the violence to appease the censors, and casting Scheider as a “samurai” type. Another 20 minutes of deleted scenes show much of the violence was cut, but much of the unused footage just extends scenes that are in the finished film. Red also contributes an excellent commentary track in which he recalls this 25-year-old production as if it were yesterday.