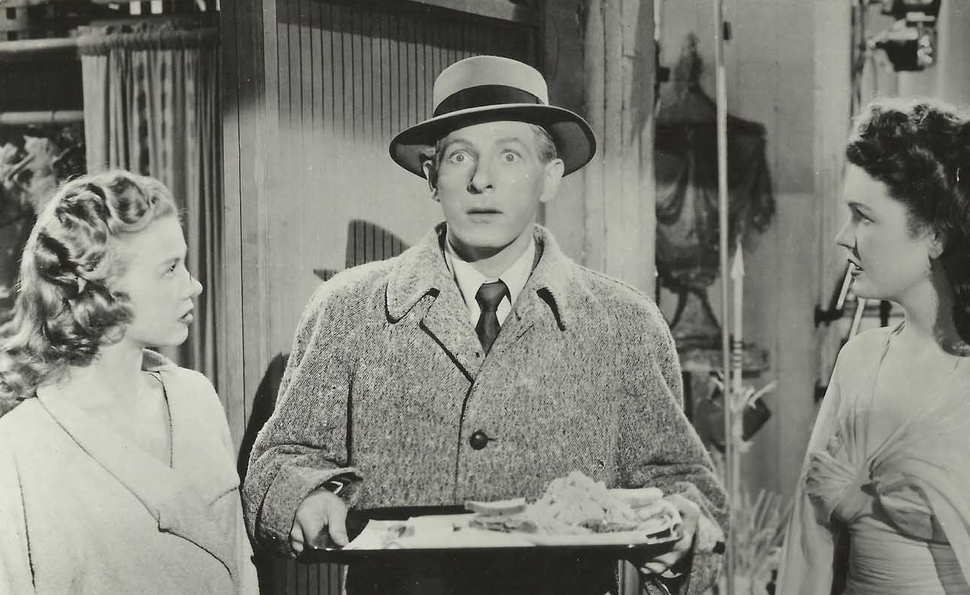 Because comedy styles and tastes evolve fairly rapidly, the comedians who endure across generations often aren’t the funniest, but the ones with innate gracefulness and zest. Danny Kaye got his start in vaudeville, where he became famous for doing foreign accents, facial contortions, and rapid patter-songs—all of which he did again onscreen in the late 1940s, in the scattershot musical comedies he made for Samuel Goldwyn. But unlike the similarly rubber-limbed and motor-mouthed Jerry Lewis, Kaye always lacked a certain abandon. Where Lewis was genuinely anarchic, with a genius for staging comedy as well as performing it, Kaye was more like a great song-and-dance man who stumbled into comedy, then ended up being typecast as a buffoon. With his resonant, rangy voice and physical agility, Kaye could’ve been an entirely different kind of movie star under different circumstances. But that’s what makes him such a pleasure to watch, even in comedies that have grown staler over the years. He may not get as many laughs any more, but Kaye still invites awe.

Kaye’s first three feature films—all available in the Warner Archives four-disc set Danny Kaye: The Goldwyn Years—capture him at his most electrifying, even though the movies themselves range from “dire” to “okay.” Kaye is a hypochondriac who gets drafted into the Army in 1944’s Up In Arms, a bookworm and the ghost of his nightclub-star brother in 1945’s Wonder Man, and a milkman who accidentally becomes a prizefighter in 1946’s The Kid From Brooklyn. But in each film, the premise is a thin thread on which the Goldwyn creative team hang big numbers, often barely related to the plot. Kaye is at his best in Up In Arms, where he stops the show multiple times: with an extended one-man parody of a typical singing-cowboy picture, with a scatted riff on a soldier’s life, and with a jump-jive fantasy sequence alongside Dinah Shore. In both Wonder Man and The Kid From Brooklyn, Kaye trots out a polished bit of shtick from his stage act, doing his imitation of a highbrow, neurotic Russian aesthete, but his thunder gets stolen by dynamo hoofer Vera-Ellen, who gets solo showcases that end up being the films’ most memorable moments.

All three of these films share the same problems, rooted in the way star vehicles were often constructed in the 1940s. There’s rarely any continuity between the characters Kaye is supposed to be playing (meek, nebbishy) and how they behave (extroverted, multitalented) when it’s time to put on a show. Also, the Goldwyn films typically found time for a performance by “The Goldwyn Girls,” a chorus who’d come out, show off their legs, and sing some tuneless song with not-as-clever-as-they-mean-to-be lyrics about modern life. The weakest movie of this early lot is The Kid From Brooklyn, a remake of 1936’s The Milky Way, which keeps stalling the plot to fit in another of the usual Goldwyn musical-comedy elements. Similarly, 1948’s A Song Is Born—a remake of the Howard Hawks-directed, Billy Wilder-penned 1941 comedy classic Ball Of Fire, with Hawks returning to the director’s chair—is a dreary affair, sanding off the original’s satirical edges while casting Kaye as a mopey musicologist helping harbor a sexy fugitive played by Virginia Mayo.

Between The Kid From Brooklyn and A Song Is Born, though, Kaye made the 1947 big-screen adaptation of James Thurber’s The Secret Life Of Walter Mitty, a musical-comedy with a story suited to Kaye. (A Song Is Born is included in Warner Archive’s MOD Goldwyn set; Walter Mitty is available as a standalone DVD, and isn’t MOD.) In Thurber’s original short story, Mitty is a mild, henpecked husband who daydreams about having daring adventures. In the film, Mitty does the same—often prompted by the same “ta-pocketa-pocketa-pocketa” sound that Thurber describes in the story—but he also gets embroiled in real intrigue, when he crosses paths with a beautiful secret agent again played by Kaye’s frequent co-star Mayo. Thurber fans (and Thurber himself) protested the changes, which undercut the story’s theme of quiet middle-class yearning. The best parts of the movie Mitty are the ones that hew closer to Thurber, because they put the cartoonish Kaye in a world every bit as nutty. On the whole though, what makes The Secret Life Of Walter Mitty the most satisfying of the early Kaye films is that it lets him show off his skills—singing, stumbling, mimicking—without ever breaking character, per se. Whether he’s pretending to be a misogynist French hat-designer or a hotshot British fighter pilot, he’s still Mitty.

Kaye really came into his own as an actor in the 1950s, when he started appearing in movies that were more fully realized, and weren’t just a compendium of bits. Two of the most entertaining are in another double-disc Warner Archive set: 1956’s The Court Jester and 1959’s The Five Pennies. The former is rightly regarded as one of the peaks of Kaye’s career, with Kaye as a bumbling medieval rebel who tries to help restore the rightful heir to the throne by posing as a traveling jester. The joke of The Court Jester is that everyone in the current king’s court has a secret plan, and they all think the hero is working with them. The writer-director team of Melvin Frank and Norman Panama deliver a fair amount of narrative complexity, while also choreographing grand rituals and ceremonies, and delivering amusingly ornate dialogue like, “Caution is for popinjays and cockatoos!” and “The pellet with the poison’s in the vessel with the pestle, the chalice from the palace has the brew that is true!” The Five Pennies, meanwhile, is a biopic of Red Nichols that takes some of the actual details of the jazz cornetist’s life—his struggle to convince his fellow musicians that Dixieland was the next hot sound, his quitting the business to spend more time with his sickly daughter, and his comeback—and fashions them into tearjerking melodrama.

Kaye is an entirely different kind of performer in these later films. Even in the relatively wacky The Court Jester, in which Kaye adopts different guises, he’s much less manic than he was in the 1940s. The Five Pennies is a solidly crafted movie that glosses over a lot of the real history of jazz (in particular, the racial divide, which is nonexistent in the film), but it’s most fascinating for how earnestly Kaye plays it. This is the kind of corny Hollywood weepie that the younger Kaye would’ve mocked in the 1940s—most likely in some breathless song, performed with several goofy accents—yet he seems completely at ease playing the material straight. It’s as though Kaye were himself Walter Mitty, pining for the career of Gene Kelly.

The only extra of note is on the Walter Mitty disc: an interview with Virginia Mayo that runs for all of 90 seconds.