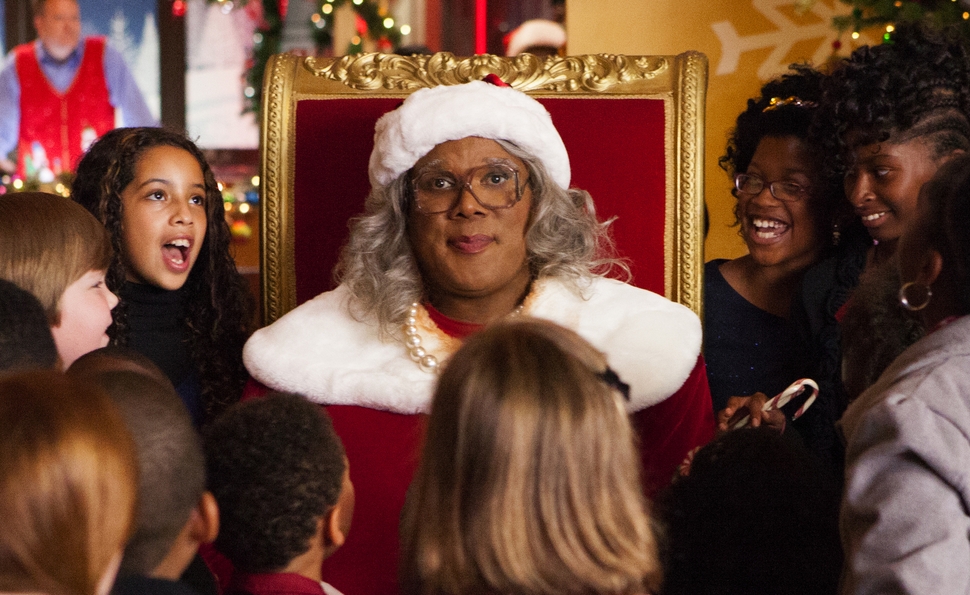 A Madea Christmas belongs to a rancid strain of Yuletide trifles that feature awful people being terrible to each other for 90 minutes under the sway of insulting plot contrivances before the awfulness is climactically washed away in an avalanche of holiday sentimentality. It tosses itself into the tinsel-strewn trash heap alongside Deck The Halls, Christmas With The Kranks, Surviving Christmas, and all the other yucky exercises in casual misanthropy that cynically piggy-back on the public’s enduring affection for all things Christmas. The filmmakers know all too well that Christmas movies don’t really have to be good to be commercially successful and live in perpetuity on basic cable; they just have to be Christmassy.

The film’s primary attraction, beyond its Yuletide setting, is the crowd-pleasing showdown between Tyler Perry’s Madea and Larry The Cable Guy, those towering titans of lowbrow culture. It’s a measure of the film’s staggering miscalculation that both wildly popular (and wildly despised) performers are overshadowed to the point of being negated by the dreadfulness of Anna Maria Horsford’s performance as Madea’s niece and foil, Eileen. Horsford completely dominates the film as an evil matriarch who sneers at lusty white farmhand Conner (Eric Lively) for being arrogant enough to consider himself the equal of Eileen’s schoolteacher daughter Lacey (Tika Sumpter). Little does Eileen realize that Conner, who is also an agricultural super-genius and looks like an underwear model, is actually her daughter’s husband.

Yes, A Madea Christmas tackles what it imagines to be an explosive social issue in 2013—interracial relationships—with a ham-fisted awkwardness that makes 1967’s Guess Who’s Coming To Dinner look like an explosive, ahead-of-its-time exposé by comparison. But the red-hot issue of interracial relationships isn’t the only item on the film’s misplaced agenda. It’s also not-so-secretly a shot fired in the neverending War On Christmas, which exists primarily in the paranoid delusions of Fox News commentators.

A Madea Christmas takes on the forces who want to remove explicit references to Christ’s divinity from public spaces through a subplot that finds an evil construction company donating $100,000 to fund a holiday jubilee with an ominous stipulation. The company, which has financially destroyed the small town with its shady practices, requires that said jubilee be filled with songs about Santa Claus and White Christmases instead of hymns explicitly glorifying Christ as humanity’s savior—a move the film treats as essentially re-crucifying Him.

Perry’s abysmal Christmas romp—which started life as a 2011 stage musical—begins with Eileen, who works at a fancy department store, getting Madea a Christmastime job there, despite firsthand knowledge of Madea’s Tourette’s-like inability to censor herself. In a not entirely unexpected turn of events, Madea loses her customer-service position after peppering the customers with roast-style insults. That kind of sequence undoubtedly plays like gangbusters onstage, where the wild mugging of both Perry and the outraged customers are pitched to the rafters, but it dies such an egregious death onscreen that it could use a braying laugh track just to establish it’s supposed to be funny. When she’s fired, Madea shovels money out of the cash register and steals dresses from the racks while screaming invectives at her bosses and the customers. But just a few scenes later, Madea and Eileen are driving to Alabama to visit Lacey as if nothing has happened.

Eileen apparently thinks nothing of her dear friend publicly humiliating her while broadcasting her contempt for Eileen’s workplace, which is astonishing, since otherwise, Eileen’s defining characteristic is being incredibly judgmental and unsparing. Eileen is so contemptuous of whites, for example, that Lacey can’t work up the nerve to tell her mother that she’s married the aforementioned impossibly perfect farmer-god. Instead, she promotes the ridiculous fiction that he’s merely a lowly farmhand who just happens to have central prominence in her life.

This fiction becomes even more insultingly preposterous once Conner’s salt-of-the-earth parents Buddy (Larry The Cable Guy, with granny glasses and grey in his beard to make him look more avuncular) and Kim (Kathy Najimy) show up to celebrate Christmas with their son and his wife and must pretend they’re merely the parents of her daughter’s employee. Buddy and Kim are astonishingly accommodating of Eileen’s bigoted ignorance out of deference to a heart condition that could cause Eileen to perish instantly, should she ever receive unpleasant news. But even their superhuman tolerance is tested when Eileen mistakes some of their ghost-themed sex play for evidence that they’re secretly members of the Ku Klux Klan.

Yes, A Madea Christmas prominently involves ghost-themed sex play with Larry The Cable Guy. But that description makes the film seem much livelier and more fun than it actually is. For that matter, so does the film’s shameless use of what are essentially Christmas-themed star-wipes, glittering transitions that take audiences from one dire, laughless, soul-killing sequence to another via a gaudily animated Christmas tree, or a stack of presents festooned with glitter.

Madea’s great appeal as a cultural icon is that she’s an irrepressible truth-teller and shit-talker, but she spends most of Christmas biding her time and holding her tongue while Eileen’s racism, classism, and contempt for everything make everyone miserable. Madea diligently refrains from uttering the words that would put the film’s idiotic charade to rest and boldly assert that, yes, in 2013, impossibly perfect people can love each other and build lives together, even if they’re from different races.

Perry appears to be regressing as a filmmaker. A Madea Christmas feels unfinished and rushed, as if Perry shipped the film to theaters without finishing his editing or scoring, secure in the knowledge that no Madea film has suffered at the box-office for being ramshackle and amateurish. The film may sound like an instant camp classic, but while it’s staggeringly odd, it isn’t much fun. It aspires to a Mama’s Family level of comic sophistication, and comes up short. It’s so backward and regressive in its politics, and so muddled in its storytelling, that Larry The Cable Guy comes across as both a wonderfully understated performer (he and Najimy are easily the best parts of the film) and a paragon of racial sensitivity. The film does, however, have the decency to be substantially shorter than most of Perry’s other films, which qualifies as its sole, meager Christmas gift—that’s Christmas gift, mind you, not holiday gift—to a world from which Perry has taken so, so much.