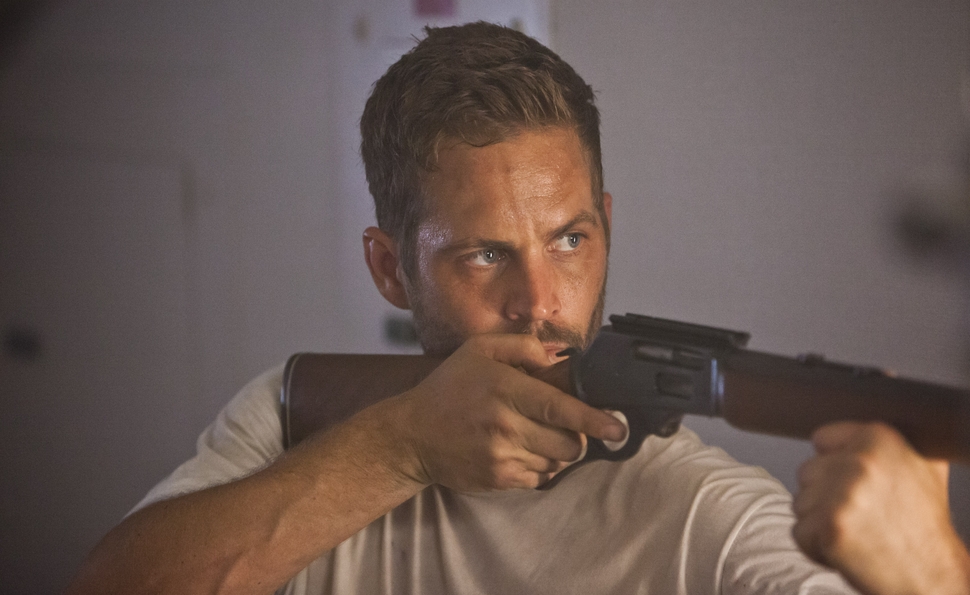 When Paul Walker was killed in a car accident a couple of weeks ago, reactions were a bit more conflicted than they often are to the tragic premature death of a movie star. Nobody needed to qualify their extravagant praise of, say, James Gandolfini, but even the most laudatory pieces about Walker tended to be positioned against the general perception that he was a good-looking lightweight who happened to land a long-running franchise. By coincidence, Hours, a movie eager to contradict that image, arrives in theaters almost immediately after his death, as if demanding reassessment. Walker is the whole show here, nearly as alone onscreen as Robert Redford in All Is Lost, and while he doesn’t remotely manage a similar tour de force, and is trapped in a pretty mundane thriller, there are glimpses of modes much richer than fast and furious that suggest a lot of potential that will sadly remain untapped.

Set in New Orleans during Hurricane Katrina, Hours opens already in crisis mode, as Nolan (Walker) follows a gurney carrying his very pregnant wife, Abigail (Genesis Rodriguez), who’s having major complications five weeks before her due date. Abigail dies, but the infant, a baby girl whom Nolan, in his grief, also names Abigail, survives, though she can’t yet breathe on her own and has to be housed in a ventilator. When the levees fail and the flood waters start rising, the hospital is speedily evacuated, but baby Abigail’s ventilator can’t be moved, nor can she be removed from it. Soon, Nolan is utterly alone in a building with no power, desperately trying to keep his newborn child’s ventilator running via a defective battery that can only hold a charge for three minutes. He has no food except what he can scavenge from vending machines, no opportunity to sleep for even five minutes, and no idea when help may arrive. And with so many pharmaceuticals on hand, hospitals are prime targets for looters carrying shotguns.

Surprisingly, Hours doesn’t seem to be based, even very loosely, on a true story. Instead, writer-director Eric Heisserer—a horror screenwriter (Final Destination 5, the Nightmare On Elm Street reboot) helming his first feature—deliberately chose to burden himself with a self-defeating structural gimmick. Because the battery has to be manually recharged every three minutes (and its capacity dwindles over the course of the movie; by the end it’s down to about 90 seconds), Nolan has to constantly run back to his daughter's room and turn the crank, no matter what else may be happening. This admittedly provides some basic beat-the-clock suspense, but it also means that the movie is essentially a long, maddening series of interruptions, in which Nolan ventures out to flag down a passing helicopter or find replacement IV bags and then dashes frantically back to the room, over and over and over. Some tasks take him three or four separate attempts to complete. It’s as if Lost’s sole character had been Desmond, and he had to input those six numbers into the computer every 108 seconds. Not much time left to do anything else.

However, that narrative limitation works in Walker’s favor. Early on, saddled with terrible melodramatic dialogue, he’s embarrassingly bad. (Even Matt Damon in Contagion couldn’t make the Husband Who Just Flat-Out Refuses To Believe His Wife Is Dead remotely credible.) And where Redford’s desperate All Is Lost seaman performs all of his actions silently, as one generally would if alone, Nolan constantly narrates what he’s doing for the benefit of slower viewers: “I need a battery. Battery, battery...” When things are calm, though, Nolan sits with his baby and tells her about her mother, and these monologues, which might look fairly banal on paper, benefit enormously from Walker’s simple, heartfelt delivery. His ability to make an anecdote sound fresh, as if Nolan is genuinely remembering it anew as he speaks, is remarkable; he’s beautifully relaxed in these interludes, devoid of actorly mannerisms. And the depth of Nolan’s loss comes through more powerfully here than it does when he’s yelling at doctors or angrily demanding that an intern help him move his wife's corpse from its temporary location on a hallway floor (the morgue being overcrowded). From the evidence here, Walker’s forte may have been not action but stillness—a knack for embodying ordinary Joes without any fussiness. That we’ll never find out is truly a shame.