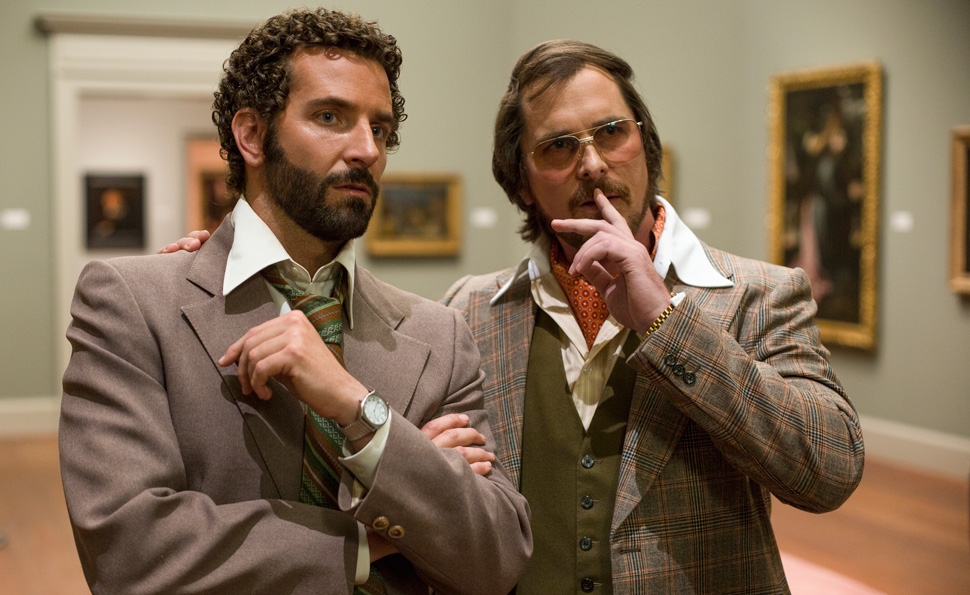 There’s no easier way to give a film an inflated sense of importance than tacking the word “American” to the beginning of the title, but that’s not really what David O. Russell’s up to with his latest film. A fictionalized version of the Abscam scandal operation that made headlines when it became public knowledge in 1980, American Hustle treats the two words of its title as nearly redundant. Its late-1970s America is a place where everyone’s working a hustle of one kind or another, even if only two of its characters could properly be called con artists. That the Abscam scandal itself—a sting operation that took down members of Congress and other politicians who accepted money from a fictional Arab sheikh named Abdul in exchange for favors—blurred the line between legitimate crime-fighting and entrapment makes it a perfect fit in a world that, as one character puts it, is less black and white than “extremely gray.”

It’s also extremely beige. Working from an Eric Singer screenplay originally titled American Bullshit, Russell soaks in the fashion excesses of the era, a time of earth tones and butterfly-like bowties, when the brave made plunging necklines and unbuttoned shirts the stuff of everyday dress, and hair found new ways to call attention to itself. Here the high-’70s style feels inextricable from the substance, adding a layer of artifice to characters already finding ways to hide their true selves from the world. The film opens with a scene of veteran con man Irving Rosenfeld (Christian Bale) covering his paunch with a flashy suit and carefully fixing a hairstyle that’s part toupee, part elaborate combover. Within minutes, he’ll see his work undone by the high-spirited and aggressive ribbing of Richie DiMaso (Bradley Cooper), the ambitious, tightly permed FBI agent who’s enlisted Irving and his longtime partner, sometime lover Sydney (Amy Adams) in his plan to record officials accepting bribes. Richie wrecks his grooming, but Irving soon finds a way to put himself back together.

It’s what he does, as the film reveals in a subsequent flashback to Irving’s origin story as the son of a hapless glass-shop owner who decided to be on the side of those who take rather than those who get taken. In voiceover, Irving relates first how he came to be a small-business owner with a sideline in fraud and stolen and/or forged art. Then, once he meets Sydney, her voiceover joins his for a story of how she reinvented herself for the big city and became unexpectedly infatuated with Irving, whose overwhelming confidence overpowers his unfortunate hairline and physique. All the while, Russell’s camera never stops moving, pushing forward down hallways and toward opening car doors as the soundtrack blares era-appropriate pop hits. As the film settles into a groove, the voiceover becomes less frequent, but the kinetic style remains, playing like a feature-length homage to Martin Scorsese in general and Goodfellas in particular.

As such, it’s both unfailingly exciting and overly familiar, a restless but risk-averse film that’s a little too content to borrow from what’s worked before. That borrowing only adds to a sense that everyone here is playing dress up, but it is quite a show, filled with big moments and bigger performances that find ache and yearning beneath the histrionics. It’s a movie in which more than one character lets out an agonized cry of despair, but there’s subtlety nested in those moments. Jennifer Lawrence plays Irving’s wife Rosalyn, who’s in constant competition with Sydney for her husband’s attention. In her own way, she’s as much of a schemer as Irving, and to watch the way Lawrence darts her eyes back and forth when confronting him reveals everything that needs revealing about the desperation and guile that keep her in the picture.

Those are the qualities that motivate all of American Hustle’s characters on both sides of the law. For Richie, recruiting Irving and Sydney (even if he doesn’t know her real name) offers a shortcut to glory, a way to blow past a cautious supervisor (Louis C.K.) and set his career on the fast track. In his own way, he’s every bit the cheat, and Cooper plays him like a puppy dog let off the leash for the first time and eager to play in traffic. Like the rest of the cast, Cooper’s not afraid to push his characterization toward caricature, and if there’s a quality that sets Russell apart from his inspiration, it’s his willingness to edge the material up to and well past the border separating comedy from drama without turning the film into an outright parody. It’s a neat trick that American Hustle pulls off, making a scene in which characters stride through the ’70s to the accompaniment of on-the-nose song choices that might embarrass Flight—starting with Steely Dan’s “Dirty Work” and pretty much staying that obvious—somehow seem fresh.

American Hustle contains fireworks aplenty—dramatic outbursts of bravura filmmaking, sly acting choices, a scene that makes Robert De Niro scary again—but also a few too many familiar moments. It’s also dogged by a nagging sense that it works better as a collection of brilliant scenes than a coherent whole. The film brings in ideas then drops them too soon, like the notion that the moral flexibility of Camden Mayor Carmine Polito (Jeremy Renner, under a Blagojevich-worthy swirl of hair) might ultimately be what his city needs to get back on its feet. American Hustle touches on this and other intriguing notions, but then loses them in the rush to keep moving forward and push the show along. It’s not a cheat by any means, but American Hustle also leaves a lingering sense that it’s not all it might have been.