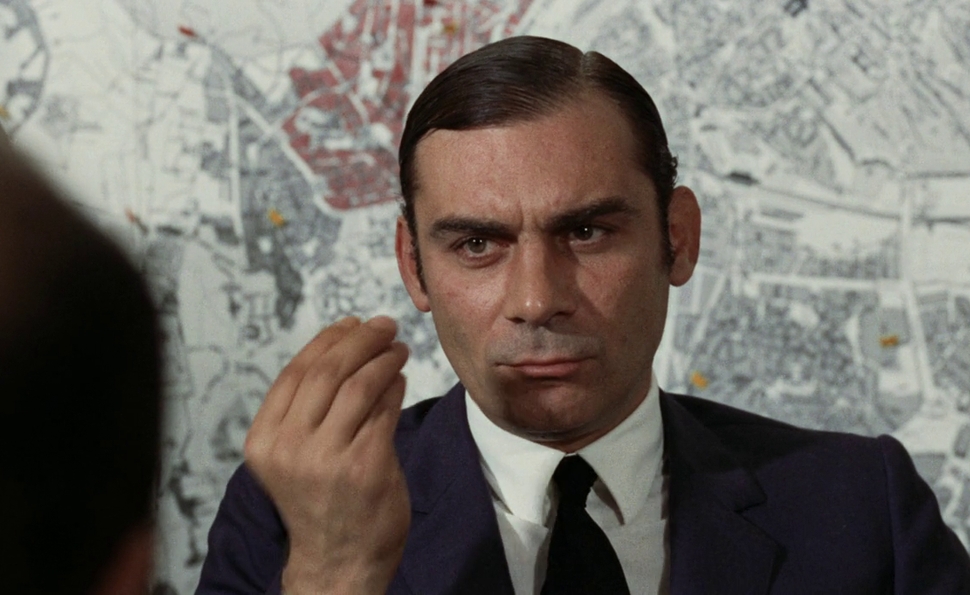 Investigation Of A Citizen Above Suspicion

From its first scene, Investigation Of A Citizen Above Suspicion refuses to give viewers a safe place to stand. As Ennio Morricone’s jaunty but foreboding score plays, a police inspector (Gian Maria Volonté, playing a man whose name is never given) stands outside an apartment building in Rome. From behind a window, a woman (Florinda Bolkan, playing a woman whose name is later revealed as Augusta Terzi) smiles seductively. After he climbs the stairs to her apartment, she embraces him and asks, “How are you going to kill me this time?” He replies: “I’m going to slash your throat.” They’re playing an ongoing lovers’ game, only this time, the inspector isn’t playing. In the love scene that follows, he takes a razor to her neck, washes up, has a nap, then leaves, taking some pains not to leave any evidence—but also dropping major clues that point directly toward him as the perpetrator. Why?

The answer gives no comfort: Because he can. The inspector is about to transfer from homicide to a police division covering politics—one that tracks and spies on potential radicals, essentially—and he suspects he’s become above the law. And by killing his lover, he’s found a way to prove it, if only to himself. Or has he? For the rest of the film, he’s dogged by his actions, haunted less by what he’s done, or the possibility of punishment, than the absence of consequences. The homicide department finds the clues he’s left, but waves them away, driving him to push the experiment further. He announces his guilt to strangers, and harasses Antonio (Sergio Tramonti), a young radical with whom Augusta was also having an affair. All the while, the film keeps flashing back to the inspector’s time with Augusta, one in which both got their kicks by re-creating crime scenes and letting Augusta play the part of the victim. For the inspector, it wasn’t enough to have a lover so pliable to his fantasies of power and domination. The fantasies had to be real.

Directed by Elio Petri, who co-wrote the film with Ugo Pirro, the 1970 film won the Best Foreign Language Oscar and caused a stir in Petri’s native Italy for its portrayal of police abuses. Both Volonté and Petri had radical sympathies and no love for the police, and the film is firmly rooted in the upheaval of its times, with incidents inspired by contemporary protest movements, terrorist actions, and violent interrogations. It’s an angry film that suggests it might be a fine idea to overturn the system that allows men like the inspector to assume power. (It also has no illusions about the left; after jailing dozens of radicals, one policeman notes “After two hours, they’ve already split up into four groups.”)

Yet as specific as the film is to Italy at the turn of the turbulent 1970s, it’s also a film about how power first corrupts, then makes mad those who possess it. Volonté, trailing many spaghetti-Western bad-guy roles behind him, plays the inspector as a man whose position and aura of power—and perhaps his immaculate, Connery-esque grooming—have kept others from noticing the gears he’s slipped. He carries himself with authority, barking commands and lecturing his fellow officers like a little demagogue. When Petri films him against a giant map of Rome, it looks like he’s posing in front of his property. In private is another matter, however, and Volonté keeps suggesting a deep insecurity lies at the root of his madness. A flashback to a scene in which the power dynamic between himself and Augusta shifted, one in which he became the masochist and she the sadist, is followed by some of his most brutal displays of power. Inside his brain, every action leads to an opposite, if not always equal, reaction.

Petri’s direction provides another window into the inspector’s frame of mind. His camera moves and swirls constantly: always restless, never settled. The film never settles, either. In his liner notes to this new Blu-ray/DVD edition, Evan Calder Williams notes a career-long habit in which “Petri borrowed, and then made strange from within, a number of recognizable genre schemata.” Investigation Of A Citizen Above Suspicion begins like a giallo, but soon pushes beyond even that genre’s outré boundaries, playing like a fever dream even before, in its final moments, it becomes one. A few years earlier, Petri imagined a science-fiction future obsessed with games of violence and power in the excellent The 10th Victim. Here, he shows the same sorts of games being played behind the scenes in the world of the present, one in which innocence and guilt have become a matter of who has the power to get away with it, and who is left to take the blame.

The main features here are two extensive documentaries about the director and star. The feature-length Elio Petri: Notes On A Filmmaker covers the whole of Petri’s career, from his beginnings as an assistant to the neo-realist Giuseppe De Santis to his ongoing frustrations with getting films made to his 1982 death from cancer at age 53. The hourlong Investigation Of A Citizen Named Volonté does the same for the film’s lead, who collaborated with Petri on several other projects. Elsewhere, Morricone reflects on his work with Petri, who also appears in a 1970 interview for French television.

GoWatchIt: Buy. Rent. Stream Investigation Of A Citizen Above Suspicion