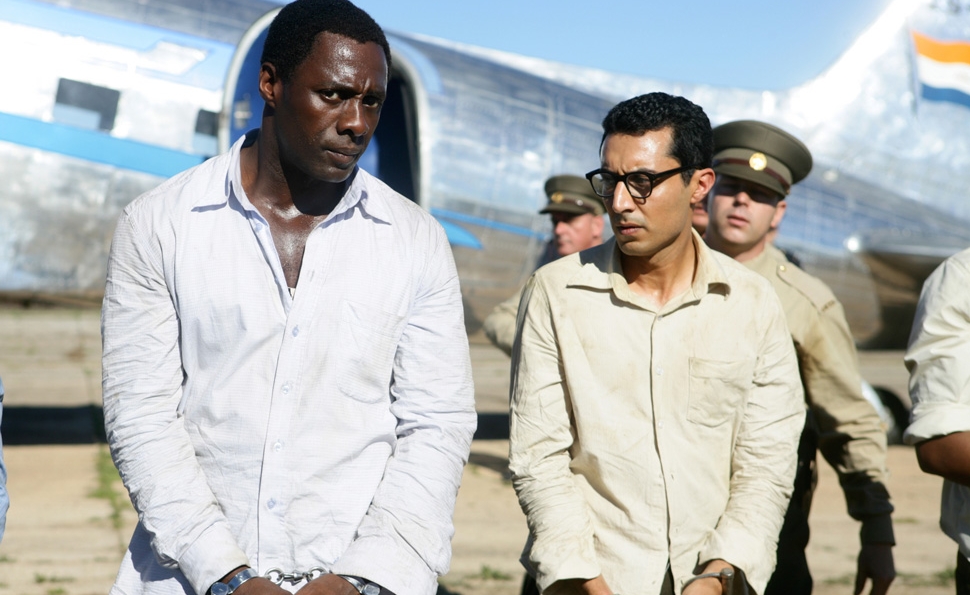 As a lesson in how not to make a historical biopic, Mandela: Long Walk To Freedom proves remarkably complete: It’s a dull, glossy, uncomplicated portrait of a man whose personal and political legacy is marked by serene idealism and shrewd calculation. A year after Steven Spielberg’s Lincoln boldly revealed the horse-trading and gamesmanship necessary to pass the Thirteenth Amendment, it’s discouraging to return to Great Figure filmmaking that acts more as monument than living history. Lurching from one major event in Nelson Mandela’s life to another, with little context or nuance, or even a particularly sticky narrative glue, Long Walk To Freedom lionizes Mandela without offering a shred of insight on him or his country. It’s a journey to a slow clap—one as much for itself as it is for Mandela.

Based on Mandela’s memoir—the screenwriter, William Nicholson (Gladiator), addressed South Africa previously with 1992’s Sarafina!—Long Walk To Freedom casts Idris Elba, the chameleonic British star of The Wire, in the lead role. Elba doesn’t look much like Mandela, but he carries himself with a dignity and authority that’s by far the film’s most compelling element, which makes its shortcomings all the more unfortunate. Like nearly all bad biopics, the film tries to cover the entire arc of its subject’s adult life, from his first marriage and early activities as a lawyer and African National Congress activist in Johannesburg to his 28-year prison term and subsequent triumph in negotiating an end to apartheid. That leaves Nicholson and director Justin Chadwick (The Other Boelyn Girl) with an overabundance of significant developments to cover, and their solution is to touch on all of them like an illustrated wiki.

The one major relationship explored in Long Walk To Freedom is the long, contentious marriage between Mandela and his second wife, Winnie (Naomie Harris), a social worker whose agitations against the white minority government took a more radical tack. When Mandela and nine other leaders of the ANC were handed lifetime sentences for various acts of sabotage in 1964, Winnie stayed with him while continuing to fight against apartheid, which led to her own time in prison, including 18 months in solitary confinement. The Winnie who emerges from captivity in Long Walk To Freedom is reborn an angry firebrand who advocates violence against both the authorities and anyone deemed an informant or traitor to the cause. Once Mandela is finally freed, he not only has to acclimate himself to married life again after two decades, but negotiate a political path that puts him at loggerheads with her.

There’s too much life in Mandela’s 700-page book to condense even to a snoozy 146 minutes, but Nicholson and Chadwick dutifully hit the bullet points anyway, reducing Mandela to a simple avatar of courage and peace, held aloft by Alex Heffes’ soaring score. What’s missing from Long Walk To Freedom is a deeper sense of Mandela’s pragmatism, his Lincoln-like ability to think through the politics and compromise necessary to achieve his goals. Harris is magnetic as Winnie, but the husband-and-wife dynamic isn’t as complicated as their personal history and conflicting agendas might have made it. She’s angry and violent; he’s shrewd and temperate. End of story.

In a film full of platitudes and booming tributes, there are glimmers of intrigue in Mandela’s negotiations with F.W. de Klerk (Gys de Villiers), the state president who brokered the deal to grant Mandela unconditional release from prison and allow the country’s black majority the right to vote. First confronted with de Klerk’s lieutenants, who try to press a power-sharing deal over “one person, one vote” democracy, Mandela threads a thin needle in defiance of the ANC, the government, and the more radical impulses of protestors to find a just way through for himself, de Klerk, and the country on the whole. Long Walk To Freedom could have used more of Mandela’s political canniness; instead, Bono plays us out.