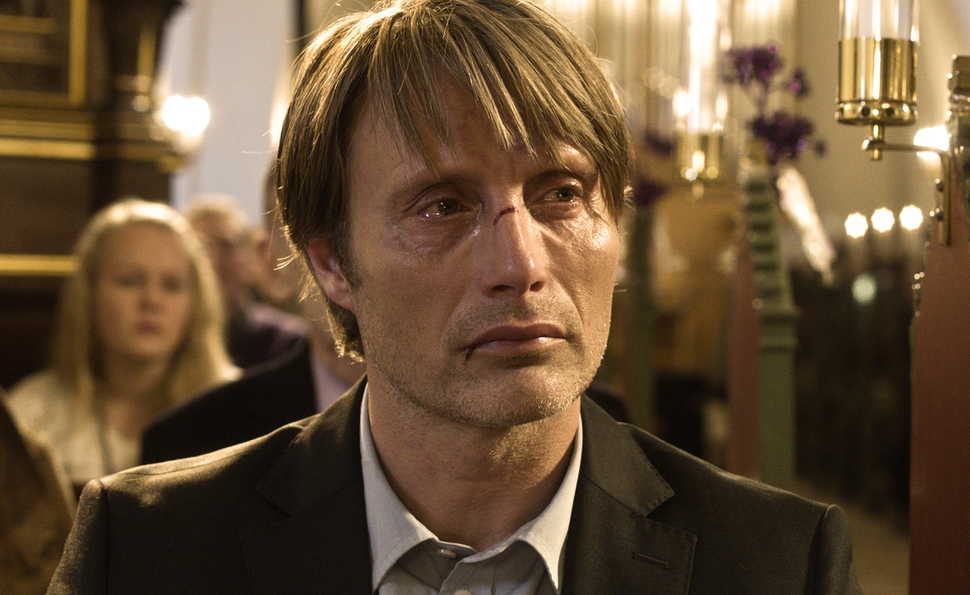 Danish director Thomas Vinterberg drew international attention with his anxious 1998 drama The Celebration, about a family reunion that deteriorates when one of the grown children publicly accuses his father of sexual abuse. Now, he’s considering the same situation from a different angle with The Hunt. Mads Mikkelsen plays a popular kindergarten teacher named Lucas who becomes the victim of a misunderstanding with one of his pupils, and gets branded as a pedophile in his small town. Suddenly his neighbors are fitting what they know about Lucas—from his broken marriage to his relationship with his son—into a pattern of dysfunction, so they can better define him as the monster they now believe him to be. And whenever one of their young children acts out or seems troubled, they presume Lucas is responsible, ignoring their own oft-troubled relationships. He makes a convenient scapegoat.

Vinterberg shot The Celebration as part of the Dogme 95 movement, using handheld video cameras for intentional rawness, but his films since have been more polished. The Hunt is downright luminous, with lighting that gives a subtle glow to the characters’ faces, framed strikingly against the chilly Danish autumn. When Lucas is first told that he’s been accused of molestation, for example, he leaves the meeting and heads out to the playground, where he’s shown in a slightly forced perspective, barely registering the children around him as he’s overwhelmed by a sinking feeling. The image tells what’s going on in Lucas’ head—which in turn tells the story.

The Hunt’s co-screenwriter, Tobias Lindholm (who previously made Submarino with Vinterberg), has garnered acclaim as the writer and director of his own smart suspense films, R and A Hijacking, as well as for his work on the TV series Borgen. Lindholm treats this material the way he’s treated much of his other work: as a muted thriller, in which the everyday becomes creepingly Hitchcockian. Vinterberg follows suit, using little push-ins with the camera to heighten the drama without overselling it—as in one tense scene where Vinterberg tracks closer and closer to a window during an ordinary conversation, building nervous anticipation for what’s about to come crashing through.

But while The Hunt skillfully puts viewers through the wringer, it’s often for no higher purpose than pushing buttons and generating outrage. Since viewers know Lucas is innocent, they can seethe at the injustice and feel a sense of righteous superiority as Lucas stands up to his ostracizers, who are making life miserable for him, his son, and even his dog. In this way, The Hunt works as simplistic, cathartic melodrama. It’s about ambiguity, but there’s nothing ambiguous about the film itself.

The Hunt is damn effective, though, for two big reasons. First off, Vinterberg and Lindholm realistically convey how one moment of confused spite from a 6-year-old can spin out of control, as therapists and administrators coax the child into expanding on her initial untruth, then consider her accusations too sensitive to probe further, lest they traumatize the girl. It doesn’t help that none of the adults can talk frankly about what Lucas is actually accused of doing, preferring instead to use euphemisms about him “doing things that are for adults only” with his “private parts.” So even though the police quickly determine that they can’t charge Lucas with anything, his reputation is ruined by vague, unexamined rumors.

The other thing The Hunt has going for it is Mikkelsen, who gets across what it really means for Lucas to lose the trust of his students’ parents. Early in The Hunt, Lucas has such an easy intimacy with his kids: wiping their bottoms, walking them home from school, and wrestling with them on the floor. After the accusation, he can’t even pick a child up for a hug without worrying that the gesture will be misconstrued. The innocence of those interactions has been spoiled, such that when Lucas defiantly shows up at his church’s Christmas Eve mass, he’s driven out of the sanctuary by the sound of the children’s choir, and the sweetness he’s no longer allowed to enjoy. Mikkelsen carries that pain brilliantly, expressing it as a mixture of defensiveness, frustration, and betrayal—along with a pining for the good life lost in an instant, when he accidentally hurt one kindergartner’s feelings.