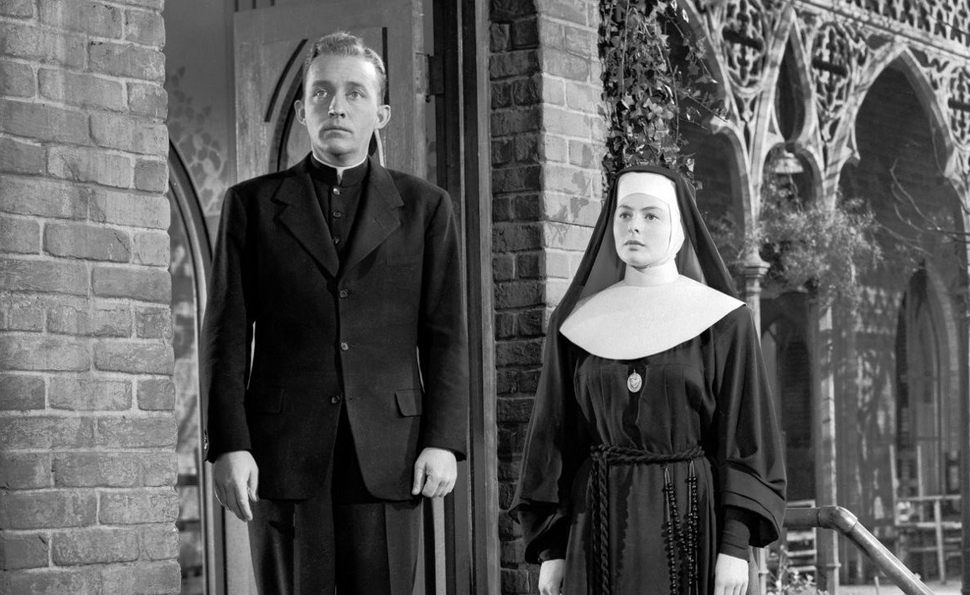 The Bells Of St. Mary’s

With the possible exception of Jesus, Bing Crosby might just be the best thing that ever happened to the Catholic Church. In the Oscar-festooned 1944 and 1945 smashes Going My Way and its sequel, The Bells Of St. Mary’s, Crosby presented the best possible image of the church as Chuck O’Malley, a gentle-hearted priest with kind eyes and a song in his heart. For decades, the films occupied such prime real estate in the public imagination that the image of a smiling Crosby in a clerical collar became nearly as synonymous with Catholicism as the Pope in full regalia.

In the liner notes for the otherwise spare new Blu-ray edition, film critic R. Emmet Sweeney notes that Going My Way and The Bells Of St. Mary’s were the top-grossing films the year they came out, and that, adjusted for inflation, The Bells Of St. Mary’s would outgross The Dark Knight Rises. It’s easy to see why: The films present a wonderfully reassuring vision of the Catholic Church as an unambiguous force for good, manned by charming, delightful servants of the Lord who dispense the gospel to adorable moppets and curmudgeonly old misers alike. O’Malley’s saga was so enduring that the character was brought back for a 1962 television series starring no less a legend than Gene Kelly, though that incarnation proved much less popular, and the show only lasted a season despite the star power onboard.

Directed by Leo McCarey, whose strange and remarkable résumé includes everything from Duck Soup to the hysterical anti-Communist melodrama My Son John, these films presented an appealing fantasy of Catholic life that resonated with audiences rattled by a world war. Crosby’s smile and lyrical lilt implicitly conveyed that everything would be okay, especially with God on his side. Released just a year after the blockbuster success of Going My Way, which won Best Picture, Best Director, Best Actor for Crosby, and four other Oscars, The Bells Of St. Mary’s finds O’ Malley transferring to a run-down old school doomed to be condemned, unless a miracle of some sort occurs. Miracles happen to be in O’Malley’s line of business, but even he is skeptical about Sister Benedict (Ingrid Bergman), who has a simple plan for saving the school: praying really hard that the miserable mogul next door (Henry Travers, playing a character with the Preston Sturges-worthy name of Horace P. Bogardus) will experience an unexpected change of heart and gift his spectacular new building to the suffering school. Travers went on to play Clarence the Guardian Angel in It’s A Wonderful Life a year later, and he clearly enjoys playing a man on the opposite end of the karma train, a mean-spirited old coot in desperate need of a Scrooge-like spiritual awakening. Bogardus gets just that when O’Malley enters his life to help the good sisters out of their bind.

To its credit, The Bells Of St. Mary’s seems to view its plot as a minor distraction it’s happy to work around. For a blockbuster starring two of the biggest movie stars in the world, The Bells Of St. Mary’s is shockingly, consistently low-key. McCarey and his cast and crew are never afraid to take their time and let scenes meander at a leisurely pace. Sweeney notes that McCarey ran a loose, playful, improvisatory set that informs one of the film’s most crowd-pleasing and memorable sequences, a simultaneously hilarious and adorable scene where a group of children roughly improvise their way through the story of Jesus and the manger in a manner that anticipates the slightly more grown-up naughtiness of the similarly revisionist Drunk History television show. In fact, many of the film’s most inspired bits feel off-the-cuff, like a cat delighting nuns by crawling under a hat while an oblivious O’Malley attempts to deliver an introductory speech, or Bergman’s coiled, purposeful body language as she immerses herself in the world of pugilism to help a bullied student defend himself. The unhurried pace of The Bells Of St. Mary’s is one of its many modest charms, but over the course of a 126-minute running time, it becomes a little problematic, especially once it introduces another huge, melodramatic subplot after the main plot has been resolved in an appropriately crowd-pleasing fashion.

The same qualities that make The Bells Of St. Mary’s quaint are also the qualities that make it, if not great, then at least solidly entertaining. It’s a film of intense and unapologetic wholesomeness and sincerity. While some of the subplots beg for the cutting-room floor, like one where Sister Benedict reunites the parents of a troubled child, the chemistry between the leads is simultaneously explosive and chaste; Crosby’s laconic ease brings out the impishness behind Bergman’s fine-china delicacy, and Bergman proves a surprisingly spunky and spirited comic foil for Crosby.

The Bells Of St. Mary’s hearkens back to a more innocent era, where the inspirational-priest movie wasn’t just a palatable subgenre, but a massive commercial force. It’d be impossible to imagine a film like The Bells Of St. Mary’s being made today, both because popular conceptions of priesthood have changed so dramatically, and because we lack a famously public Catholic like Crosby to make all that stern, unyielding morality go down smoothly—with a wink, a smile, and a catchy song.

Beyond the liner notes, none.