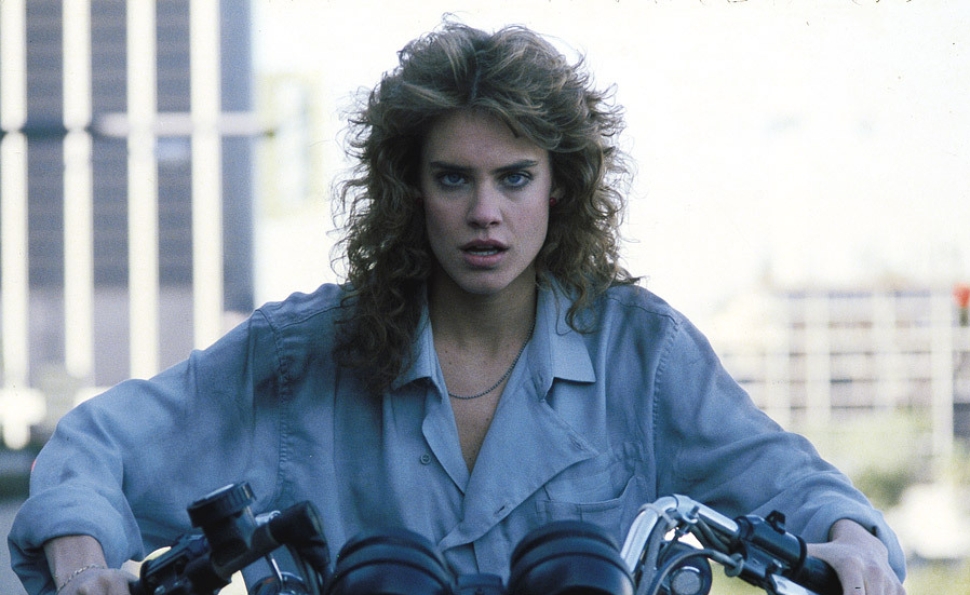 Night Of The Comet

“I just decided that putting Valley girls at the end of the world would be a really weird mixture,” Night Of The Comet writer-director Thom Eberhardt says on the audio commentary of the film’s new Blu-ray and DVD edition. But part of what makes Night Of The Comet so charming, and accounts for the cult following it’s accumulated since its low-key release in 1984, is how little it treats that pairing as weird. The film opens with an apocalyptic event—a too-close encounter with the eponymous comet—that wipes out anyone not lucky enough to have spent the night in some kind of steel enclosure. That doesn’t leave many survivors behind, but it does leave Reggie (Catherine Mary Stewart) and Sam (Kelli Maroney), a pair of sisters uniquely suited to life after the apocalypse, thanks to their seeming unflappability and their handiness with automatic weaponry.

The latter is explained by a dad who’s doing some work for the government in Central America, a touch as unmistakably 1980s as the pastel-and-neon color scheme of a radio-station set, and the synth score, which sounds like it’s made up of discarded John Carpenter cues. But part of the appeal comes from Eberhardt’s decision not to push the comedy too far. Night Of The Comet was produced by Andrew Lane and Wayne Crawford, the team behind Valley Girl, and Eberhardt attributes its existence to that film’s success. (A Valley Girl poster even hangs in the back of one scene.) But even with their combat skills and big hair, Reggie and Sam mostly seem like ordinary teens trying to make the best of a Los Angeles that’s been suddenly emptied out. Apart, that is, from the zombies.

Night Of The Comet borrows freely from everything from The Omega Man to Romero’s zombie films to Repo Man, but it never borrows so heavily as to feel like a rip-off of anything. Instead, it feels like an homage to everything, as its likable heroines slowly wander through a movie wasteland filled with familiar landmarks: Zombies! Abandoned malls! Doomsday bunkers! There’s nothing urgent about Eberhardt’s direction or the film’s plot, which eventually puts Reggie, Sam, and fellow survivor Hector (Robert Beltran, fresh off Eating Raoul) in conflict with a group of scientists seeking a cure for zombieism. (Their ranks include Clint Eastwood regular Geoffrey Lewis and cult favorite Mary Woronov, also fresh off Eating Raoul.) Even the zombies don’t seem like that great a threat: There aren’t that many of them, and they aren’t particularly hard to defeat. The pace can be frustrating at times, but it also lets the film spend more time with its characters and with lyrical shots of a people-free L.A., which, in a nice bit of commentary, has grown so automated and artificial, it doesn’t really need people to keep going. The traffic lights keep changing, the sprinklers turn on at the same time each day, even the welcoming voice of a DJ playing the hits of the day is pre-recorded. Maybe Sam and Reggie were the only living girls in L.A. all along.

The supplements include several expected but well-done features, including interviews with Stewart and Maroney (they’re still friends!), Beltran, and makeup artist David B. Miller, alongside a trailer and archival photos. Less expected: three audio commentaries. On his track, Eberhardt talks about how the film’s long life has exceeded his expectations. (“I have a vision of myself on my death bed, just before I’m about to check out, with friends and relatives around me. Just as everything is going dim, I hear a voice in the back of the room say, ‘Wait a minute? He directed Night Of The Comet?’”) Stewart and Maroney share fond memories on a chummy track, and production designer/effects designer/second-unit director John Muto, a Roger Corman veteran, explains how they made a little money go as far as possible.