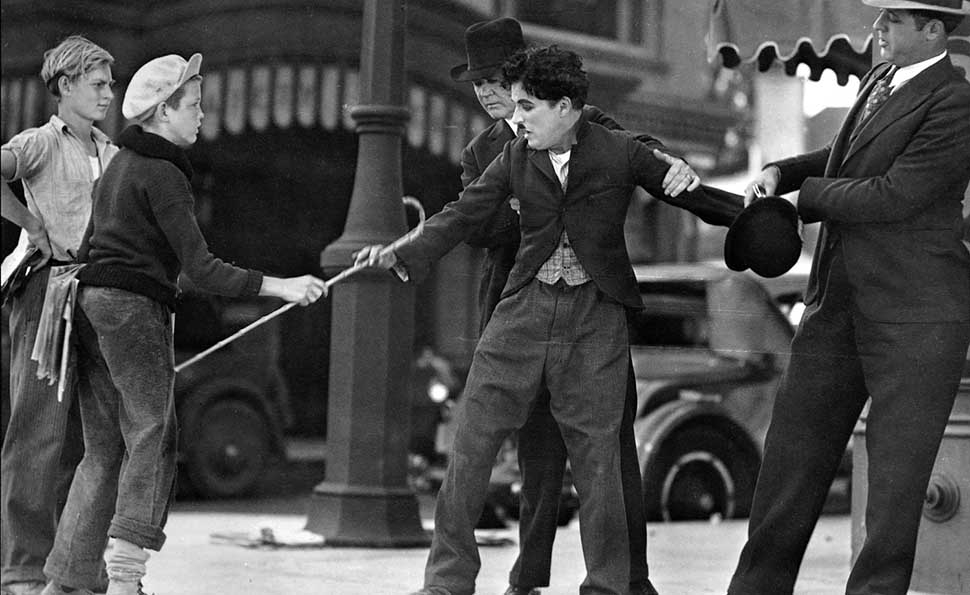 The Jazz Singer, the first movie with synchronized sound, debuted in fall 1927. Charlie Chaplin’s City Lights was released in spring 1931. In the nearly four years between them, the Silent Era ceded almost entirely to talkies, but Chaplin and his Little Tramp character held out, and continued to hold out, to an important degree, through Modern Times in 1936. Yet it’s important to note that City Lights isn’t strictly a silent comedy (nor is Modern Times, for that matter), but one that employs sound sparingly, and to very particular effect. There’s an original score, composed by Chaplin himself; a specific cue associated with his blind love interest; and moments when sound enhances the comedy, like the wah-wah gibberish voices (popularized much later in Charlie Brown cartoons) of officials at a monument dedication, or the sequence where The Tramp swallows a whistle. Point being, Chaplin didn’t appear to be resisting change because he was stubbornly resisting a new era, at least not entirely; he just took sound as another arrow in the quiver.

City Lights’ titles bill it as “a comedy romance in pantomime,” which was as far as Chaplin was willing to go to prepare audiences for more of the silent comedy he’d always done. He gambled that no one would want to hear their beloved Little Tramp say a word, and the gamble paid off in one of the biggest hits of his career—in part, perhaps, because his deft physical comedy stood apart from the clunky staging necessary to accommodate early sound features. It also makes absence a theme: Here’s a movie about a man who never speaks, courting a woman who can’t see, so their love is expressed in gestures of kindness, and restricted by sensory barriers. There’s a purity to it that’s unlike any screen romance, and its poignance suffuses the entire film, even when it breaks off into tangentially related comic vignettes.

As City Lights opens, The Tramp is… well… The Tramp, a homeless, penniless figure of fun with his bowler cap, cane, and penguin walk—all so conspicuous that even the corner newsboys feel emboldened to bully him. When he meets the lovely Flower Girl (Virginia Cherrill), she literally can’t see him as a buffoon, and he can reinvent himself as a gentleman worthy of her affections. His deceptions are supported by the fortune of an Eccentric Millionaire (Harry Myers) he saves from throwing himself into a canal, earning the man’s friendship and charity for life. But there’s a catch: The Millionaire only recognizes The Tramp when drunk. When The Tramp learns the Flower Girl needs $22 to save her and her Grandmother (Florence Lee) from eviction, he assures her that he’ll come to the rescue—and perhaps, if he’s really lucky, come up with the money for surgery to cure her blindness.

To a degree, the plotting merely strings together inspired bits of comic business, like The Millionaire taking The Tramp out on the town, where he can slip around the dance floor and scandalize the urban elite, or The Tramp ducking into a boxing hall to earn rent money via a fixed match, only to be thrown into the ring in a “winner takes all” contest with a serious brawler. (Chaplin’s staging of the fight, with The Tramp slipping in sucker punches while dancing and ducking around the referee, is perhaps the film’s funniest. It also uses one sound, the ringside bell, to uproarious effect.) But the story also pivots on a beautiful act of romantic self-sacrifice: The Tramp could probably sustain the illusion of being a well-to-do gentleman as long as he’d like, but he chooses to pay for a surgery that will surely lead the Flower Girl to see him for who he really is, and reject him like everyone else.

All of which leads to one of the greatest endings in cinema history, with The Tramp appearing to the Flower Girl as a disheveled stranger, as pitiable as ever, and her surprising him with a spark of recognition. Later, when Chaplin reflected on City Lights, his favorite of his movies, he said he wasn’t acting in that scene. The complexity of his response—a swell of so many emotions, all registering on cinema’s most iconic face—bears that out. It also speaks to the film’s overall virtues, which showcase the full range of his talent as a comic and tragic figure, and a filmmaker capable of making audiences laugh at his tomfoolery and empathize with his plight. There’s dignity and folly to The Tramp in City Lights, and everything in between.

Behind-the-scenes footage comes standard in DVD/BDs of contemporary films, which are all documented thoroughly for promotion and posterity. But seeing 16mm footage of Charlie Chaplin working on one of the greatest films of all time is a wondrous piece of history. The scene where The Tramp meets the Flower Girl took several non-sequential months to shoot and 342 takes, which might account for the tensions between Chaplin and his untrained actress, Virginia Cherrill. It’s nonetheless mesmerizing to watch Chaplin work with Cherrill and his cinematographer on blocking the scene, and historian Hooman Mehran offers good context via voiceover. Elsewhere on this features-packed disc is a terrific commentary track by Chaplin biographer Jeffrey Vance, who talks about Chaplin’s irreverent dismissal of dialogue as “superfluous noise,” unpacks key scenes, and goes into detail about the filmmaker’s method of accumulating lots of ideas before eliminating and refining them. The short film “The Champion,” from 1915, reveals some precedence for the moves in the big boxing sequence, and in a feature on Chaplin’s unique studio deal, visual-effects expert Craig Barron marvels at the independence Chaplin’s celebrity bought him, allowing him to build his own sets and develop a movie over the course of months or years without anyone looking over his shoulder. The only disappointing feature here is “Chaplin Today: City Lights,” which focuses mainly on his impact on animation, more narrowly still on Aardman Animation co-founder Peter Lord, who does most of the talking.