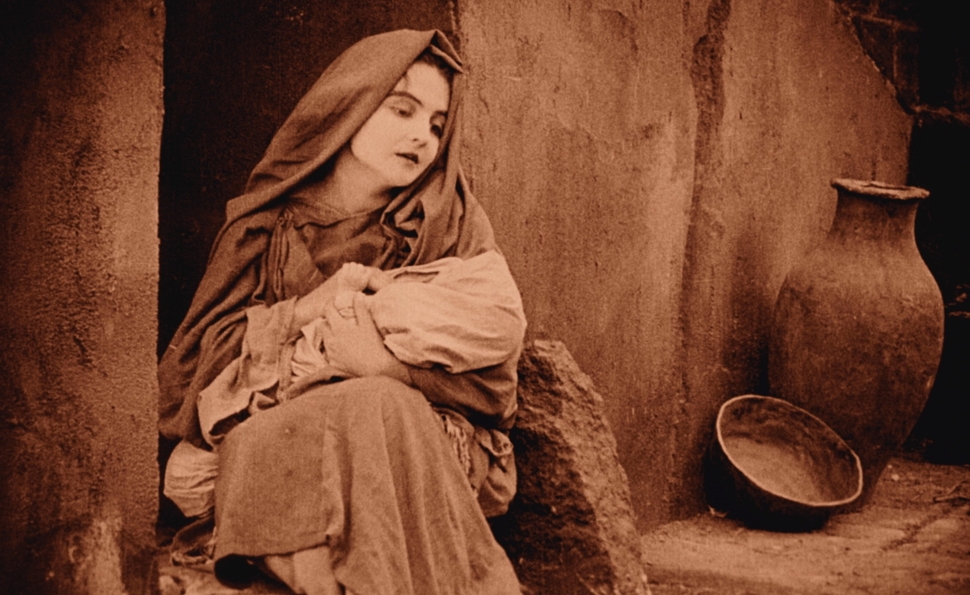 When D.W. Griffith wrote, produced, and directed 1916’s Intolerance, there had never been any film like it in scale, not even Griffith’s notorious 1915 masterpiece The Birth Of A Nation, which galvanized the country with its images of the Civil War and the Reconstruction. Intolerance began life as The Mother And The Law, a much more modest contemporary tale about industrial-age clashes and censuring reformers, but after the response to The Birth Of A Nation, which was banned in several cities and decried for its racism and championing of the Ku Klux Klan, Griffith folded his new project into a sprawling, three-hour jeremiad on intolerance throughout the ages. To the modern story, Griffith added plotting that led to the St. Bartholomew’s Day Massacre in 1572 Paris, the persecution of Jesus, and the fall of Babylon, together creating a symphony of betrayal, hypocrisy, and yes, intolerance, that illustrates “love’s struggle throughout the ages.” The ambition is absurd, and nearly a full century later, the film is still an absolute wonder to behold.

If there’s any justice, the release of a beautiful new Blu-ray of Intolerance—with a dramatic orchestral score by Carl Davis, who composed it for a London revival of the film in the 1980s—should bring cinephiles back to Griffith, who seems to have fallen out of favor due to the shroud of Birth Of A Nation and a perceived lack of sophistication. Though everyone will acknowledge Griffith’s importance in assembling the building blocks of cinematic storytelling, the scare-quoted “importance” ossifies him, relegating him to a few sleepy mornings in Film History 101 classes. There’s a tendency to bypass Griffith and go straight to the Soviets, the German expressionists, or the comic trinity of Charlie Chaplin, Buster Keaton, and Harold Lloyd. This is a terrible mistake for several reasons—not least because Griffith’s career includes delicate wonders like True Heart Susie alongside his titanic visions—but the primary one is this: Intolerance is thrilling and vital, a collision of historical periods that feels as earth-shaking as the movement of tectonic plates.

Part of the thrill of Intolerance is witnessing the medium grow up in real time, as Griffith slowly, then more rapidly cuts between one story and the next, reaching a fever pitch that veers awfully close to montage. But Griffith makes his thematic intent explicit from the start, like a theorem the audience can expect his film to support. Casting the motherly Lillian Gish for a mesmeric interstitial that connects one storyline to the next with the phrase “Out of the cradle, endlessly rocking…,” Griffith initially offers sizable chunks of each segment before switching over to the next. (A tactic Cloud Atlas, to name Intolerance’s most recent disciple, might have benefitted from doing.) The parallels take time to develop—the decision even to have Gish’s interstitials undermines them further—but the film gains in urgency and purpose as the cradle rocks faster and faster.

The four stories aren’t of equal length: Griffith spends the least time by far on the Biblical story, just enough to use Jesus’ crucifixion as a devastating point of emphasis on the other three. The story of the St. Bartholomew’s Day Massacre strengthens the themes of religious intolerance and the murderous abuses of the powerful, detailing the sinister behind-the-scenes plotting that led Roman Catholic royals to slaughter the Protestant Huguenots. But the heart of Intolerance is in the chronological bookends: The modern story, about a couple’s tragic plight—instigated first by a mill strike, and later by a frame-up and the intervention of moralist “charities”—taps into turn-of-the-century frustrations about big business and temperance intervention. And the spectacular 539 B.C. story, about the conflict between Prince Belshazzar of Babylon and the invading Cyrus The Great of Persia, locates a point in history where the greatest of societies was destroyed by humanity’s worst impulses.

Intolerance doesn’t have much psychological complexity, which Griffith seems to recognize in giving his non-historical characters names like The Boy, The Dear One, and The Musketeer. And while Griffith captures the zeitgeist in the modern story, with its plainly personal indictment of moral hypocrisy and persecution, he casts his eye toward the larger forces of history at play. It only takes some sinister whisperings from the powerful few to affect the tragic trajectory of the many—the betrayals of a high priest in Babylon, Catherine de’ Medici’s influence over the royal court, the slashing of mill workers’ pay by 10 percent—and Griffith expands the frame to give audiences a sense of mass devastation. The Persians’ first, ultimately failed siege on Babylon has a grandeur unprecedented in cinema then, and probably not equalled since: towering sets, teeming hordes of extras storming a great fortress, immense ladders, elephants pounding the walls. It’s like watching the Egyptian pyramids being built, an effort of seemingly impossible scale.

For his hubris, Griffith was rewarded with a flop, at least in relation to the prohibitive cost of making Intolerance, but it may be his greatest achievement, a living monument to the early-20th-century turmoil that summoned it to life. Though the modern story has a melodramatic kick, that segment and the others  have the overall effect of rendering humanity small and eternally vulnerable to the corruption of the powerful. Griffith arranges a rousing ending for his put-upon couple, but it’s hard to shake the impression that their fate ultimately rests on other people’s whims. And our fates, too.

A booklet includes two essays: One by historian William M. Drew that covers the production’s genesis and reception, and a critical piece by Cineaste’s Richard Porton. The second disc has two full features, The Fall Of Babylon and Mother And The Law, that isolate Intolerance’s most prominent storylines and make a case for the individual merits of each. Historian Kevin Brownlow also contributes an insightful 20-minute video interview called “Three Hours That Shook The World,” in which he argues the film’s merits while gently pointing out the one intolerance that was conspicuously absent from it: racial intolerance.