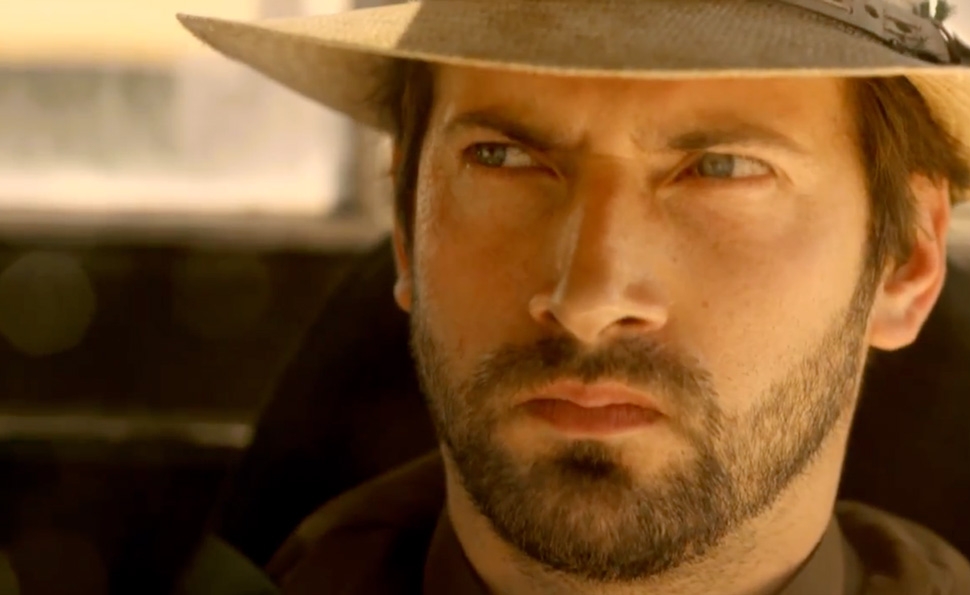 “Surreal” is a kind way to describe Nightscape, but “insanely incoherent” is far more accurate. All the euphemisms in the world can’t salvage this paranormal hot-rod clunker, which plumbs new depths of incomprehensibility. Writer-director David W. Edwards has created a thing of almost perfect unintelligibility, stitched together from the spare parts of prior genre efforts with almost no concern for pacing, character, or even basic lucidity. People do breathe, speak, walk, and sleep during this saga. Otherwise, however, it doesn’t feature any behavior that registers as logical, much less compelling.

Edwards’ story concerns Kat (Emily Galash), a drifter with self-described “black luck” who, at the outset, has paired up with Smoke (Joshua St. James), a former race-car driver with a crippled leg and equally lousy fortune, as evidenced by a pathetic loss at a drag race that costs him his ride. Kat and Smoke speak in absurd faux-Southern accents that are made even more egregious by Edwards’ writing, which—whether in dialogue, or Kat’s intermittent “Dear Diary” narration—trades only in pronouncements vainly striving for roughneck crime-fiction poetry. Despite Smoke’s assertion, “I like my stories true-life,” he and Kat’s blathering sounds like a bad parody of dime-store novel pulp, and that goes double for the every utterance of El Buitre (Jorge Elias Madrid), a Latino cowboy who comes to their rescue after they stumble into a rural store and find everyone dead save for one waitress, whose head promptly explodes to reveal a giant tentacled demon thingie.

El Buitre has a magic gun that can kill such creatures, though he’s really on the hunt for an unholy white roadster he’s dubbed “El Muerte Blanca.” The vehicle is some sort of living beast (it has flesh pulsating beneath its panels) that spreads chaos and death wherever it roams, and El Buitre has taken it upon himself to chase and destroy it, all so he can “translate out” of Earth, whatever that means. Such oblique gibberish is incessant throughout the film, which has El Buitre describing El Muerte Blanca as “a prophesy of chaos,” and state that his adversary appears whenever “the system presses on us too much,” nonsense that’s in keeping with discussions about how the “Christian God is dead,” and Earth is in slow decay. “There’s a full hell of madness over these hills,” he opines at one point, but the real madness is in every spoken word of Edwards’ laughably garbled script.

Uniformly wooden performances, flashbacks that are never properly explained, smeary special effects, and CGI that would be embarrassed to appear on the SyFy network round out Nightscape. And yet even those failings don’t fully convey the mind-boggling confusion elicited by Edwards’ storytelling. After a final confrontation with El Muerte Blanca that leads to absolutely nothing, a coda reveals that El Buitre is, in fact, some sort of Indiana Jones-style supernatural adventurer in the employ of a prim-and-proper British lady. Alas, even that left-field revelation doesn’t help making heads or tails of these proceedings any easier—though it does suggest a more interesting film lurking beneath the exterior of this baffling mess.