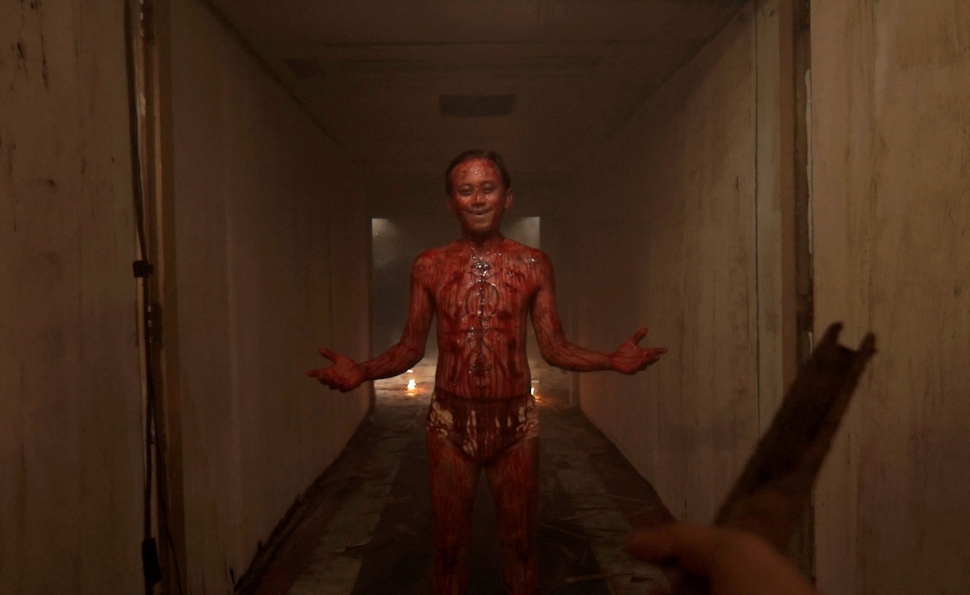 For a film named after outdated technology, the 2012 horror anthology V/H/S was powerfully plugged into its cultural zeitgeist. The multi-director festival favorite adroitly channels contemporary anxieties about the evolving nature of technology, and the way it affects our perceptions of ourselves, our relationships, and an outside world we increasingly navigate through the lenses of tiny cameras. It exploits the glitchy, imperfect nature of inexpensive handheld video to sometimes terrifying effect.

V/H/S makes a virtue of its limitations, financial and otherwise. The film’s low-budget, low-fi aesthetic lends it an air of grungy verisimilitude, contributing to the sense that viewers have stumbled into a forbidden realm, where they’re watching things that should never be seen. There’s something inherently creepy about malfunctioning technology, in the way it seems simultaneously more monstrous and more human when it begins to break down. V/H/S spins that idea into a surprisingly cohesive feature, even though it was helmed by multiple directors, including Ti West of The House Of The Devil/The Innkeepers fame, and mumblecore fixture Joe Swanberg.

But V/H/S ultimately has more on its mind than harnessing the creepy crackle of primitive VCRs, or the unnerving nature of Skype. The film also toys with the warped, misogynistic gender politics of horror movies—particularly slasher movies—in subversive, surprising ways, while still delivering the B-movie goods of sex, scares, and alternately gratuitous and pointed nudity.

But where V/H/S has a strong overarching vision that makes it more than the sum of its parts, the same can’t be said of its inevitable sequel, V/H/S/2. The follow-up has a substantially bigger budget and boasts participation from the likes of The Raid: Redemption director Gareth Evans, and Eduardo Sanchez, who co-directed The Blair Witch Project, the mother of all found-footage shockers. But what’s been gained  in V/H/S/2 pales in comparison to what’s been lost.

V/H/S/2 boasts a wraparound story conspicuously like its predecessor’s. This time, the framing device involves a pair of private investigators who specialize in catching cheating husbands in the act. They stumble upon a series of VHS tapes chronicling sinister goings-on, which make up the bulk of V/H/S/2.

Adam Wingard, a veteran of the first film, directs the first tale of technological terror, “Phase 1 Clinical Trials.” It’s a Cronenbergian saga of a man who loses some of his eyesight in a car accident and receives a computer eye with a video camera inside it, which documents his life for the benefit of the shadowy corporation that created it. But the eye has some unfortunate side effects, most notably the ghoulish, possibly undead creatures the man keeps seeing.

Sanchez and Gregg Hale, both of Blair Witch Project fame, developed the disappointing next segment, “A Ride In The Park,” about a cheerful cyclist who straps a camera onto his head just in time to document a series of zombie attacks. The use of handheld and surveillance footage is designed to give the segment an intimate, contemporary charge, but it often feels like a cheap gimmick to lend a little juice to tired old horror-movie tropes.

Evans and Timo Tjahjanto co-direct the anthology’s most ambitious, accomplished vignette, “Safe Haven,” about a journalistic outfit given access to a mysterious Indonesian cult leader rumored to have committed sexual transgressions with the children in his care. Evans cultivates an aura of danger and unease even before the segment takes a trippy supernatural turn, eventually devolving into bloody chaos.

In Jason Eisener’s contribution, “Slumber Party Alien Abduction,” the Hobo With A Shotgun director attempts to re-create the singular combination of childlike wonder and dread that characterized 1980s Steven Spielberg productions like Gremlins and Poltergeist. The segment’s child’s-eye-view of an alien attack starts off promisingly, but like too much of the rest of the film, loses focuses and direction as it proceeds. V/H/S boasted a level of characterization unusual for the genre, so it’s disencouraging that the most memorable character in its sequel is the cute little dog that figures prominently in Eisener’s segment.

Where V/H/S feels deliberately homemade, V/H/S/2 boasts a slickness that’s distracting and counterproductive. The production values and sleeker camera moves work against the grimy realism and intimacy that distinguish the film’s overachieving predecessor. And the earlier film’s obsession with the complexities of gender and sexuality has largely been abandoned, along with its streak of blood-splattered dark comedy. V/H/S’ vision, ambition, and cohesion are rare in a horror anthology, whereas V/H/S/2 is content to recycle the conventions and stylistic restrictions of the original while pursuing the default vision of just about every horror sequel: more of the same, with less inspiration, a bigger budget, and more gore. That’s never been a winning trade-off when it comes to horror films, and V/H/S/2 is no exception.