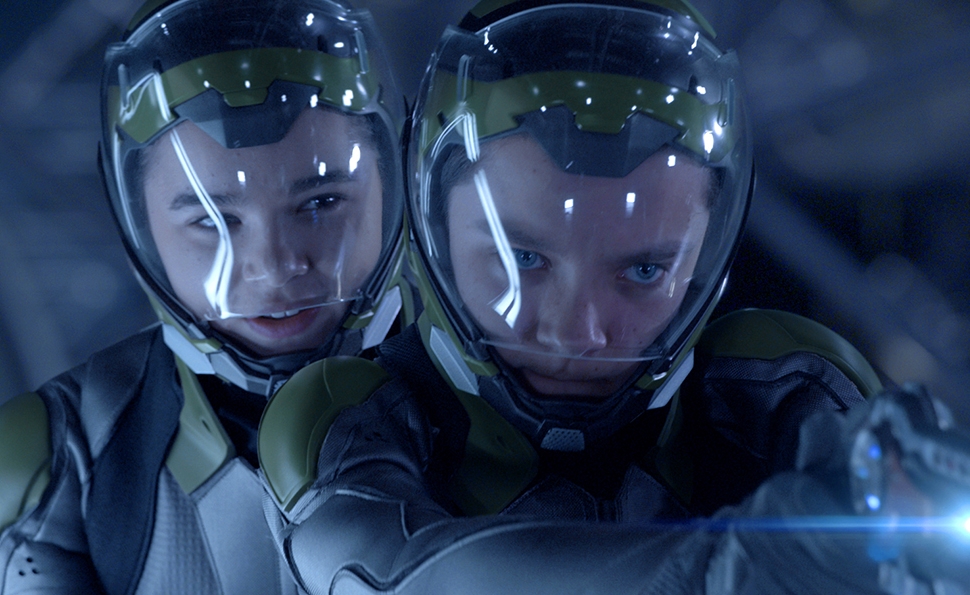 The science-fiction film Ender’s Game revolves around a future war between humanity and an insectoid alien race called the Formics, but the real fight is over the soul of a single child. The idea of a big, external battle as a backdrop for a small, internal one is as old as war stories, but writer-director Gavin Hood, adapting Orson Scott Card’s award-winning 1985 novel (expanded from Card’s 1977 short story) makes both battles here big and external, with characters explaining the subtext loudly, curtly, and emphatically. Card’s novel isn’t subtle about the way his eponymous protagonist is caught between his humanity and his ruthlessness, but Hood’s version blows the conflict up to vast proportions. Like the Formic War, it’s stretched and splattered across every inch of the screen.

Twelve-year-old Ender (Hugo star Asa Butterfield) is his parents’ third child, in a era when Earth law requires couples to apply for special permits to exceed two offspring. As a “Third,” he’s held in contempt and relentlessly bullied, and he’s obsessed with earning his contested right to exist, in part by succeeding in the competitive military program that rejected his distant, emotionally inaccessible father; his too-gentle older sister Valentine (Abigail Breslin); and his too-sadistic older brother Peter (Jimmy Pinchak). Ender gets his chance after he responds to bullying by getting a persistent enemy down and viciously kicking him, long after the other boy stops posing a threat; later, he explains he didn’t just want to win the first fight, he wanted to win them all at once. His combination of mercilessness and forethought exactly fits the bill for high-ranking military commander Colonel Graff (Harrison Ford), who whisks Ender off to the vast, sleek space station known as Battle School. As Graff explains to Ender, children can integrate and interpret complex data faster than adults, which makes them better battle commanders. What he doesn’t explain is that most kids aren’t heartless enough for war, unless they’ve been brutalized away from empathy and emotion. That’s Graff’s secret mission in Battle School: to sharpen natural tactical thinkers into miniature sociopaths, and send them to war.

There’s strong political potential in the way Ender’s Game echoes concern about drone strikes, where young, videogame-trained pilots miles from the battlefield can remotely kill human targets without ever feeling responsibility or connection. But Ender’s Game never feels relevant to the present. On the one hand, it’s a slick, blockbuster-friendly science-fiction spectacle, focused on the shiny, sterile special-effects shots of Ender playing games in zero gravity, or waving fleets of CGI spaceships into battle. On the other hand, it’s a clumsy allegory that posits all women as selfless nurturers and all men as competitive bullies, and demands that Ender—like Jack in The Tree Of Life—decide which model to follow. He sees this dynamic play out over and over, with paired couples facing off about whether to protect or dominate him: his mother and father, Valentine and Peter (whose extensive Earthbound political maneuvering has been cut from Card’s story), his schoolmates Petra (True Grit’s Hailee Steinfeld, fresh off Romeo & Juliet) and Bonzo (Moises Arias), and Graff and Major Gwen Anderson (Viola Davis), who clash over whether it’s worth deliberately destroying Ender’s humanity to make him the commander they need.

It’s a brutal story and a heady high-concept idea, but it plays out through characters with no identity other than their symbolic ones, and through shouted, simplistic arguments that repeat the same points over and over. Ender himself isn’t any more nuanced; Butterfield plays him with soulful eyes up top and a grim glower below, but doesn’t inject any humanity into his stiff soapbox speeches about how he refuses to be manipulated any more, or how he destroys his enemies by coming to know and love them.

It doesn’t help that every point of Ender’s world seems familiar from a recent fantasy model. Card’s novel preceded the Harry Potter books by more than a decade, but J.K. Rowling’s novels have overshadowed his, and at this point, it’s nearly impossible not to see Hood’s film as Harry Potter in space: There’s the a special school full of uniquely talented children, all simultaneously in awe of Ender and resenting his status as the clearly designated Chosen One. Petra and the diminutive Bean (Aramis Knight) become Ender’s Hermione and Ron; Bonzo is his bitterly vindictive rival Draco. There’s a Hagrid (Game Of Thrones’ Nonso Anozie, as a loudmouthed, soft-hearted sergeant), a Dumbledore-and-McGonagall pairing in Graff and Anderson, and even a Quidditch equivalent in that zero-G laser-tag-esque sport, which becomes an obsession for everyone in Battle School. (Like Quidditch, the game even combines complicated rules that never really matter with a simple, high-scoring move the protagonist can exploit to make the rest of the game moot.) And beyond all that, like Harry Potter, Ender is ruled by his obsession with his lost parents, particularly his conflicted feelings about his father.

But even the familiarity of virtually every element of Battle School takes a back seat to that clumsy battle for Ender’s heart and mind, and the strident, simplistic way Hood flings it at the audience over and over. Card is controversial for his regressive, outspoken views on sodomy laws and gay marriage, and his sloppy subtext when it comes to his own gay characters. Internet groups have organized boycotts of Ender’s Game in hopes of denying Card (who also co-produced the film) a larger payday. And the book has also been controversial over the years for the way it justifies violence while excusing its protagonist’s excesses. But while the film’s gender politics are rigid, outdated, and boring, and its present politics clunky to nonexistent, Card’s opinions on relationships, morality, and war aren’t really the problem with the film adaptation. The issue is that it’s a bombastic action blockbuster that delivers explosions and thematic development at the exact same ear-splitting volume.