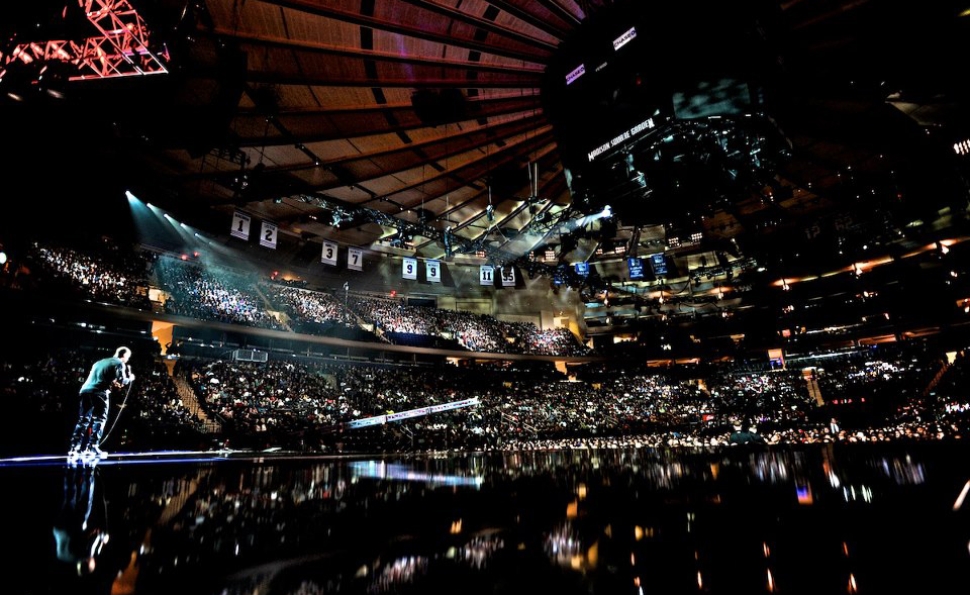 Kevin Hart: Let Me Explain makes one thing absolutely clear: Comedian Kevin Hart is a showman. He’d have to be, to sell out two nights at the 30,000-seat-capacity Madison Square Garden, the setting for the bulk of Let Me Explain. As Hart ping-pongs across the stage in a black leather shirt and gold chain, occasionally calling forth fountains of flame to celebrate a particularly successful punchline, it’s easy to see why he’s ascended to the rarefied ranks of comedians who can sell out the Garden—thus far a feat only achieved by Andrew Dice Clay and Dane Cook, though Hart’s act traces its lineage to stadium-packing forebears like Eddie Murphy, Martin Lawrence, and The Original Kings Of Comedy. Hart is a little man with a big presence that warrants the big-screen, feature-length presentation of Let Me Explain; unfortunately, he’s the only thing that warrants it.

In the early going, before transitioning to Hart’s hourlong MSG set, Let Me Explain feints toward being something more than a very good, theatrically released standup special. A scripted opening set at a mix-and-mingle event he threw presents him with a cavalcade of people asking pointed questions about the quality of his fame and personal life, until Hart eventually snaps, running off into the night to go to the Garden, where he promises “to explain.” It’s the type of skit that might open any cable-TV standup special, presenting the loose themes that will run through the subsequent material, to be played on the overhead monitors before the comic rushes out onstage to thunderous applause.

Except that isn’t what Hart does. Rather than moving straight from the introductory skit to the standup act that’s the film’s raison d’être, Let Me Explain makes a puzzling detour into the realm of half-assed tour documentary. In a brief travelogue sequence that follows Hart as he tours through Canada and Europe, Let Me Explain teases a handful of interesting angles on his fame that are begging to be further fleshed out, but never are. The genesis of Hart’s unexpected overseas repute, fueled almost entirely by YouTube clips and foreign affection for Soul Plane, is treated as an offhand aside. Footage of wacky tour-bus and behind-the-scenes antics prominently feature Hart’s posse of gregarious friends, known as the “Plastic Cup Boyz,” who are never satisfactorily introduced or differentiated from each other, despite their obvious importance in Hart’s life. There are significant cultural barriers between Hart and his audiences in Sweden and Norway, but they’re shrugged off via man-on-the-street footage of Hart awkwardly interacting with them. And most tellingly, there’s a concluding interview where Hart’s friends tout him as becoming “the young mogul he really wants to be” and “a global brand,” as if they’re presenting Hart to potential investors. (The trailer for Let Me Explain is made up almost entirely of footage from this part of the film.)

Spanning only a few minutes of the film’s already-svelte 75-minute run time, this preliminary footage teases an intriguing documentary/concert-film hybrid that Hart could easily carry. (He’d certainly be a more interesting subject than Katy Perry or Justin Bieber, who have both gotten the big-screen bio-concert-doc treatment recently.) But it ultimately ends up being nothing more than a brief commercial for the Kevin Hart brand, suitable for playing before the standup special begins. It’s an ungainly, misleading entry into the live-performance portion of Let Me Explain, which thankfully is lively and hilarious enough to mostly erase the memory of the introduction’s unfulfilled expectations. Mostly.

As a standup performance, Let Me Explain features Hart in top form, mixing hilariously profane personal anecdotes about getting caught lying to his ex-wife with silly absurdities, such as a sprawling bit where he imagines an elaborate excuse for being late to work. (It somehow involves both a man with Benjamin Button disease and a deer-zebra hybrid called a deerbra.) The MSG audience is vocally appreciative of Hart, and their reactions are infectious, despite being indifferently captured by cameras that don’t seem to be operating with movie screens in mind. But other than the idea that such a large persona deserves a large format, there doesn’t seem to be any deeper consideration given to why Let Me Explain needed to be a feature film rather than a more traditional television special. The Kevin Hart brand is clearly doing well, but Let Me Explain doesn’t seem interested in providing anything more than a surface-level presentation of the product.