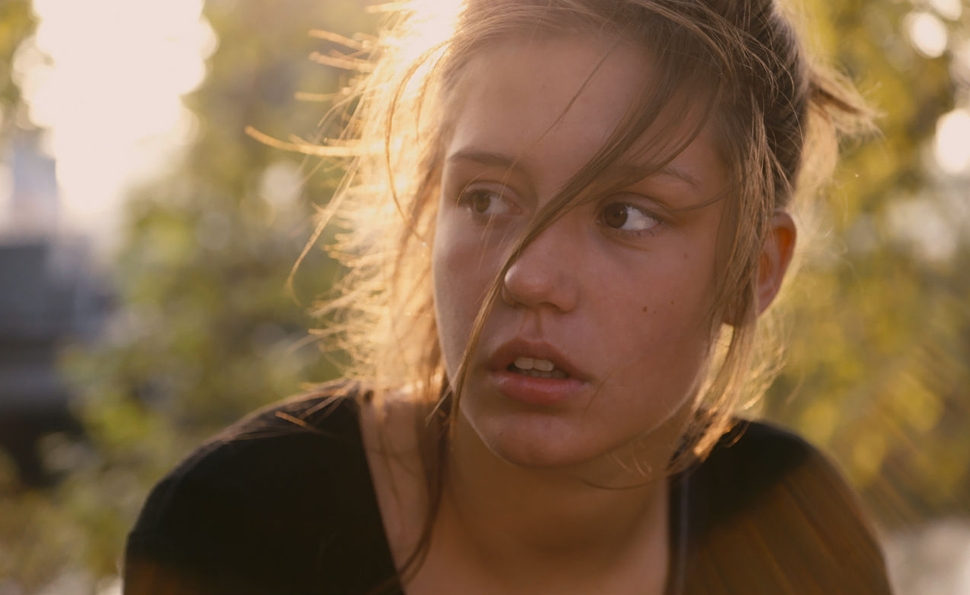 Blue Is The Warmest Color

Take away the particulars, and the relationship between Adèle (Adèle Exarchopoulos) and Emma (Léa Seydoux) in Blue Is The Warmest Color is coming-of-age by the numbers—a flame that burns brightly and singes, leaving the mark of experience. But at three hours, Abdellatif Kechiche’s electrifying drama makes the intimate epic, turning those particulars into the fullest possible imagining of a teenage girl’s life—not just the torrid affair at its center, but how she lives, where she works, her schooling and social class, and the ever-evolving passions that send her careening down a wayward path. It’s arthouse spectacle of the first order, shot across a widescreen canvas more associated with Lawrence Of Arabia’s trek through the African desert, and equally scaled in its emotional register. For the young, first love has an end-of-the-world intensity that’s both ecstatic and dangerously unchecked by the cautions of wisdom; here’s a film that does everything it can to catch that lightning in a bottle.

Introduced looking every bit the lump of moldable clay she is, with her baby-fat cheeks and oversized winter jacket, Adèle is a 15-year-old who loves books and is eyeing a career in education, but otherwise radiates uncertainty and vulnerability. Feeling pressure from her friends to start gaining some romantic experience, she indulges the affections of a classmate (Jérémie Laheurte), but losing her virginity doesn’t make the picture any clearer. When Adèle spies Emma in passing, with her wry smile and blue-streaked blonde hair, she’s thunderstruck—it may not qualify as love at first sight, but it certainly opens up a new set of possibilities. Adèle and Emma meet a second time when Adèle drifts into a lesbian bar, and the connection deepens, despite the hostility she gets from peers once word starts to circulate about her emerging sexual identity.

Adèle and Emma consummate their relationship via a vigorous, 10-minute lovemaking session that has completely dominated discussion of the film since it won the Palme D’Or last May. How people view this one sequence tends to color how they feel about the film overall, and not unfairly: Those who attack it as pornographic and heteronormative are likely to see the further adventures of Adèle and Emma as a prime example of the way movies are filtered through the male gaze. Those struck by its audacity are more willing to accept it as of a piece with Kechiche’s outsized vision of love, which is awash in a sensuality he doesn’t care to temper with discretion. And that sensuality can break in different directions, from the heights of uninhibited pleasure to the depths of betrayal and heartbreak. It’s part of Kechiche’s brilliant strategy that the two longest scenes in the film are like Newton’s third law applied to drama, with one action resulting in an equal and opposite reaction.

A French-Tunisian with a keen feel for cultures mingling and clashing, Kechiche has directed four other features, but only 2007’s The Secret Of The Grain, a superb ensemble piece about an immigrant’s dream of opening a portside restaurant, has been widely circulated in the States. His talent for the big setpiece was clear there, too: Just as no one can talk about Blue Is The Warmest Color without first mentioning the sex scene, Grain’s spectacular belly-dancing climax sucks all the oxygen out of the room. Yet in both cases, Kechiche paints them like emphatic brushstrokes on a much larger canvas—maybe these are the points where he wants to draw viewers’ eyes, but they arise from the context of family, social status, and his characters’ fuller journey.

Over the three-hour sprawl of Blue Is The Warmest Color—Grain is 151 minutes, suggesting Kechiche runs on a different clock than other filmmakers—Adèle and Emma experience the full arc of a relationship, and it’s a credit to Exarchopoulos and Seydoux’s committed performances that the high and lows of intimacy resonate so powerfully. Yet the fullness of their lives leaves a deeper impression than any individual scene, much as several of them are built to stand out. Kechiche wants the audience to know what Adèle is reading, how she interacts with Emma’s parents and friends (and vice versa), how her sexuality transforms her, and how she’s received in the culture at large. It’s emotionally and sexually explicit, as raw as an exposed nerve at times, but Adèle and Emma have public lives as well as private ones, and the film’s great achievement is holding them in balance and observing how they relate to each other. Even the most expensive space adventure isn’t bigger than this.