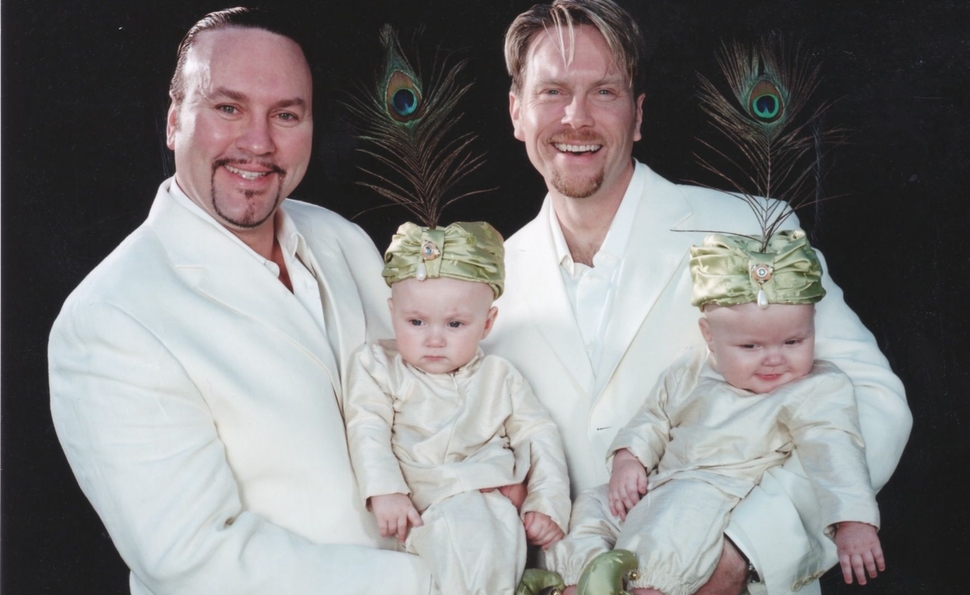 Two: The Story Of Roman & Nyro

Desmond Child, his husband, and their surrogate twin sons compose a happy, bright family. If there’s such a thing as a normal family, the Childs are it. But with the documentary Two: The Story Of Roman & Nyro, Child demonstrates that normal people generally make dull subjects.

Child, a 2008 Songwriters Hall of Fame inductee whose credits include most of Bon Jovi’s biggest hits and “Livin’ La Vida Loca,” co-produced and co-wrote Two with his husband, Curtis Shaw Child. The film skims over the early stages of their relationship to focus on their enlisting of a mutual friend to serve as a surrogate mother, before ending with the joy of being parents. Roman and Nyro were born in 2002, making them old enough to be charming on camera in wraparound segments, but too young to be anything else. Still, with their mops of blonde hair and ease in front of a crowd, they’re an engaging presence, as when they accept an award from the American Fertility Association by admitting they don’t know what “fertility” means.

It’s a strange world where some people consider raising a family to be activism, and the parents briefly allude to this. But if that is meant to be the film’s focus, it never quite gets there. What’s truly strange about Two is how halfheartedly director Heather Winters acknowledges anything that might have provided some nuance in the Childs’ lives. Desmond touches on the fact that he was the product of an affair, and remains close with his biological father, but offers no hint as to how this revelation affected him, or his decision to start a family. The surrogate, a free spirit named Angela Whittaker whom the Childs met on a Deepak Chopra spiritual retreat, enters the picture with little incident, and is never anything but completely dedicated to carrying the twins.

Winters has produced several documentaries, including the perfectly entertaining muckraker Super Size Me, but in her directorial debut, she seems clueless about how to frame her material. One overlong sequence after another chirps out the same note of event-planner sentimentality, as the twins’ birth leads to a New Age-y naming ceremony, followed immediately by Angela’s wedding. Too often, Two feels like a stranger’s camcorder footage that’s been edited on the fly.

The Childs are marketing their story without a hook. Where are the tales of adversity, or the moments of introspection? Why make political overtures, only to pull away from them? (California’s overturned Proposition 8 is alluded to, though not by name, and the family visits Washington, D.C. as tourists, to no consequence.) And why don’t they ever disagree on anything? No family is this happy all the time.

For comparison’s sake, it’s worth roping in another entertainer’s recent look at her own lineage: Sarah Polley’s magnificent Stories We Tell. Polley found where the movie inside her life was hiding, and drew out a gripping yarn through a combination of re-enactments, conceptual flourishes, and truly intimate confessions. The film is so much more than a Polley family history, owing to the strength of the teller as much as the tale. There is value in the story of a relatively drama-free nontraditional family like the Childs, but as a 10-minute short, where the impact would be all the greater for trimmed fat. Gay parents or not, 70 minutes of home movies is still 70 minutes of home movies.