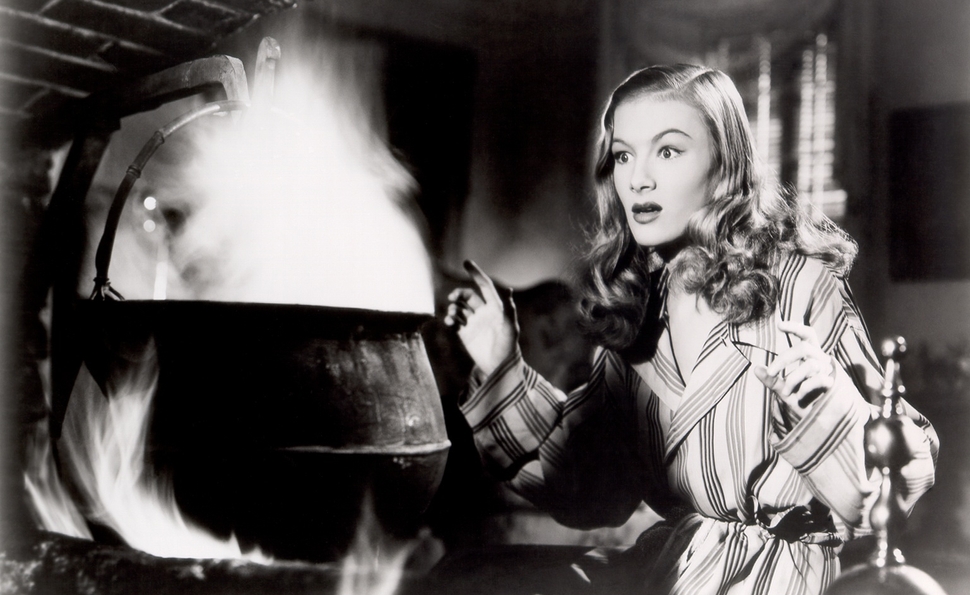 I Married A Witch

Like “funnyman,” the term “movie magic” is generally employed sarcastically, surrounded by imaginary air quotes. In its harshest light, the ironic use of “movie magic” casts doubt not just on the film being mocked, but on the notion that there’s anything magical about the often grubby, pandering business of moviemaking. But the term perfectly suits René Clair’s delightful 1942 fantasy romance I Married A Witch, and not just because the film deals with the supernatural, and features sublimely simple, elegant special effects. The movie benefits from a rare, potent alchemy of filmmakers, stars, and subject matter. It’s a lovely, breezy lark that captures star Veronica Lake at the height of her beauty, and French cinematic magician Rene Clair at the apex of his flirtation with American studio filmmaking.

Adapted from an unfinished novel by Topper creator Thorne Smith (upon his death, Norman H. Matson completed it), the film opens at a witch-burning in colonial Salem, with the spirits of warlock Daniel (Cecil Kellaway) and his witch daughter Jennifer (Veronica Lake) being imprisoned inside a tree at the behest of glowering Puritan patriarch Jonathan Wooley (Fredric March). In retribution, Jennifer lays down a curse on Wooley and all his descendants: They will forever be doomed to romantic failure, fated to marry shrews singularly devoted to their misery.

Then one fateful moment hundreds of years later, a bolt of lightning frees these malevolent spirits from their wooden prison. The liberated duo decide to enact further revenge on the latest luckless Wooley: Wallace (again played by March), a gubernatorial candidate whose default look of dyspeptic irritation betrays that Jennifer’s curse has continued to work its dark magic. In fact, his upcoming marriage to Estelle (Susan Hayward), the daughter of his primary political benefactor, is solely one of convenience. Jennifer decides to make Wallace fall in love with the witch who cursed his family, then watch him suffer once he realizes the impossibility of the situation. But like most schemes in romantic comedies, this one goes astray.

In one of the film’s loveliest, most lyrical conceits, the newly freed Jennifer and her father initially travel through the contemporary world as sentient clouds of smoke, before settling on bodies. Lake’s sensual purr of a voice establishes Jennifer as an irresistible erotic force before she’s even seen. Once she’s adopted tantalizing human form, Jennifer inserts herself into Wallace’s life with an assurance and conviction that could easily pass for insanity; she’s confident she can wear down his resistance through a combination of old-fashioned charm and witchcraft, given her power to control minds and the weather, and generally do whatever supernatural mischief the film requires of her at any given moment.

In I Married A Witch, love, hate, revenge, and romantic longing are all inextricably intertwined, which lends the film a twist of sadomasochistic kink. Jennifer’s plans to torture Wallace for his ancestor’s misdeeds look an awful lot like another man’s ultimate romantic fantasy. She seemingly wants to inflict the most pleasurable form of pain on her unlikely, unwilling soulmate. Lake and March reportedly despised each other offscreen, but that friction works spectacularly onscreen, as his character is moved by powers beyond his control. The character’s resistance and annoyance is real, palpable, and futile, and March makes for a terrific straight man, aided by Robert Benchley’s droll turn as his hard-drinking best friend.

As Guy Maddin notes in his lovely liner notes for the film, the logic of I Married A Witch is the abstract, playful, sometimes surrealistic logic of dreams, songs, and musicals, rather than the generally more concrete and linear logic of cinema. The film is powered by swooning romanticism, impish wit, teasing sexuality, and an underlying sophistication befitting a Preston Sturges production, though he went uncredited for his work here. But the film belongs to Lake, who is positively preternatural here. Her incandescent appeal, as much as the contributions of her brilliant collaborators, gives the film flight.

A surprisingly dry audio interview with Clair that doesn’t touch upon I Married A Witch, a more revealing interview with him in film’s booklet, and the eloquent Guy Maddin essay.