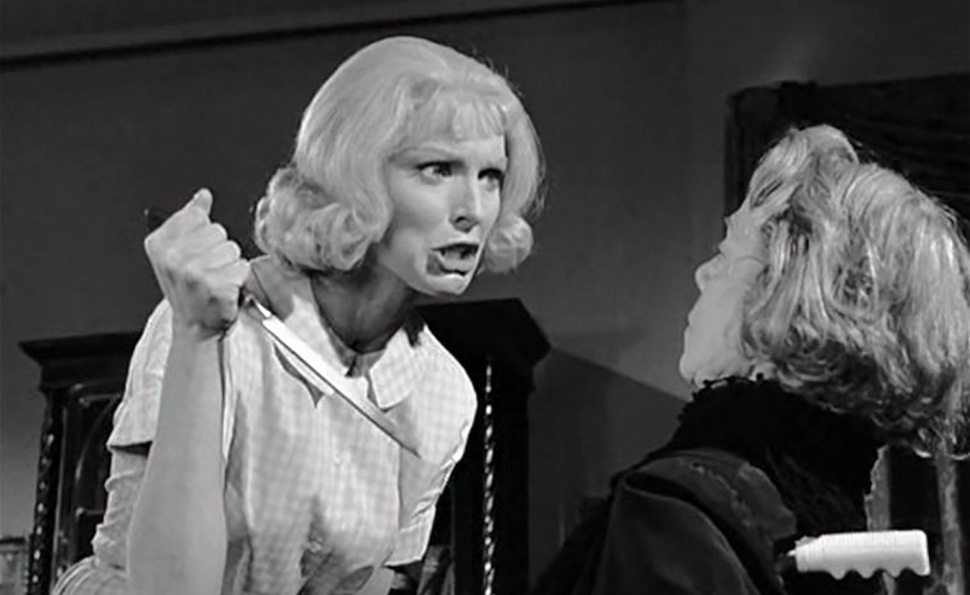 In the 1960s, lots of B-movie producers tried to draft off the success of Alfred Hitchcock’s Psycho by making films about perverted serial killers, but only producer-director-huckster William Castle had the chutzpah to interrupt his 1961 thriller Homicidal picture right before its climax for a “Fright Break,” offering a full refund to any audience member who wanted to leave the theater and stand in “The Coward’s Corner” in the lobby. Yet what’s really surprising about Homicidal is that even without that gimmick, it’s an enjoyably bizarre film, making some of the basic elements of Psycho even freakier. Consider the opening sequence: After Castle’s quirky, Alfred Hitchcock Presents-like personal intro, Homicidal follows a jittery blond woman as she checks into a creepy old hotel—which is very much like what happens at the start of Psycho. But then the story takes a turn, as the woman offers a bellhop $2,000 to marry her, and then rides with him out in the middle of the night to a justice of the peace, whom she stabs to death immediately after the ceremony. And all of this happens 80 minutes before the Fright Break.

Joan Marshall (using the pseudonym “Jean Arless”) plays the murderess, Emily, who lives in a big, spooky house with a mute, wheelchair-bound old woman and spends her days working on a complicated scheme to finagle an inheritance. The plan is impossible to explain without spoiling Homicidal’s big twist ending—and it isn’t that easy to explain even to people who’ve seen the movie—but it doesn’t matter much, because Emily’s battiness gums up her machinations. Castle redistributes the closing explanatory scene from Psycho throughout Homicidal, having cops and psychologists explain every few minutes how emotional repression can erupt into murderous rage. But anyone who watches Emily smash porcelain bride-and-groom figurines (after pressing them against each other suggestively) doesn’t need any experts pointing out that she’s pretty wiggy. Meanwhile, Castle accentuates the craziness by throwing in cross-dressing, sexual innuendo, and a surprising amount of gore for a movie that was originally released by Columbia Pictures. 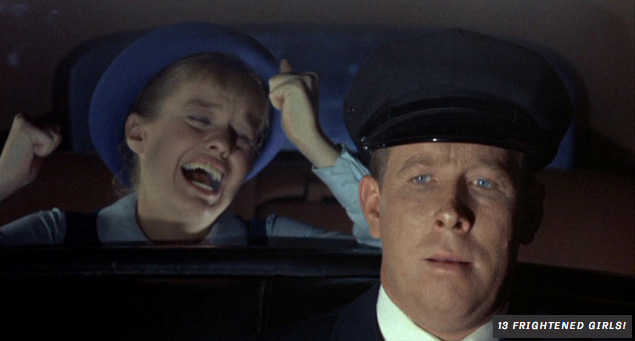 Castle was the master of the promotional gimmick, but not all of his tricks were created equal. For every Fright Break—or vibrating buzzer in theater seats, or life-insurance policies in case patrons were literally scared to death, or half a dozen other classic Castle curveballs—there were simpler promotions like the one accompanying 1963’s 13 Frightened Girls! Prior to filming, Castle held a contest to cast the most beautiful young women from around the world to play the residents of a Swiss boarding school for diplomats’ daughters. Then he built regional advertising campaigns around each of the actresses, even though there’s really only one star of the film: Kathy Dunn, playing Candy, a popular, can-do teenager who stumbles across a corpse while visiting a Chinese classmate during break, and soon begins educating herself in the ways of espionage, using her international connections to feed intel to the U.S. government under the codename “Kitten.”

Forget the horror-movie title, which was changed in some places to the more tonally apt The Candy Web. 13 Frightened Girls! is like a Disney version of a spy picture, completely devoid of anything objectionable, aside from some outdated notions of gender roles. It’s colorful, with some of the chipper overtones of juvenile fiction, and some of the despondent undertones of the Cold War era. (At one point, Candy’s unobtainable crush-object, an agent played by Murray Hamilton, laments, “The time between thinking about pushing the button and pushing it is seconds.”) Mostly, it’s sturdy. What gets forgotten in all the reminiscences about Castle’s shillery is that the man was a competent, crafty director, not some hapless hack. Without his gimmicks, Castle’s films probably would’ve been mostly forgotten, because they aren’t that good. But they’re good enough that fans can give thanks that those gimmicks existed, because they’ve kept his work alive in B-philes’ hearts and minds.

Rare for an MOD title, Homicidal includes a featurette called “Psychette” (ported over from an earlier DVD edition), which has film historians struggling to distinguish how this movie is an homage to Psycho, rather than a rip-off. The disc adds a vintage newsreel segment—more like an infomercial—covering the film’s Youngstown, Ohio première. The 13 Frightened Girls disc includes some of the alternate openings shot for different markets, which were originally intended to put the spotlight on each country’s designated actress, giving locals a reason to fill the auditorium.