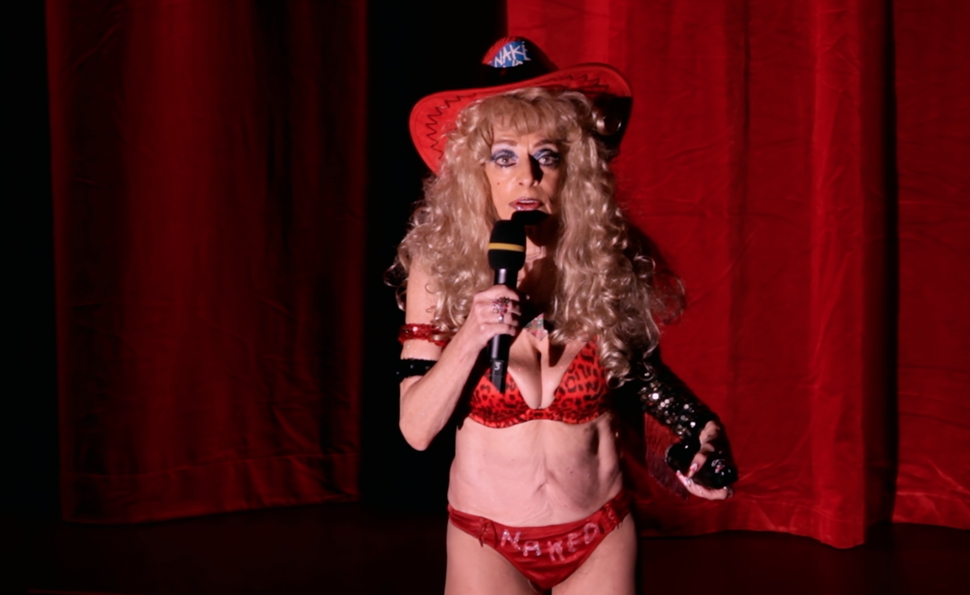 The quasi-concert film Peaches Does Herself is exactly what gender-bending electro-pop singer Peaches means it to be, for better or worse. As a musician, Peaches has always been raw by design, cutting punky, hip-hop-inflected songs that often repeat one or two raunchy phrases over a half-developed riff and a hard beat. The music is so simplistic because it’s mostly just a conveyance for Peaches’ attitude, her sense of humor, and the way she challenges conventional notions of sexuality. Peaches Does Herself shows her performing some of her best-known songs on a huge, prop-filled stage, supported by half-naked dancers and half-naked guest stars. The dancers can’t dance very well, and none of the musicians or guests play or sing impressively, but their amateurishness serves a purpose. This is Peaches telling the story of her life, same as she always has—unpolished, and off the cuff.

Will Peaches Does Herself hold any entertainment value for people who aren’t already Peaches fans? That’s a difficult question. Whatever Peaches’ intentions with this film, she makes some questionable choices as a director. Her biggest misstep is that she and her troupe seem to be performing in a vacuum. Aside from occasional cheers from the crowd (which could’ve been dubbed in later), there’s no indication that anyone is watching this show. Peaches Does Herself looks like a conventional concert film, with shots, camera moves, and edits that are more functional than expressive. The artistry is meant to be in the performance itself, but since the people onstage are fairly graceless, it would’ve helped to see Peaches’ fans get swept up in the whole experience—even if just for few seconds, to show someone being genuinely transported rather than fumbling along. (This is especially true during a long, tuneless performances of “I Love Dick” by burlesque performer Sandy Kane, The Naked Cowgirl, whose shtick falls flat when no one is reacting to it.)

But every time Peaches Does Herself seems to be falling into an inescapable rut of sneering and shock, Peaches comes up with with an image that deepens the whole endeavor. One of Peaches’ best tricks is how she appropriates and subverts the big arena moves of Madonna and Katy Perry, giving them a DIY spin. With Peaches Does Herself, she peels away the pretense of those blockbuster productions, and reveals her vulnerabilities, whether she’s vomiting blood after taking a (fake) hard fall onstage or showing herself getting gender-reassignment surgery.

The most beautiful moment in the whole film comes at the end of “Shake Your Dix,” when after prancing around in a full-body suit sporting prosthetic breasts and a huge erect penis, Peaches sees the fully nude transsexual Danni Daniels, and the song’s phony provocations give way to the heartfelt ballad “I Feel Cream.” There aren’t enough of those genuinely awe-inspiring sequences in Peaches Does Herself, but when they do come, they redeem the duller stretches, and lend meaning to the triumphant moment at the end when Peaches walks out of the theater, singing “Fuck The Pain Away” with more purpose and subtext than she ever has before.