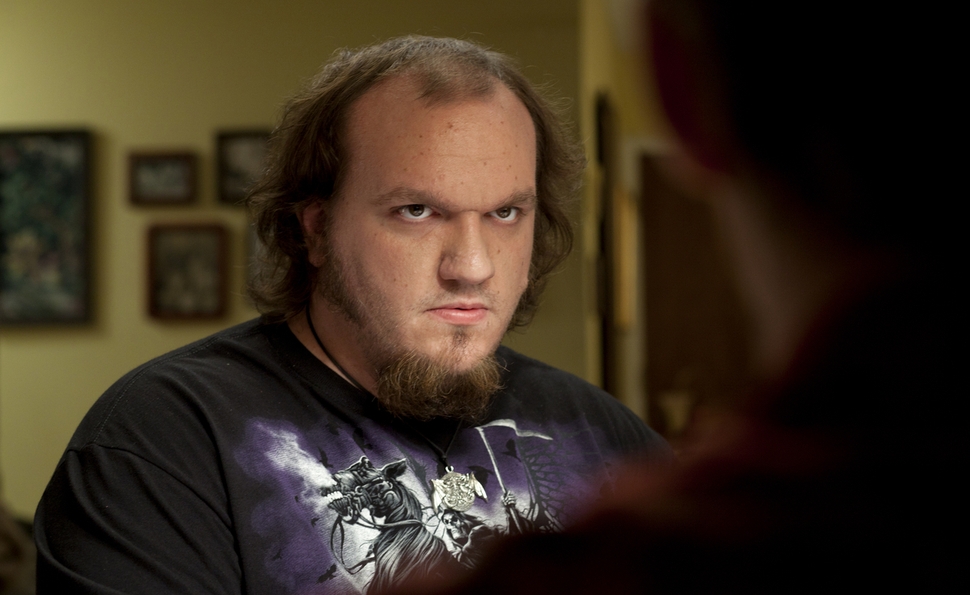 Though Revenge Of The Nerds couldn’t be classified as a Spartacus moment, somewhere between the release of that film and today, enough people started self-identifying as “nerds” that the term has lost all meaning. While the pocket protectors and snorting laughs of 1980s nerd-dom are a different strain of inauthentic, it’s rare for movies then or now to offer up the real deal—unkempt, socially inept, narrow in obsessions, and a little insecure and mean about it. No one would self-identify as the geek Sam Eidson plays in Zero Charisma, a rage-filled game master who compensates for his lack of power and respect in real life by ruling his RPG fiefdom with an iron fist. He isn’t a lovable outcast; he’s an outcast because people don’t want to spend any time with him.

Writer/co-director Andrew Matthews and his directing partner, Katie Graham, have an almost jock-like relentlessness in exposing the shortcomings of Eidson’s Scott Weidemeyer, an overweight twentysomething who lives with his grandmother, works as a delivery boy for a combination donut/taco “palace,” and treats any perceived slight with the defensiveness of a drunk porcupine. Scott registers a full 10 on the Todd Solondz scale, and it’s a strength and weakness of the film that it identifies geek misanthropy so specifically, yet can’t resist piling on the humiliations. Zero Charisma is a comedy by classification, but its cruelties have a way of turning it into a psychodrama inadvertently. The tone is often as abrasive as its hero.

First shown stocking up on food supplies for gaming night—off-brand potato chips, circus peanuts, and the other pitiful geeks of the snack aisle—Scott leads four friends of comparable nerdiness through the latest phase of a three-year adventure. The game is Dungeons & Dragons, but he’s modified it enough to accommodate his homemade characters and realms, and bent the rules to increase his control. When one of his buddies suddenly opts out for personal reasons, Scott scrambles for a replacement and finds one in Miles (Garrett Graham), an easygoing hipster who brings beer and fun to the table. Sensing a threat to his authority, Scott tries to turn his old buddies against Miles, but as the title implies, he doesn’t have the charisma points, and no roll of the 20-sided die is going to make a difference.

Graham and Matthews align their sympathies with Scott, but they challenge those sympathies at every turn, often to a fault. The circumstances of Scott’s life are deeply sad, as revealed when the mother who abandoned him turns up after his grandmother suffers a stroke, but many of his psychic injuries are self-inflicted. From that childlike place of neediness and insecurity, there’s also anger and aggression that spills out without a trace of self-awareness; contrast that with Miles, the secret villain of the film, who is extremely self-aware but consequently inauthentic, a poseur intruding on Scott’s sincere land of make-believe. Zero Charisma suggests that Scott may be ugly and unpleasant, but at least he’s keeping it real.

Eventually, though, the embarrassments dealt to Scott become too much to take, playing almost sadistically on his habit of throwing himself in the middle of awkward social situations. Graham and Matthews score a few mordant laughs from his fury—when he moves a poster in his room to cover a hole he punched in the wall, it reveals a previous hole that needed postering over—but the discomfort mostly overwhelms the comedy. Time and again, he barges his way into the center of scenes, whether asserting The Matrix as a ripoff of his unpublished short story, or confronting a table-top gaming master at an in-store Q&A. Time and again, it’s excruciating to witness. After a while, it seems sensible to opt out of the game, too.