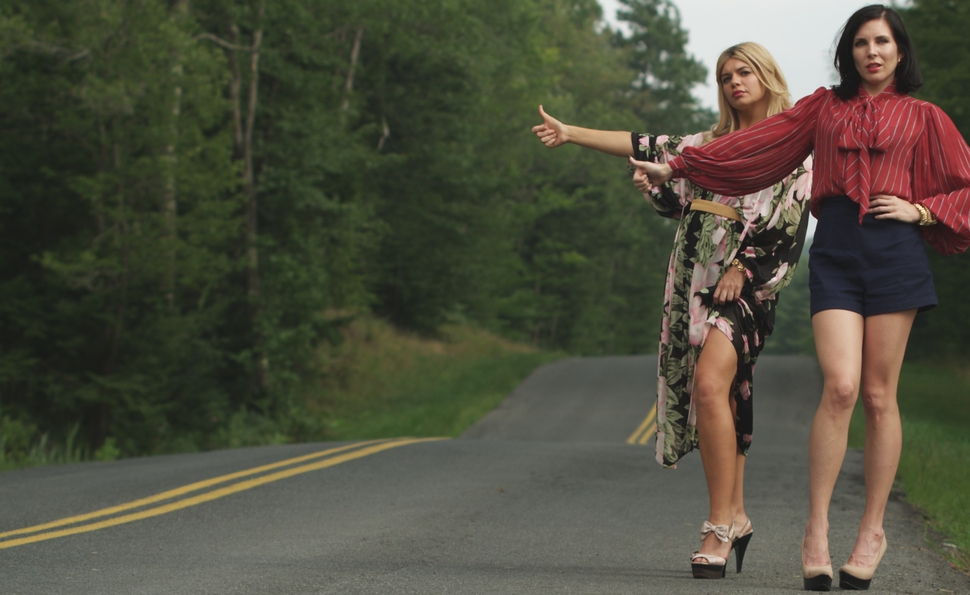 Ass Backwards wastes no time in getting to the asses. Twin streams of liquid seen flowing down an incline in the opening shot are revealed to be urine, as the camera pans up to find best friends Kate (June Diane Raphael) and Chloe (Casey Wilson) squatting on the street with their pants at their ankles, letting it fly. (Or trickle, rather.) They do so again twice more before this nearly mirth-free comedy is over, for no apparent reason other than the writer-actors’ desire to be perceived as edgy taboo-busters. Raphael and Wilson have worked together since college, performing sketches with the Upright Citizens Brigade and making short films for Funny Or Die; they have a certain staccato chemistry when bouncing lines off each other, but their mutual idea of what’s funny, as writers, aims squarely for the lowest common denominator. “From the women who crafted, if that’s the word, the screenplay for Bride Wars!” the ads for Ass Backwards do not proudly announce, lest people run screaming in the opposite direction.

Apparently unsure whether to go with the lazy idea of a disastrous beauty pageant or the equally lazy idea of a zany road trip, Raphael and Wilson lazily combine the two. (Just like Little Miss Sunshine!) Kate and Chloe are oblivious losers who inhabit a bubble of mutual reassurance: Kate pretends Chloe’s job as a go-go dancer is just the first step toward her dream of being a world-famous singer, while Chloe supports Kate’s pathetic efforts at entrepreneurship, which involve her attempting to sell her eggs to infertile couples via Craigslist. The two originally met as little girls at a beauty pageant, which they both decisively lost; invited to compete in a reunion pageant (to be judged by a former winner and rival, played in a cameo by Alicia Silverstone), they decide this is their chance to redeem themselves in the world’s eyes. Kate, however, programs the wrong information into their van’s GPS, so they wind up taking several extra days to get there, experiencing various inane adventures along the way.

According to the Kickstarter campaign Raphael and Wilson launched to raise completion funds (they successfully met their $50,000 goal), Ass Backwards was inspired by a road trip they took themselves, which they characterize as “misguided and misdirected.” Odds are, however, that it didn’t involve a stop at Camp Sister Solstice (“Womyn only”; the big joke in this sequence is that Kate and Chloe try to repay a favor by jointly crawling into bed with a presumed lesbian as she sleeps), or a jail stint alongside the star (Brian Geraghty) of a reality-TV show about drug addicts in rehab.

When they finally do get to the pageant, Chloe mangles the lyrics to “The Greatest Love Of All” and Kate responds to a question about feminism by admitting complete ignorance. That’s the best Raphael and Wilson can do for a big finish, along with some wanton destruction and Jon Cryer playing it broadly queen-y as the stage manager. (As the emcee, Bob Odenkirk gets the movie’s only funny line, delivered as a contestant walks onstage carrying a saxophone: “Let’s welcome Ms. Jennifer Fagano with a rendition of ‘We Didn't Start The Fire’.”) When in doubt, the ladies just pull their pants down again and shove their butts at the camera. Comedy can be fueled by desperation, but the characters are the ones who should be flailing wildly, not the writer-stars.