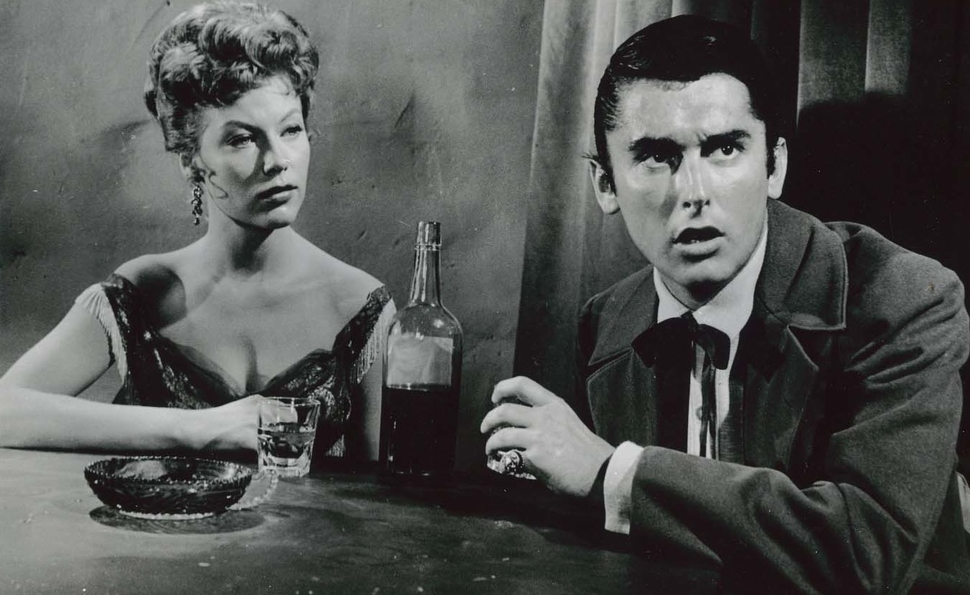 The Fiend Who Walked The West

The 1958 Western The Fiend Who Walked The West plays a central role in the mythology of actor-turned-producer-turned-author-turned-national treasure Robert Evans: It’s the movie that killed his once-promising acting career. In Evans’ recounting, the film undid the work he put into becoming a proper movie star in the tonier likes of the star-studded Hemingway adaptation The Sun Also Rises and The Man Of A Thousand Faces, the Lon Chaney Sr. biopic in which he portrayed famed studio head Irving Thalberg (at the personal behest of Thalberg’s widow, Norma Shearer, he will have you know). Evans was on a rocket ride straight to the top before The Fiend Who Walked The West sent him spiraling toward producing films and running his own studio.

Evans has never claimed he’s a great actor, a rare bit of humility in a lifetime fueled by hubris and delusional self-aggrandizement. But he also attributes the film’s failure to the way it was packaged, beginning with a title more befitting a lurid paperback novel or a Z-grade, zero-budget independent cheapie than a studio-produced remake of the classic noir Kiss Of Death. Fox’s manufacture-on-demand service, Cinema Archives, faithfully re-creates the film’s grotesquely misguided publicity campaign, with a DVD box of the movie poster showing an inexplicably green-skinned, unrecognizable Evans leering obscenely down at the film’s other actors—all of whom are a fraction the size of his head—with a look of crazed malice on his face. His eyes are bugged out, his chin weak, his lips curled into a sneer. Evans looks more like the Incredible Hulk than the famously handsome, charismatic man who married (and divorced) Ali McGraw and romanced countless lovelies of the silver screen during his heyday. “He breaks a neck and laughs… watch out for yours!!” screams a tagline above Evans’ inexplicably disembodied floating head. A second, tackier tagline promises, “The kooky killer is on the loose! Don’t dare turn your back on him!!” (The film’s trailer, the only special feature included on the DVD, lays it on even thicker. It opens with Evans lurking through a studio mist like Lon Chaney Jr. in The Wolf Man. He mugs and twitches while a narrator warns of a “beast with a baby face” who is also also “the most diabolical horror that ever roamed the earth,” a fiend promising “a new kind of thrill and chill experience.”)

Evans inclines toward embellishing the truth for the sake of a better, more dramatic story, but in this case, reality needs no embellishment. 20th Century Fox really did take a film that, in vastly different circumstances, could have been Evans’ big dramatic breakthrough, and package it as the kind of lurid garbage no one in their right mind would want to see. Sure enough, the film has been largely ignored through the ages, and is now of interest primarily to rubberneckers morbidly fascinated by Evans.

Evans isn’t blameless, though. In a star-destroying performance, he plays Felix Griffin, a crazy-eyed Wild West lunatic fortuitous enough to meet Daniel Hardy (Hugh O’Brian) in prison and learn all about the bank robbery that landed Hardy there. Out of jail, Griffin sets about terrorizing his ex-cellmate’s loved ones in a bid to uncover the location of the money stolen in the robbery. There’s a reason Evans’ performance is the film’s sole claim to fame: His scenery-devouring turn sucks in everything else onscreen. He’s so fascinatingly, preposterously over-the-top in his villainy that the whole cast has no choice but to react to him. Evans plays Griffin as a proto Charles Manson, a babbling, oppressive lunatic who calls Hardy “sad man” and is seemingly more concerned with freaking out squares than discerning the location of the lost money. He’s more beatnik than Western outlaw, a wannabe James Dean in a jarringly inappropriate context.

His luxurious locks pulled back into a greasy pompadour, his sonorous voice pushed into a nasal whine, the spastic, childlike Griffin sometimes suggests Jerry Lewis re-imagined as a deranged psychopath. The Fiend Who Walked The West let Evans escape the handcuffs of pretty-boy roles and remake himself as an intense character actor, an Actors Studio, Method type. He didn’t rise to the challenge, and the film craters under the weight of his astonishingly misguided work. Evans stops just short of frothing at the mouth and shrieking to convey his character’s insanity. Perhaps he understood that he couldn’t beat Richard Widmark (whose version of the character in Kiss Of Death was a career-defining, Oscar-nominated performance) on the basis of quality, so he set out to outdo him with quantity. Evans does a lot of acting here, all of it bad.

To be fair to Fox, the studio treated The Fiend Who Walked The West like lurid garbage in part because it didn’t know how to market a tricky, difficult-to-categorize Western remake of a classic noir, starring a relative unknown. And also because it is lurid garbage. Fiend is as bad as its title, advertising, and reputation, and that’s setting the bar awfully low. The film answers the question, “Was Evans really that bad an actor?” affirmatively, though sometimes entertainingly. He eventually found the role of a lifetime in playing himself, or at least a larger-than-life variation of himself, in his wonderful autobiography The Kid Stays In The Picture and its audiobook and documentary adaptation. In raconteur-memoirist mode, Evans is still ridiculously over-the-top and ensconced in self-parody (a ham actor through and through), but now the role fits him more snugly.

GoWatchIt: Buy. Rent. Stream The Fiend Who Walked The West