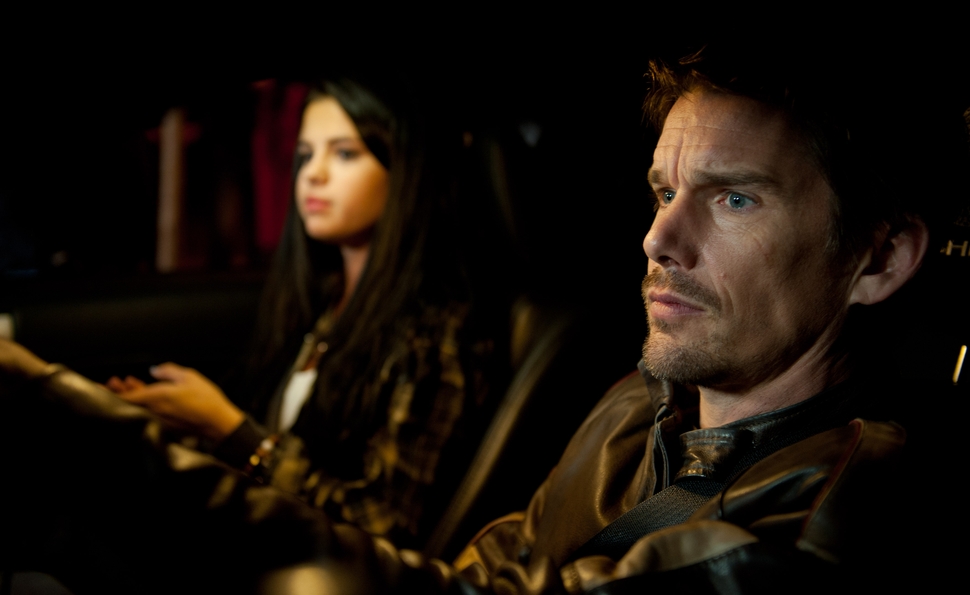 It seems logical to conclude that Getaway has no definite article to avoid any association with Sam Peckinpah’s 1972 action classic The Getaway, but based on the evidence here, the filmmakers probably just found the extra word boring and cumbersome. Going pedal-to-the-metal on a gearhead movie like this one isn’t the worst impulse for a genre director, but unmodulated speed is another form of cruise control. The film never hits beats other than go-go-go, and the overall experience is unrelenting and oppressive, a cacophony of revving engines, twisted steel, and shattered glass, all jumbled together from a battery of digital cameras and manipulated color stocks. (Or whatever the non-film equivalent of “stock” happens to be.) It couldn’t be a simpler, more workable premise for a good B-movie, but the amount of effort put into making it fast and edgy is inversely proportional to the scant thrills it yields.

Ethan Hawke, who’s been doing good work lately in grimier fare like Daybreakers and Sinister, acquits himself well again as Brent Magna, a former race-car racer who crashed and burned his way out of a promising career. Brent gets an involuntary shot at redemption when his wife is kidnapped and a Jigsaw-like puppetmaster called The Voice (Jon Voight, mostly as a whiskered upper lip) orders him behind the wheel of a stolen Shelby Cobra Mustang. With The Voice threatening to kill his wife if he fails to hit certain high-speed benchmarks without getting nabbed by the police, Brent steers through car chase after car chase through the streets and parks of Sofia, Bulgaria. When the Mustang’s unnamed rich-girl owner, played by Selena Gomez, tries to commandeer her own car in a parking lot, she’s forced to go along for the ride, too.

The tiny digital cameras mounted all over the car—Abbas Kiarostami has to answer for that one—make Getaway feel like a relic of late-1990s/early-2000s video productions, when the technology was muddy and limited, and the best filmmakers could do was play around with it a little. The cameras are there ostensibly so the bad guy can monitor his pawns’ every move, but director Courtney Solomon (An American Haunting, Dungeons & Dragons) uses all of them and many more, trading coherence for intensity. The action sequences are virtually indistinguishable: The Voice gives the orders; Brent screams through heavy pedestrian traffic and totals a massive fleet of cop cars and motorcycles; his wife lives another 15 minutes. When Solomon opts to stop cutting like Jason Voorhees and sticks with one long, sustained shot from the front of the car, Getaway gains immeasurably in excitement, because viewers finally get the vicarious jolt of sitting behind the wheel.

Doing her best Kristy Swanson in The Chase, Gomez does the requisite pouting and whining about how much her character hates Brent for taking her along for the ride—even though she’s aware he has to follow orders or his wife will be killed. Screenwriters Sean Finegan and Gregg Maxwell Parker want her to have an arc, from resentful brat to selfless ally, so they keep pretending she doesn’t know his predicament. And when it comes time to get out of the predicament, she just happens to have an iPad in the dashboard, and the hacking skills to access servers and satellites. This catch-as-catch-can slapdashery becomes the film’s prevailing aesthetic, and it tries to compensate for it with relentless forward movement. But sometimes, speed kills.