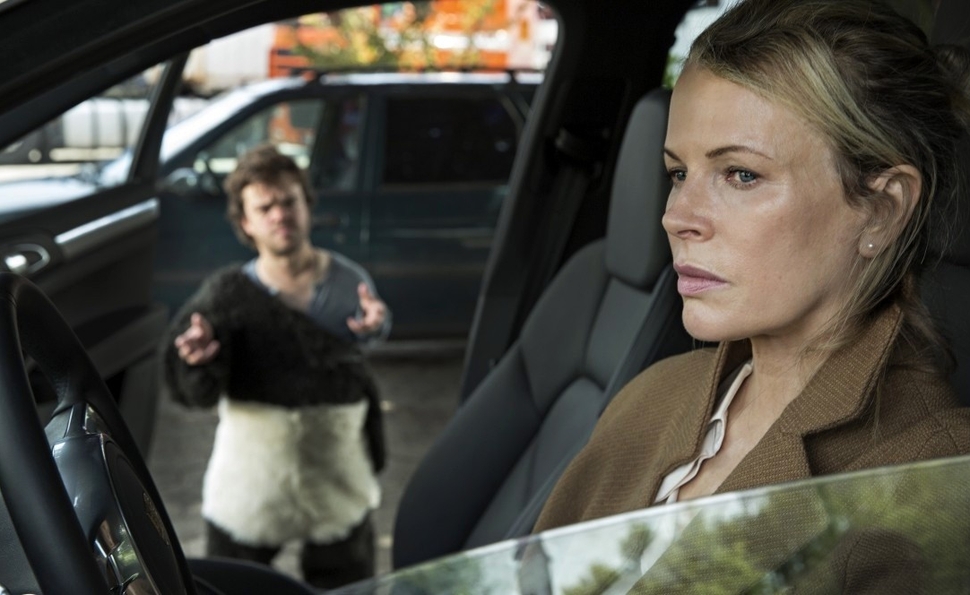 At 61, most former Hollywood sex symbols have resigned themselves to making the transition from district attorney to Driving Miss Daisy. (That depressingly accurate précis of a Hollywood actress’ trajectory, spoken by Goldie Hawn, is The First Wives Club’s sole contribution to American culture.) Kim Basinger, however, isn’t ready to surrender just yet. It warms the heart, even as it chills the blood, to see her commit unreservedly to the lead role in a movie as warped as The 11th Hour, ready to go wherever button-pushing Danish filmmaker Anders Morgenthaler wants to take her. Morgenthaler was one of the contributors to the omnibus horror film The ABCs Of Death (he did “K”), and his 2006 animated feature Princess, about a man’s quest to destroy all evidence of the porn movies in which his late sister had starred, reportedly makes Ralph Bakshi look like Walt Disney. He’s not the kind of director an Oscar-winner usually seeks out, but Basinger was apparently content with the knowledge that even if The 11th Hour didn’t turn out to be a good movie—and it didn’t—it would at the very least be a memorable one.

Impending obsolescence is its subject, in a sense. Maria (Basinger), despite her advancing age, desperately wants to have a child, and has been trying without success for a decade, suffering numerous miscarriages. When the latest failed pregnancy nearly kills her, she reluctantly agrees to heed her doctor’s warning and give up, but still wants to adopt. Her husband (Sebastian Schipper), however, declares himself no longer interested in child-rearing, moving into a hotel when Maria won’t take no for an answer. “Fortunately,” Maria works as the managing director for a German shipping company, and has just been asked to reroute traffic near the Czech-Slovak border, as the uptick in commerce there has led to an increase in child prostitution. Hearing that some of these teenagers have infants who may themselves wind up forced into sex work, Maria decides to drive to the region and either purchase or, failing that, kidnap a baby. She’s not sure she can do it alone, though, so along the way she finds a French-Canadian junkie dwarf named Petit (Jordan Prentice)—who’s first seen wearing a full-body panda costume, because “French-Canadian junkie dwarf” isn’t striking enough—and offers him 10,000 Euros to help her. (How, exactly, is unclear.)

Right from the outset, The 11th Hour (which played Fantastic Fest last year as I Am Here, a better title) suggests that Maria is bonkers. Morgenthaler favors heavy abstraction—the film’s first lines of dialogue are barely audible through the amniotic fluid in which her doomed fetus is suspended—and Basinger plays the role with a manic intensity that makes the husband’s decision to bail seem justifiable. What’s more, Maria repeatedly hears a little girl’s whispering voice (“Come find me, mommy”), or feels a tiny pair of arms hug her from behind. This figure, which initially appears (just before the near-fatal miscarriage) as a fairy-sized girl engulfed in blinding light, seems to be a collective representation of all the potential children Maria has lost, as well as a clear indication that she’s gone off the deep end. Petit’s function in the story, on the other hand, is hard to discern. Is it supposed to be irrelevant that he’s a dwarf? (Unlikely, since the film’s working title was Petit.) Is he, too, meant to represent a child, symbolically, by virtue of his small stature? That would be ludicrous, but the likely alternative—“Hey, a dwarf would make this crazy tale even crazier!”—would have Peter Dinklage’s character from Living In Oblivion throwing another fit.

Ultimately, The 11th Hour doesn’t succeed in being much more than the sum of its eccentricities, which eventually include Peter Stormare as a Russian thug who takes horrific revenge on Maria and Petit after they steal a hooker's newborn infant. Both of the main characters are tissue-thin—Maria is defined entirely by her all-consuming desire for a child, while Petit is such a junkie cliché that he actually keeps saying “Never trust a junkie” out loud, at one point while talking to himself—and the film has nothing cogent to say about maternal anguish or postpartum depression. All the same, it’s bracing to see Basinger take on something this dark, even if the darkness is empty. The film’s ending, in particular, plays like a glib variation on the disturbing finale of Catherine Breillat’s Fat Girl, with the presence of a Hollywood celebrity (as opposed to Breillat’s unknown non-professional) providing a semi-subversive gut punch. Basinger may not have picked a winner this time, but at least she’s not settling for comfy irrelevance.