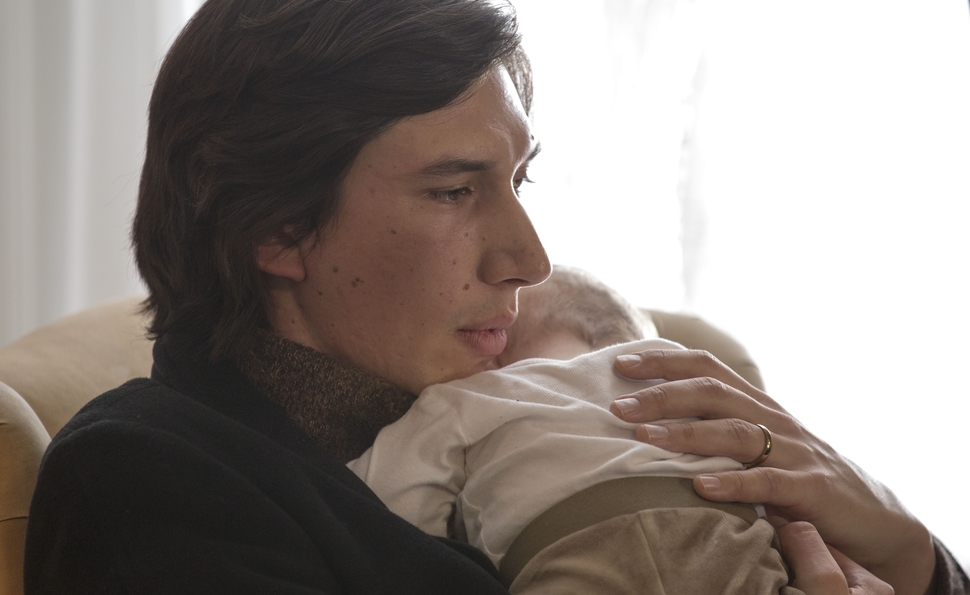 In a refreshing change of pace, Hungry Hearts introduces its central couple, Jude (Adam Driver) and Mina (Alba Rohrwacher), via an initial encounter that isn’t so much a meet-cute as a meet-gross. The two strangers are locked together in a restaurant men’s room after Mina, who didn’t see the signs, opens the wrong door. Then the door sticks, which might lead to some cuteness, if not for the fact that Jude has apparently just taken the most noxious dump in human history. Both of them are nearly overpowered by the odor, increasing their desperation to free themselves; unfortunately, neither one can remember the name of the restaurant in order to phone for help. Were Hungry Hearts a romantic comedy, it’d be getting off to a memorably offbeat start. Instead, this comic scene foreshadows a toxically claustrophobic relationship in which Jude and Mina’s infant child will become the primary victim.

The story moves quickly, impatiently, in leaps and bounds. One scene after the restroom meeting, Jude and Mina are sharing a bed; one scene after that, Mina is consulting a home pregnancy test. The baby is born via Caesarean, against Mina’s wishes, and spends its first few days in an incubator, but is otherwise healthy. Mina, however, had consulted a psychic, who informed her that she was carrying an “indigo child”—New Age gobbledygook claiming certain kids represent the next stage of human evolution, and possess supernatural abilities. (This concept was not invented for the movie, sadly.) For some reason, this turns Mina into a psychotically overprotective mother, obsessed with purification. She refuses to let her baby out of the apartment—especially not to see a doctor—and feeds him a strict vegan diet. Jude soon determines that the baby is malnourished and in serious danger, but he doesn’t want to upset Mina, so he spends a lot of time sneaking the kid out of the house so he can surreptitiously feed him meat.

Already, Hungry Hearts doesn’t make a whole lot of sense, which may be a cross-cultural issue. Technically, the film is an Italian production, adapted from an Italian novel (Marco Franzoso’s Il Bambino Indaco, or The Indigo Child) by an Italian director, Saverio Costanzo (Private). Rohrwacher is Italian, too. But Mina and Jude live in the U.S. (she was working at the Italian embassy when they met), and the situation presented here wouldn’t be tolerated for a minute. Jude, who’s properly alarmed, is shown as having no recourse whatsoever, when in reality, Child Protective Services would intervene almost instantly. There can’t be a doctor in the country who would inform a father that his baby is dangerously malnourished, learn that the mother refuses to feed the child properly, and not contact the authorities. Instead, legal counsel advises Jude to kidnap the child (really!), and Child Protective Services winds up arriving to take the baby away from him, delivering the poor thing into the arms of the clearly deranged mother who’s slowly killing him. It’s a slow-motion horror movie founded on utter nonsense.

Some rather torturous phrasing in that last paragraph (“the poor thing,” etc.) is necessitated by the fact that Jude and Mina’s baby is never referred to by name over the course of the entire movie—they both just call him “my/our son.” That lack of specificity extends to their entire lives, which are bizarrely devoid of any element that doesn’t directly relate to the narrative. Jude goes to work, but his profession is never revealed, and he appears to have not a single friend in the world, apart from his mother, Anne (Roberta Maxwell), who’s needed for the ludicrous finale. Consequently, Driver and Rohrwacher (who won Best Actor and Actress at last year’s Venice Film Festival for these performances) are both forced to project constant intensity into a contextual vacuum. Mina, in particular, and despite Rohrwacher’s best efforts, is just a flat-out loon, which Costanzo attempts to convey visually by shooting many of Hungry Hearts’ later domestic scenes through an extreme fisheye lens—an effect that’s more goofy than disorienting. The film would have been more interesting, and far more credible, had it made at least a token attempt to empathize with Mina’s concerns. Surely there are vegan parents who don’t want to feed their children meat, and find ways to accomplish this that don’t put the kids’ lives at risk? Try Googling the topic, Jude!