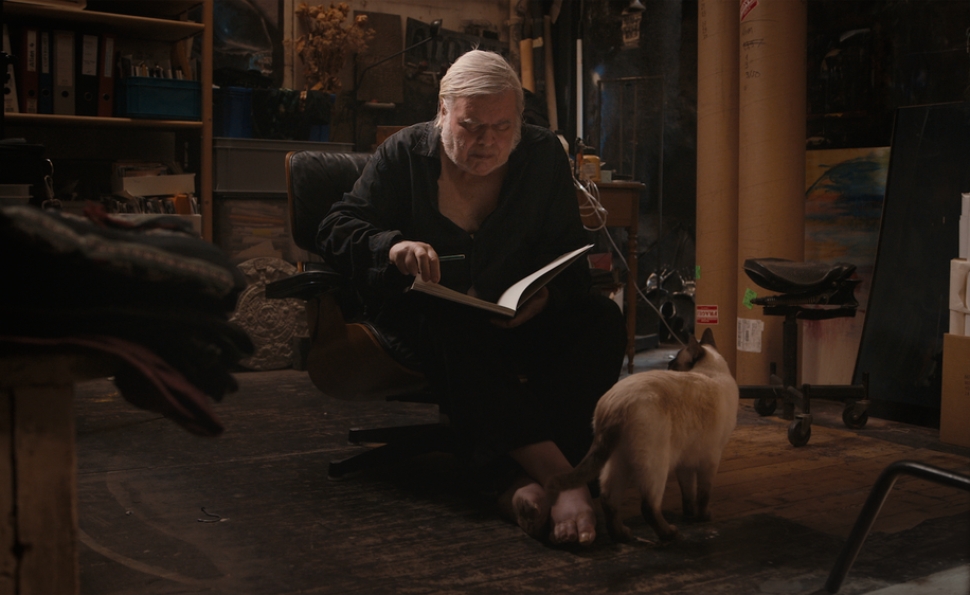 Dark Star: H.R. Giger’s World, a documentary about the Swiss surrealist made shortly before his 2014 death, opens with footage of an inconspicuous Swiss home surrounded by trees. It seems like a pleasant place, and Belinda Sallin’s decision to set her footage to ambient nature sounds does nothing to change that impression. Then ominous music kicks in as the camera draws closer to a door opened by an unseen hand. There are monsters on the other side, unsettling beasts that combine the features of humans, animals, and machines. There’s also a great deal of clutter, unwashed dishes, and a friendly cat named Müggi. It’s all presided over by the home’s owner, the fleshy, hirsute, gentle-mannered, semi-mobile Giger, who’s first seen sitting in a dark room sketching some kind of tube that could belong to a mechanical device or some kind of biological organ. He’s a man in his element.

Mostly, Sallin’s film is happy to observe Giger being Giger. Often, it’s a bit too happy. Content to let his work speak for itself, Giger has little to add to the conversation, and while it’s intriguing to see him working in—or sometimes just ambling through—a house filled with his work and sources of inspiration, Sallin too often lets these scenes crowd out the story she’s trying to tell. The film touches on Giger’s origins in the underground art world of 1960s Zurich, but never provides much sense of what that world was like, apart from some flashes of archival footage. It also brings in key chapters from Giger’s life, like a relationship with actress and muse Li Tobler that ended with Tobler’s 1975 suicide. It’s eerie to see the face that inspired so much of Giger’s work from the period, but when Tobler’s brother alludes to her mental state being the product of her puritanical upbringing and the debauchery of Giger’s circle, and the film doesn’t elaborate on that observation, it feels like Sallin is missing the story.

That’s also true of a scene in which Carmen Maria Giger, the artist’s wife and assistant, alludes to some unhappy dealings with 20th Century Fox, the studio behind Alien, home to Giger’s most famous creation. Though Sallin brings in some behind-the-scenes footage of Giger at work on the film that shows how hands-on he was in working with the film’s effects, Dark Star doesn’t elaborate much on the experience, or its apparently unhappy fallout.

Sallin seems to be working under the assumption that anyone drawn to the film already knows the basics of Giger’s life and work, and the film often seems to be designed more as a commentary on his career than a document of it. As such, it’s only sporadically compelling. Like Giger’s work, the interviewees keep hitting the same themes, pointing out that his work forces us to confront the dark side and the sometimes disquieting ways life, death, and sexuality all get tangled together. They aren’t wrong, though, and even if the leisurely paced film often seems like a missed opportunity—couldn’t the time devoted to the Gigers walking in the front door after returning home from a trip have been put to better use?—it does showcase Giger’s continuing power to upset and transport. Former Celtic Frost singer Thomas Gabriel Fischer, who also worked as Giger’s assistant, credits him as a musical inspiration, and with providing Fischer with the means to work through his childhood trauma. In one late scene, a tattooed fan breaks down in tears upon meeting his hero. Giger has little to add to the conversation beyond observations like, “I just liked the way it looks. It works well,” but that only deepens the mystery of how one man’s peculiar, nightmarish visions could creep into the lives of so many around the world.