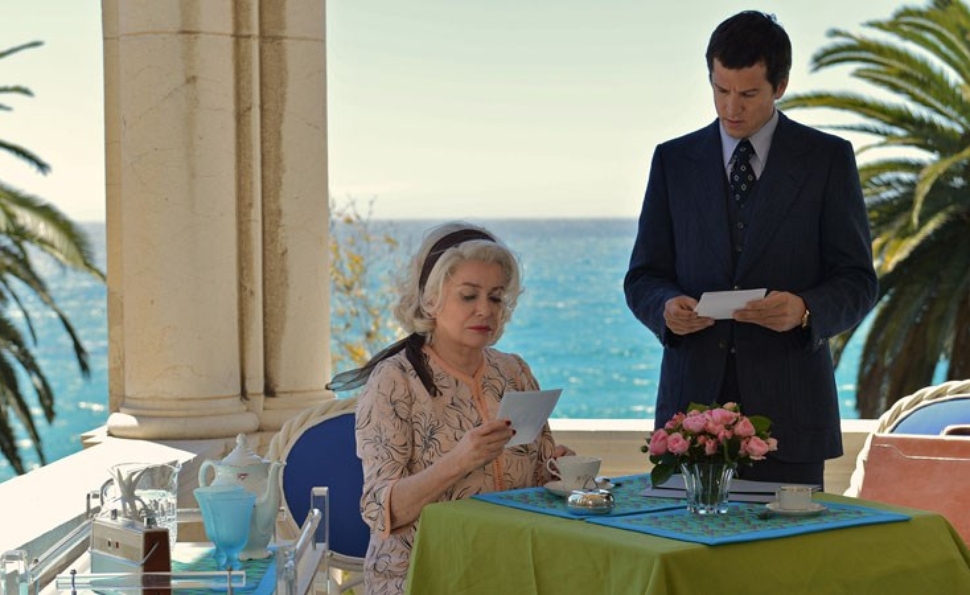 In The Name Of My Daughter

A few years ago, French filmmaker André Téchiné (Wild Reeds) made a movie, The Girl On The Train, that was superb in every respect save one: It was based on a true story. Rather than use the real-life incident (a young woman who falsely claimed she’d been the victim of an anti-Semitic attack on a commuter train) as the loose inspiration for a work of fiction, Téchiné doggedly stuck to the facts, whether or not those facts were dramatically compelling. Consequently, the movie, which is masterfully directed and gratifyingly complex, runs out of gas right when it ought to be revving up, stranding two great actors (Émilie Dequenne and Catherine Deneuve) in a scenario that crosses the line from ambiguous into inconclusive.

Téchiné’s new film, In The Name Of My Daughter, suffers from exactly the same problem—which is immensely frustrating, because it’s likewise terrific right up until it’s forced to address what actually happened (or, in this case, what didn’t happen). Set primarily in the late 1970s, it explores the circumstances leading up to the mysterious disappearance of a casino heiress, Agnès Le Roux (Adèle Haenel), who was widely suspected to have been murdered by her lover, Maurice Agnelet (Guillaume Canet). But it doesn’t play like a true-crime saga, and anyone watching it with no foreknowledge of its subject will be blindsided when it suddenly leaps forward several decades to the elderly Agnelet’s trial, especially since the case was still ongoing at the time the movie wrapped. (It finally concluded last year, just a few weeks before In The Name Of My Daughter had its world premiere at Cannes; closing text fills in the blanks.)

The parent implied by the film’s title is Renée La Roux (played by Deneuve, in her seventh collaboration with Téchiné since 1981), who ran what was then France’s second-largest casino, the Palais De La Méditerranée in Nice. Beset with financial difficulties—including a massive table-game loss quite likely engineered by rival casino mogul Dominique Fratoni (Jean Corso)—Renée refuses to give her adult daughter, Agnès, her share of the inheritance left by her father. Agnès still has a seat on the board of directors, however, and when she falls in love with Agnelet, who had been Renée’s attorney and advisor, things get ugly. Agnelet had felt humiliated when Renée hired someone else as her new casino manager, and he persuades Agnès to make a deal with Fratoni, accepting the amount of her inheritance in exchange for a vote against her mother at the next board meeting. This allows the new president to hire Fratoni as a consultant and take his self-serving recommendation that the casino be closed and liquidated.

Not a lot about murder in the synopsis so far, alert readers will have noticed. Agnès doesn’t disappear until the movie is nearly over; it’s mostly concerned with the so-called “casino wars” taking place at the time, with Agnès’ betrayal, and with the unhealthily one-sided relationship between its lovers. Haenel (Water Lilies, House Of Pleasures) isn’t yet well known outside of France (though she was just cast as the lead in the Dardenne brothers’ next film, so that’s about to change), but her mercurial performance here is a marvel, equal parts fire and kindling. Canet (who’s also a director: Tell No One, Blood Ties) plays Agnelet as a cold, subtle manipulator whose seduction method mostly involves truthfully characterizing himself as bad news. Watching this snake get involved with a woman as strong yet needy as Agnès, ultimately turning her against her own mother, is plenty engrossing all by its lonesome, though Téchiné suggests impending violence by repeatedly cutting on frenetic action. In the most memorable instance, Agnelet watches Agnès dance in a shot through which he can barely be seen through her flailing hair.

Then, just as things are coming to a boil, Agnès vanishes. The motive for the crime had been established: She split her payoff from Fratoni (3 million francs, which today would be about $2.3 million) with Agnelet, placing the money in two bank accounts to which each of them had total access. Agnelet took the cash, which he had every legal right to do. He also had an apparently rock-solid alibi. Nothing really happened until 2006, nearly 30 years later, so Téchiné tosses a bunch of newspaper headlines onscreen and then jumps ahead to Agnelet’s first trial, at which he was acquitted. (Apparently the prosecution can appeal in France, so that wasn’t the end of the matter.) This requires slathering both Canet and Deneuve in bad old-age makeup, since Deneuve is 71 but has to look 84. Worse than that, it requires abandoning everything that had made the film interesting, reducing it to an unremarkable, very belated whodunnit. These characters are so richly drawn, and inhabit such a precise milieu, that they deserved a less perfunctory, anticlimactic fate. The truth will allegedly set us free, but it often puts filmmakers in chains.

GoWatchIt: Buy. Rent. Stream In The Name Of My Daughter