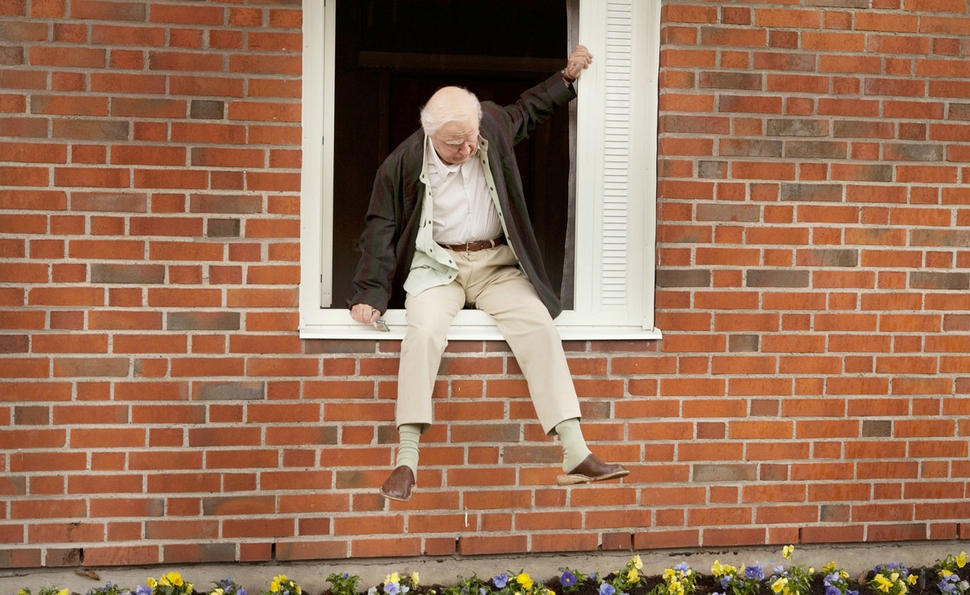 Destined to join Your Vice Is A Locked Room And Only I Have the Key and The Englishman Who Went Up A Hill But Came Down A Mountain in cinema-trivia purgatory, Felix Herngren’s new comedy The 100-Year-Old Man Who Climbed Out The Window And Disappeared has a good deal more to offer than its mouth-filling title. Surely, it must: The film played like gangbusters in its native Sweden, pulling in record-setting first-week audiences. For a hint as to the film’s surprising mass appeal, Herngren’s quirky comic odyssey shares a basic premise (and a few flaws endemic to that premise) with Forrest Gump, another unlikely mega-smash. A winningly off-kilter sense of humor, however, will protect 100-Year-Old from some of the anti-middlebrow-backlash that tarnished the legacy of Robert Zemeckis’ picture.

A man does a lot of living in the span of a century, so Herngren devotes a hefty portion of screen time to a highlight reel of the eponymous centenarian’s long, eventful life. Allan Karlsson (Robert Gustafsson) fostered an obsession with explosions from his early boyhood that led him through some of the defining cultural moments of the 20th century. Jumping from flashback to flashback, Herngren shows Allan inventing the atomic bomb, indirectly causing Stalin’s death, and having drinks with everybody from Harry Truman to Ronald Reagan. (Both of whom, in a nicely satirical rib-elbowing, come off as good ol’ boys with unchecked aggressive streaks.) Franco, Einstein, and other men identifiable from surnames alone make also make cameos as Allan stumbles from one pivotal event to the next, unwittingly shaping the face of history. Here lies the same trouble that plagued a super-speedy Tom Hanks in 1994: Herngren’s re-stagings of iconic snapshots quickly grow tiresome; they depict familiar faces, but rarely do anything of interest with them. 100-Year-Old sometimes feels like a rote biopic of a famous figure who never was, congratulating viewers on whatever recognition has rolled over from grade-school history class, then moving on to what comes next.

Herngren and Gustafsson truly shine in the film’s frame story. Instead of leaving his hero to natter at strangers on a park bench, Herngren lines up a cracking caper for Allan as he looks back on his triumphs and foibles. The film begins exactly as the title predicts: On his hundredth birthday, Allan stages an escape from the lifeless care facility where he was remanded after blowing up a fox in his yard. He heads for the nearest bus terminal, where a mix-up leaves him with a plastic suitcase full of drug money and a group of hardened bikers who’d very much like it back. During the ensuing chase, Allan crosses paths with a circus elephant, an amnesiac enforcer, and a host of other colorful characters.

The pursuit’s various twists and turns trigger Proustian memories for Allan, each packaged with a bespoke nugget of wisdom. Some of these ring with the hollowness of fortune cookies—at one point, Allan concludes, “Making grand plans is easy when you’re locked up or in a jam. But it does no good. Because life is what it is, and does what it does.” Later, he arrives at the pseudo-epiphany, “one thing always leads to another. But if that other thing is better than the first, you can never know in advance.” Fortunately, the split lands about 50/50, with certifiable pearls balancing out the duds. If there’s to be one lasting takeaway from 100-Year-Old, it’s Allan’s offhand observation made while hitchhiking: “The middle of nowhere is underrated.”

The bulk of the film’s comedy resides in Allan’s geriatric hijinks, coming from somewhat unusual points of origin. Herngren mines a surprising number of laughs from the complications of translation in a film that jumps language barriers with such frequency. After Allan gets off a phone call that ends with a man threatening him as “dead fucking meat,” Allan shrugs and simply informs his companion, “He told me I was meat.” There’s also a welcome sense of morbidity to a lot of Herngren’s humor. Abrupt deaths form the punchlines to many of the film’s unexpectedly dark jokes; in an early flashback, Li’l Allan accidentally and adorably murders a village merchant while toying with homemade explosives. Tight editing and nimble camerawork bring out the absurdity in the randomness of death in Herngren’s universe.

That willingness to dabble in gallows humor and inventive profanity lends this film a bit more personality than Zemeckis’ crowd-pleaser, mostly overshadowing the foundational flaws in the premise. This 100-Year-Old Man may wear dentures, but he’s still got teeth twice as sharp as Forrest Gump’s.

GoWatchIt: Buy. Rent. Stream The 100-Year-Old Man Who Climbed Out The Window And Disappeared