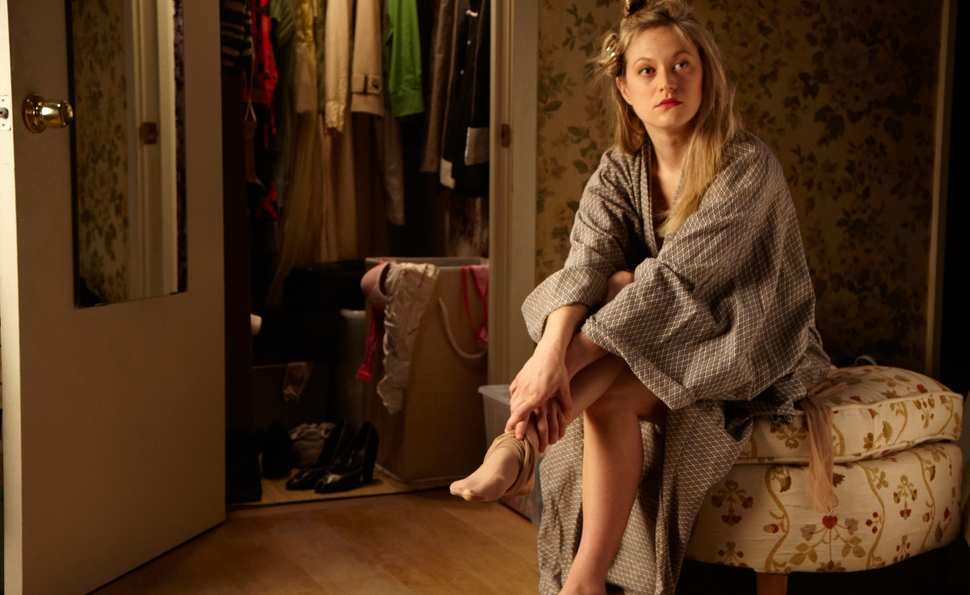 An agoraphobe and a plumber find unlikely love in Sparrows Dance, a mannered, occasionally mesmerizing romance that frequently cops to its own artificiality. Noah Buschel’s small-scale indie is, with a couple of key exceptions, set exclusively in the apartment of Marin Ireland’s nameless ex-actress, who for the film’s first 30 minutes, is depicted going about her mostly silent daily routine: checking her computer, sitting on the toilet, exercising on her treadmill, smoking cigarettes while wearing a hoodie in her darkened kitchen, and eating delivered Chinese food in front of the TV. Ireland’s hermit exudes palpable anxiety in her every carefully executed move, which also include a weird head-shaking tic that quietly speaks to the neuroses that compel her to cocoon herself in her claustrophobic one-bedroom residence.

The woman’s sheltered existence is thrown for a loop when her toilet overflows, flooding the place and forcing her to bring in a plumber, after vainly attempting to have someone walk her through repair procedures over the phone. The plumber turns out to be Wes (Boardwalk Empire’s Paul Sparks), a talkative guy with a beard and dark-rimmed glasses that give him the air of a stereotypical Brooklyn bohemian. Wes’ self-deprecating sense of humor and reserved physicality make his chattiness endearing. Though the woman initially rebuffs his request for a date, she soon relents—but only once Wes has physically moved out of Buschel’s static frame so he’s seen in a mirror, a directorial choice that evocatively reflects how Ireland’s protagonist feels compelled to initially keep this stranger at a distance as a means of self-defense.

Such aesthetics are typical of Sparrows Dance, which employs stationary cinematography that attunes itself to the troubled interior circumstances of its characters. Whether it’s from-the-ceiling images of Wes and the woman engaged in postcoital pillow talk, or conversational sequences marked by camera setups directly in front of the two budding paramours, Buschel’s direction usually expresses feeling in a direct, largely self-conscious manner. (One exception: the soundtrack, with its intrusive guitar plucking.) That’s most true of the film’s centerpiece, in which Buschel films Ireland and Sparks dancing from a distance that makes it clear that the apartment is merely an artificially lit set on a soundstage. Then, she slowly zooms into the arm-in-arm figures until they kiss in tender close-up.

That scene epitomizes the way Sparrows Dance calls attention to its staged nature, then actively transcends it to locate true, piercing emotion. Thus, when the director segues from medium shots to close-ups during Ireland and Sparks’ initial dinner together, the device comes across as both obvious and apt. Mostly, however, the film thrives thanks to its superb lead performances, with Sparks exuding an endearingly off-kilter earnestness that nicely contrasts with Ireland’s internalized phobic fears and self-doubt. Her issues come to the fore when Sparks tries to convince Ireland to attend his gig playing saxophone at a club, but they’re ultimately confronted in a mature finale that offers nothing more than reserved hope.