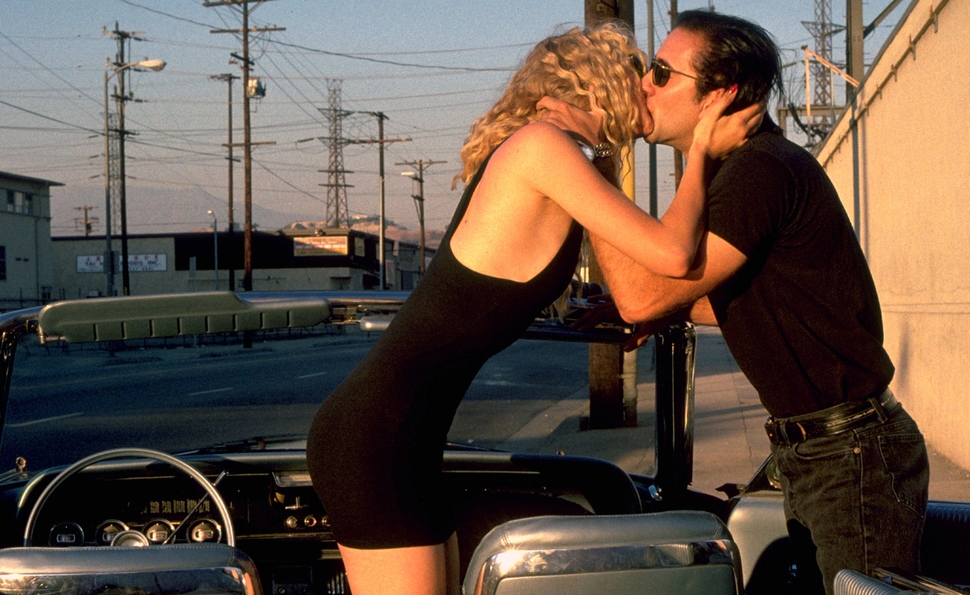 It’s tempting to treat David Lynch’s Wild At Heart as adding to the long tradition of unruly road pictures about the American landscape, but it’s too abstracted from the real place to belong to any tradition but Lynch’s filmography. Though far from an intellectual exercise, the film fiddles consciously with big cultural archetypes—Elvis, Marilyn Monroe, and The Wizard Of Oz, among others—and with capital-letter depictions of Good and Evil. Yet there’s a spontaneous, anything-can-happen feeling to it that’s the primary appeal of any road movie. Wild At Heart isn’t so loose-limbed that it seems “discovered” in the process of making it; as usual, Lynch wields too much control over the film to let that happen. But the wide-open format of a road movie gives Lynch’s imagination room to roam—maybe too much room, in certain instances—and the dark forces that close around its romantic heroes make it feel like a convertible gunned deeper into an encroaching nightmare.

Adapted from Barry Gifford’s slim novel, the film has an erotic charge owed partly to the us-against-the-world quality of two lovers on the run, and partly to the rough-and-tender chemistry between its stars, Nicolas Cage and Laura Dern. Though Sailor (Cage) and Lula (Dern) are throwback types tucked firmly within Lynch’s quotation marks—Cage playing Elvis as a self-styled rebel, Dern as a Monroe blonde who’s “hotter than Georgia asphalt”—the spark between them is instantaneous, and reinforced throughout by sex scenes (and post-coital chats) that are both vigorous and sweet. But Lulu’s deranged Southern belle of a mother Marietta (Diane Ladd) not only wants to keep them apart, but wants Sailor dead over an incident from her past that he witnessed. Marietta initially sends the meek but persistent Johnnie Farragut (Harry Dean Stanton) on their trail, but she also puts in a call to the vicious Marcelles Santos (J.E. Freeman), who in turn unleashes a terrifying assortment of lowlifes and assassins on Sailor and Lula. And still another creep, the menacing Bobby Peru (Willem Dafoe), steps in when they’re hiding out in the foul city of Big Tuna, Texas.

Four years after Blue Velvet, Lynch essentially taps into the same story of two innocents (including Dern in both) navigating a world of unimaginable depravity and evil, but without the containment of a tightly plotted modern noir. That makes Wild At Heart absolutely thrilling to watch, because dramatic tonal shifts can happen within the space of a few seconds and because little detours can be sprung at any time—the story of Lula’s Christmas-loving relative “Jingle Dell” (Crispin Glover), a roadside accident that glimpses into the last moments of a person’s life; a thrashing club band that slips into a capable Elvis cover at Sailor’s request. There’s a variety of looks and textures in the film, and soundtrack alone is proof of its eclecticism: A particularly gorgeous, romantic Angelo Badalamenti score; vintage singles like “Be-Bop A Lula” and “Baby Please Don’t Go”; the heavy metal of Powermad’s “Slaughterhouse” and the gentle, country-tinged guitar riff of Chris Isaak’s hit “Wicked Game.”

The biggest problem with Wild At Heart is that it isn’t always as liberated as it seems, especially in Lynch’s decision to saddle the entire film with a Wizard Of Oz allegory that occasionally connects, but more often seems like a square peg jammed into a round hole. Having visual cues like Marietta as a crystal-ball-wielding Wicked Witch Of The West is one thing, but Lynch clogging up the dialogue with Sailor talking about Jingle Dell needing some advice from the Wizard, or Big Tuna being “not exactly the Emerald City” is a little much even before Laura Palmer turns up as the Glinda The Good Witch. Road movies don’t have to follow the yellow brick road—that’s central to their appeal. They can wander.

Besides, Wild At Heart has a rich heart-of-darkness quality without The Wizard Of Oz providing the signposts. It might seem too much to replace Frank Booth and his goons from Blue Velvet with the gallery of vicious underworld characters pursuing Sailor and Lula here, but Freeman, Dafoe, Grace Zabriskie, and Isabella Rossellini all leave unforgettable impressions and assert a seemingly insurmountable obstacle for love to overcome—and blissfully transcend. However people might feel about Wild At Heart—and plenty at Cannes, where it won the Palme D’Or, and in multiplexes, where it baffled many, didn’t feel great about it—it can’t be said that Sailor and Lula don’t earn their union.

The KL Studio Classics edition, out on both DVD and Blu-ray, ports over the features from previous DVD editions, including an amusingly superfluous few minutes of Lynch explaining the DVD transfer process. The same series of interviews—with Lynch, Dern, Cage, producer Steve Golin, and cinematographer Frederick Elmes, among others—are assembled and disassembled for several interview and behind-the-scenes featurettes, which all tell an informative story about the film’s production that’s still light on juicy details.