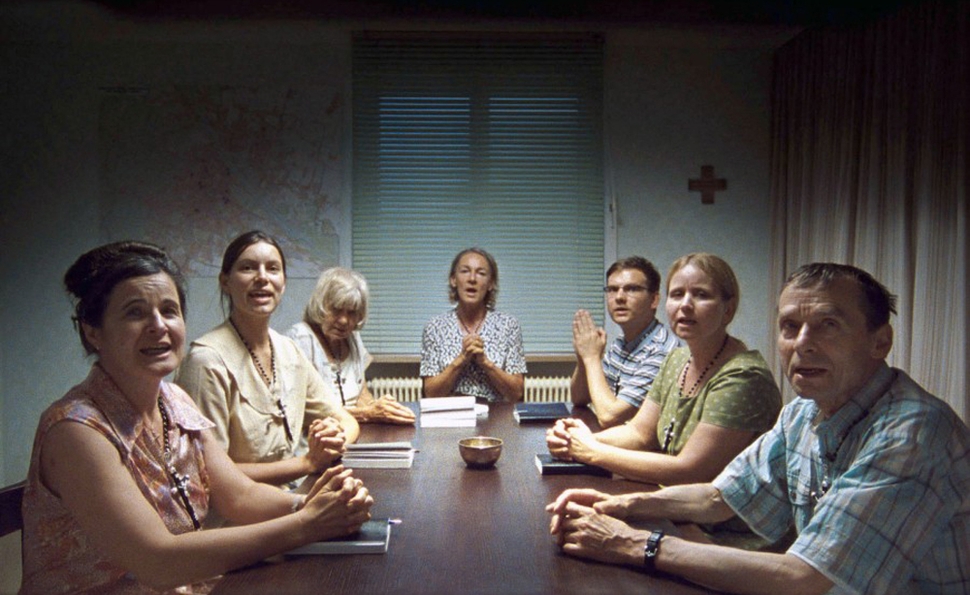 When the films of Austrian director Ulrich Seidl are good, they’re stark; when they’re bad, they’re blunt. In all cases, whether making documentary or fiction films, his approach doesn’t change: He explores the extremes of human behavior with a formal discipline that can seem either clear-eyed or reductive. Consider a typical shot from Paradise: Love, the first in a trilogy of loosely interconnected films about women on holiday. (Though viewers should know that “paradise” is to Seidl as “happiness” is to Todd Solondz, a state more imagined than realized.) Following a lonely, obese 50-year-old Austrian woman who visits Kenya as a sex tourist, Seidl emphasizes a literal border between the tanning slabs of white Europeans at a resort and the desperately poor black locals on the other side of the rope, eager to sell their wares—and their bodies, if necessary. As a vision of exploitation, it’s almost insultingly simple, but Seidl deepens it with a story that respects the human neediness of his heroine (a brilliant Margarete Tiesel) and the complex motives of the Kenyan men who take part in the transaction.

Now consider an early scene from Paradise: Faith, the second in the trilogy. Seidl again follows a lonely, middle-aged Austrian woman on vacation, but instead of flying off to some exotic locale like her sister in Paradise: Love, Anna Maria (Maria Hofstätter) devotes herself to door-to-door missionary work. At home, her prayer room consists of a desk against one wall and a giant crucifix mounted on the wall across it. As part of her ascetic ritual, she unlocks a desk drawer and pulls out a cat-’o-nine-tails, takes off her dress and bra, gets down on her knees before the cross, and vigorously self-flagellates, asking the Lord to forgive her transgressions—which the audience can only assume are extremely impure thoughts. Again, Seidl could not be clearer in his associations between religion and sex, but in Paradise: Faith, he’s slightly less successful in mining them for greater insights. It’s constantly skirting that line between stark and blunt.

If it ultimately falls on the right side of the line, that’s owed largely to Hofstätter’s wrenching performance as a woman who genuinely wants to purify a life that’s tarnished beyond repair. A medical technician by trade, Anna Maria takes time off to serve a mission to convert Austrians to Catholicism. Hauling around a foot-tall statue of the Virgin Mary, she encounters the occasional flat-dweller willing to pray with her, but more often meets slammed doors, insults, and more complicated challenges to her directives. Her plans are derailed, however, when her Muslim husband Nabil (Nabil Saleh), a wheelchair-bound paraplegic, turns up in her apartment after a years-long absence, and wants their marriage to resume. Anna Maria finds Nabil unctuous enough that she can fend off his requests to sleep in her bed, but her religious beliefs leave her duty-bound to serve him in other ways. 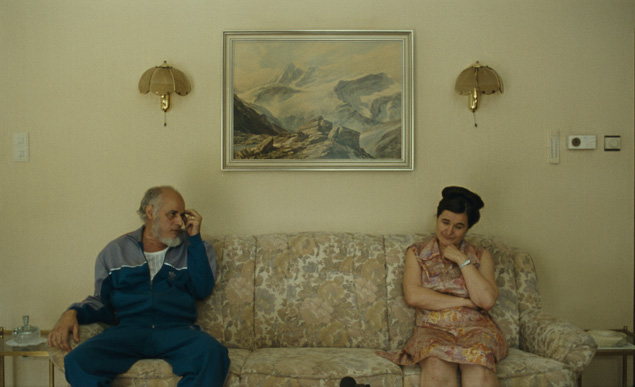 Offering a paraplegic Muslim as Anna Maria’s long-long husband is a typical Seidl ploy, and he seems to know it—the mischievous grin Nabil offers when Anna Maria first finds him on the couch makes the audience feel like it’s part of a sick practical joke. Paradise: Faith fails to go much deeper into that relationship, however, instead folding it into Anna Maria’s larger struggle to keep the faith and overcome the immense obstacles God has placed on the path to righteousness. The film has more success in scenes where Anna Maria squares off against non-believers, like one comically absurd argument in which she tries to convince an aging couple that they’re “living in sin” by spending their golden years together, or a harrowing sequence where she pleads with a raging drunk to put down a liquor bottle—and the knife she’s using to open it.

As part of a trilogy, Paradise: Faith just barely connects to Paradise: Love—Anna Maria has to cat-sit for her (unseen) sister who’s overseas, but only viewers who have seen the first film will realize the association. Still, there are meaningful rhymes between two sad, middle-aged women who “vacation” on the edge. Seidl has a cold, methodical touch that in neither case forbids his protagonists from attracting sympathy for trying to change their lives, however much it humiliates them or makes them seem pathetic. Paradise: Faith has a disappointing neatness to its conclusion that’s intended as a provocative callback to the cat-o’-nine-tails scenes in the beginning. But Seidl does better when he isn’t trying to provoke at all—when Anna Maria’s quest is framed not as some grand, kinky delusion, but as a genuine attempt at spiritual fulfillment. In those moments, Hofstätter brings the film back down to earth.