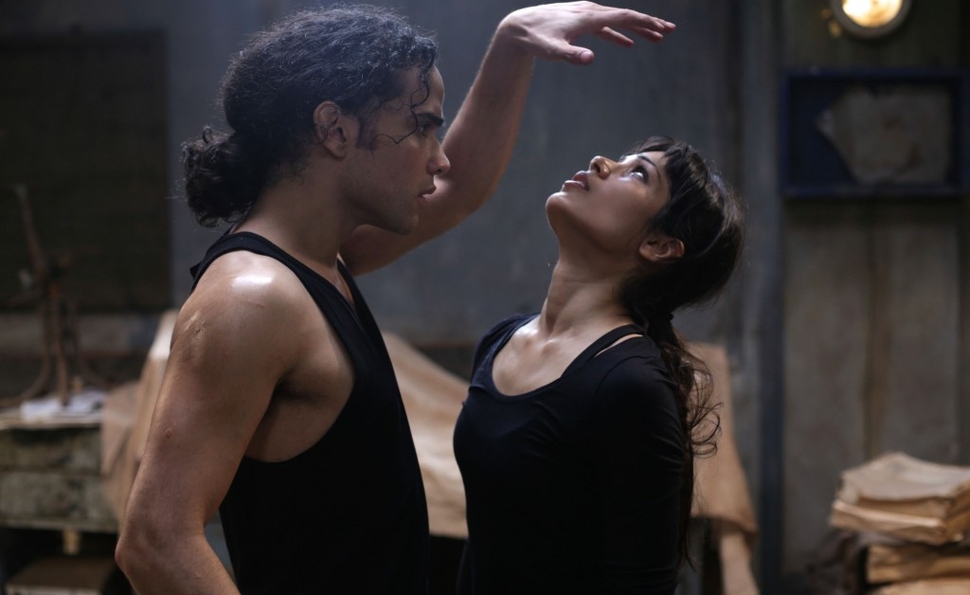 The somberly crowd-pleasing Iranian drama Desert Dancer offers a unique take on that old cinematic stand-by—most recently embodied by the deathless Step Up series, but with roots dating back to the musicals of the 1930s—in which a motley crew of street dancers risk it all for a dream. The first twist in Desert Dancer is that the motley crew of dancers most assuredly are not of the street variety, because in the theocracy-ruled Iran of the film, dancing is forbidden. So anyone dancing in the streets, David Bowie and Mick Jagger style, would risk being arrested.

The second big distinction is that in Desert Dancer, “risking it all for a dream” isn’t just a hokey, meaningless, and over-abused Hollywood cliché. The stakes here really are life or death. Being discovered by the ruling regime could result in imprisonment, torture, or worse. In that respect, the film resembles an Iranian version of Footloose, another morality tale about a world where dancing is forbidden, albeit with the tacky ebullience of the original and the lurid eroticism of the remake replaced by a dour sincerity befitting a fact-based film that’s as much about young people fighting the forces of cultural repression as it is the urge to boogie.

Based on a true story, Desert Dancer follows Afshin Ghaffarian (Reece Ritchie), a young man who dreams of being a dancer in a country where the art form is practiced only behind closed doors. Afshin’s dreams are fed by bootleg copies of Dirty Dancing and his recruitment by an arts school, where a smiling mentor explains to him that in contemporary Iran, two worlds exist parallel to each other. In the first, official world, the rule of Islam is absolute, and drinking, dancing, and anything resembling sexuality is forbidden. In the second, secret world, rebels like himself teach eager pupils forbidden arts, and students blow off steam in illegal dance parties during which some of the revelers smoke the heroin that is flooding the streets and numbing the populace.

Once he has come of age and reached university, Afshin boldly proposes the formation of a secret dance team. His friends accept, but because dancing is verboten, all manner of scheming and subterfuge is required. At the team’s first practice, the group is surprised to find a beautiful outsider eager to audition: Elahah (Freida Pinto), whose mother was a professional ballerina before the revolution, but lost everything once Islamic fundamentalists took over. Elahah is distinguished by a pervasive melancholy she tries to cover by smoking heroin, the same vice that eventually killed her mother, and Afshin takes an immediate liking to her, both as a dancer and a romantic partner.

Dance movies are generally about exuberant exhibitionism, about people who are so proud of the remarkable things they can do with their body that they want to share them with the world. That’s ultimately Afshin’s goal, too, but to get to that place of creative freedom, he must first endure a gauntlet of suspicion and repression, where he cultivates his gifts in secrecy out of pragmatic necessity.

As a result, Desert Dancer is an unusually quiet, even hushed dance movie. Many of the film’s most powerful moments are free of dialogue, and some of its most powerful sequences eschew sound altogether. Desert Dancer is blessed by a powerful sincerity. The filmmakers clearly believe the bromides offered about the life-affirming power of dance and artistic expression. The conviction that this story matters and deserves to be taken seriously gets the film over its occasional rough patches. Dance movies and musicals often set out to leave audiences with the proverbial song in their heart. Desert Dancer, in sharp contrast, would rather they depart with a deeper appreciation of the power of dancing with or without song, whether it’s the kind other people can hear, or just the kind that exist deep within our souls.