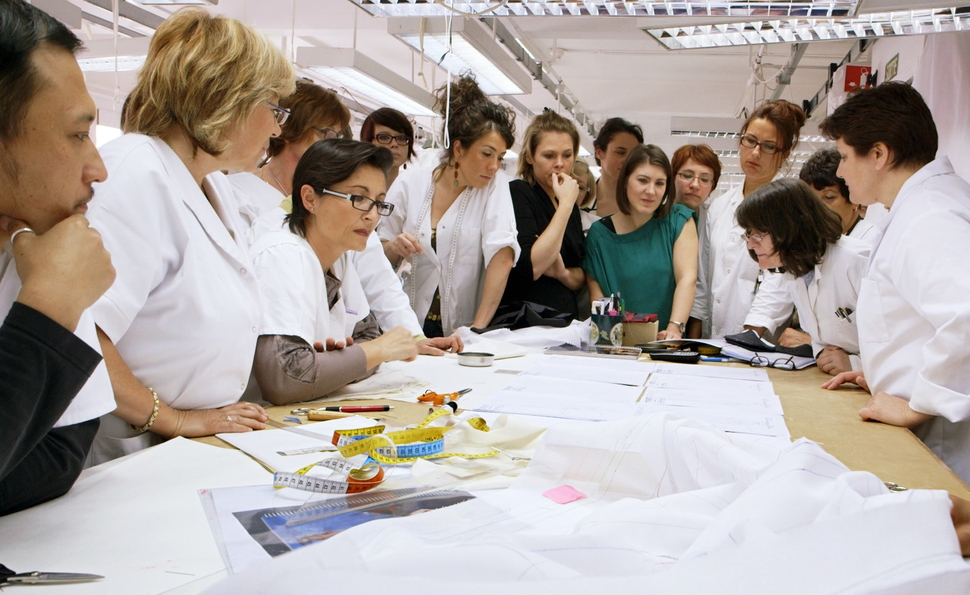 Perhaps more than any other creative endeavor, fashion represents an uncomfortable marriage between art and commerce. The difficulty of that marriage is particularly evident at the upper echelons of high fashion, where storied houses like Chanel, Givenchy, and Dior maintain multiple ready-to-wear, accessory, and luxury-good divisions in part to offset the huge costs of their haute-couture collections, a tiny yet showy sliver of the fashion industry that requires a disproportionate amount of money and human effort to mount each season. The fascinating documentary Dior And I provides a behind-the-seams look at the magnitude of that effort, creating a narrative that presents haute couture as a bridge between the past and future of the label that all but defined the term.

The solo debut feature of director Frédéric Tcheng, Dior And I could be viewed simply as a love letter to Christian Dior, the couture house he created, and the team of people striving to keep it alive and relevant in the modern era. And it certainly is that. But as with another of this year’s best process-oriented docs, Ballet 422, Dior And I functions better as an overview of the many moving parts, calloused fingers, and differing opinions that go into creating the elaborate sartorial confections that stomp down the runway at the end of the movie. The affected, kissy-face fashionistas so often associated with the fashion world at its shallowest are nowhere to be found for the bulk of Dior And I. The doc just features a group of artisans committed to continuing the legacy of the man whose name graces the frocks they create.

Heading up that group is newly instated Dior creative director Raf Simons, a newcomer to couture coming from the very different world of men’s fashion. For reasons that are never really explained, Simons arrives at Dior with only eight weeks to create his first haute-couture collection, an endeavor that typically takes four to six months. Besides lending some Project Runway-esque urgency to the film—which runs only slightly longer than a late-period Project Runway episode—the truncated timeline adds an undercurrent of stress and anxiety to the proceedings, particularly the interactions between Simons and the Dior atelier, or workshop. If Simons is the brain of the new Dior, the atelier is the blood, while Christian Dior’s spirit—which some in the house believe is a literal ghost haunting the workshop—is the soul. The often-fraught interaction of these three elements animates Dior And I, tapping into the divide between artistic vision and creation, the hard work that goes into realizing lofty dreams.

Dior And I also returns again and again to the conflict between history and modernity, from the early moment when Simons is introduced to the denizens of the atelier: When Dior CEO Sidney Toledano asks whether he prefers to be called “Monsieur Raf” or just “Raf,” Simons doesn’t seem to know how to respond, eventually settling on “just Raf,” despite the formality of his introduction to the house’s legion of white-lab-coat-clad ateliers. (For his part, Toledano says they can continue calling him “Monsieur.”) Later, Simons worries that “this house has so much DNA that it’ll be hard to find creative freedom,” encapsulating the film’s central conflict between respecting Dior’s legacy while also radicalizing and modernizing it.

Dior And I repeatedly underlines this conflict, most pointedly in segments that combine voiceover passages of Christian Dior’s memoir with grainy black-and-white footage of his creations, segments that highlight the discomfort Dior felt over having his name literally turned into a brand. He refers to “this Siamese twin who precedes me everywhere since I’ve become Christian Dior,” encapsulating the disconnect between the man and the huge, impersonal entity that bears his name. Simons similarly wrestles with the man/brand divide, struggling to honor the house of Dior while still expressing himself as an artist—an expression that’s dependent on the atelier, its workers (some of whom have been there for three or more decades), and the deeply entrenched establishment they represent. This catch-22 informs every moment of Dior And I, lending a rippling undercurrent of tension to its deep dive into the material processes of creating a haute couture line.

Like his subject, Tcheng takes an approach to documentary filmmaking that honors tradition while striving to leave his own mark. Talking heads abound in Dior And I, but they come alongside long stretches of Christian Dior’s autobiographical ramblings and striking visual experiments, as when old video footage of classic Dior dresses is projected atop curtains of the white muslin toiles festooning the atelier. On a visual level, Dior And I isn’t exactly revolutionary, but it is seeking to project its own voice, and in that respect, it nicely mirrors its subject matter.

But for all its grand statements about artistry and identity, Dior And I is most effective as a study of the hard work, both physical and emotional, that goes into creating something new. The final product may bear one man’s name, but it represents the work of many people—the unspecified “I” of the film’s title. That’s the sort of observation that can be applied to any number of other creative endeavors (like film, for example), but the deep-set reverence for tradition and exclusivity that propels haute couture makes Dior And I a particularly cutting depiction of that idea.