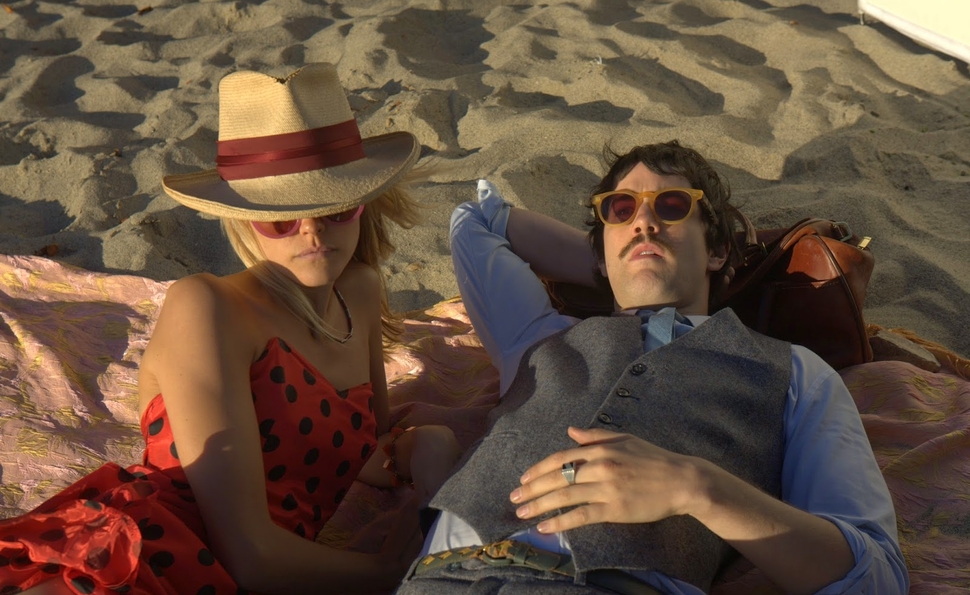 Here’s the pitch: Furniture salesman turned gentlemen thief robs more than 60 banks in Los Angeles in the 1980s. The film is produced by Christine Vachon’s Killer Films, the company responsible for breaking Todd Haynes and a wealth of other indie favorites. It features an ace supporting cast: Patricia Arquette, Chloë Sevigny, and John Doe, among others. It’s powered by an impeccably curated soundtrack that includes X, Gang Of Four, Iggy Pop, and Depeche Mode. No movie is a sure thing, but an atmospheric heist thriller/comedy set in 1980s L.A. with that cast and that production team seems like a sound investment.

But the distance between can’t-miss conceit and did-miss execution is rarely as vast as the one for Tristan Patterson’s Electric Slide, which turns a pulpy story into a turgid, humorless, undernourished slog. Given the improbable story of an amateur thief who bluffed his way through a crime spree, Patterson mostly chooses to ignore its inherent Elmore Leonard kick in favor of a moodier vibe reminiscent of Michael Mann or the Jim McBride-directed Breathless remake, which Patterson explicitly references. Patterson gets caught up in the idea of crooks self-consciously imitating big-screen icons like Bonnie and Clyde, because they lack the experience and know-how to be anything but pretenders. But their vacant pose becomes the movie’s pose, too, in a game of dress-up where everyone’s struggling to approximate the real thing.

The dress-up begins with Jim Sturgess as Eddie Dodson, an L.A. hipster with a John Holmes mustache. Eddie robs banks in a three-piece suit (with a flower in the front pocket), an oversized fedora, and a pair of designer sunglasses. The female tellers Eddie targets find him irresistible, but it’s generally a bad idea for thieves to look like one of the Beastie Boys in the “Sabotage” video. Eddie gets himself into this mess by pouring money into a failing furniture business—first a bank loan he can’t pay off, then a mafia loan to pay off the bank loan, which he also can’t pay off. With the mob boss (a ridiculous Christopher Lambert) breathing down his neck, Eddie picks up a starter pistol at a pawn shop and sets to work, taking small amounts from single tellers and staying ahead of the police. The trouble is, Eddie is more inclined to spend money on his new girlfriend Pauline (Isabel Lucas) and other luxuries than on paying back his debt.

Eddie and Pauline’s outlaw romance is Electric Slide at its somnolent worst, with Sturgess mumbling lines like Brando with chipmunk cheeks and Lucas affecting an eerie mannequin stare that’s like heroin chic without the heroin. (A typical scene: Eddie beckons Pauline to put on headphones while he plays a record for her. Pauline looks utterly bored, takes the headphones off after 20 seconds, and declares in a deadpan that it’s the best song she’s ever heard.) Patterson doesn’t fare much better when Eddie goes from bank to bank on his charm offensive— “Give it to me, XO,” reads his stickup note—because he can’t marshal the energy to give these sequences any tension or comedic pop. That’s just one of the places where Electric Slide departs from films by directors like Mann, who knows how to puncture a moody genre piece with gripping action setpieces. With familiar faces like Arquette and Sevigny turning up in nothing roles, the film looks like a cheap, underproduced facsimile of the crime movies it’s trying to emulate. It goes down in a blaze of hoary.