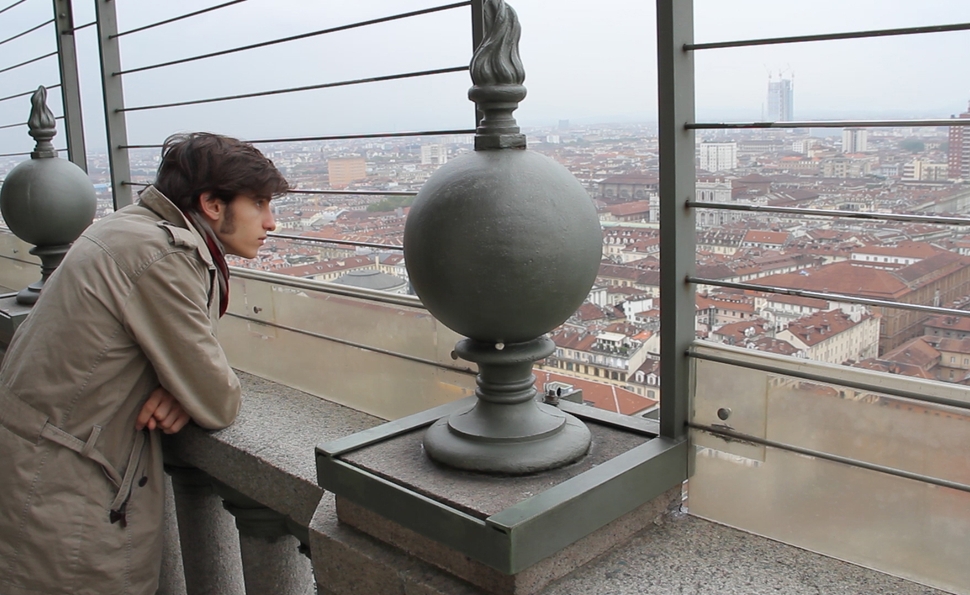 Eugène Green’s La Sapienza is about two men who believe in architecture’s power to save humanity. One is the film’s main character, Alexandre Schmidt (played by Fabrizio Rongione), an architect and scholar who’s become frustrated by all the bureaucracy involved with getting a construction project off the ground. The other man is Green himself—a filmmaker who arranges actors and images with geometric precision.

La Sapienza’s style emphasizes rigidity: in the performances, the shot selection, and the editing. The actors speak in monotone, with faces either completely expressionless, or wearing plastered smiles. They often speak directly into the camera, in solo medium shots and close-ups. Whenever the characters do share a frame, they either stare awkwardly at each other, or off into the distance. It’s as though Green means to take a utilitarian approach to the fundamentals of narrative cinema—acting, blocking, dialogue, and camera placement—in order to create a merely functional living and working space. Then, freed from fuss and clutter, visitors to that space can pay attention to the surrounding environment, and let their minds turn toward something more divine.

At the start of La Sapienza, a morose Alexandre travels through Italy with his equally dissatisfied wife Aliénor (Christelle Prot). There, Alexandre plans to research the work of 17th-century architect Francesco Borromini, an iconoclastic designer who thought in terms of shapes and patterns when his peers were still modeling buildings on the human form. When the Schmidts encounter a younger architect, Goffredo (Ludovico Succio), and his sickly sister Lavinia (Arianna Nastro), they immediately become mentors to their new acquaintances. While Aliénor helps nurse Lavinia back to health, a reluctant Alexandre takes Goffredo to Rome, for further study of Borromini. The very act of trying to pass on their wisdom reenergizes these two married professionals who had been on the verge of some kind of major break.

Devoted arthouse patrons may see in La Sapienza some similarities to Jem Cohen’s Museum Hours, Manoel de Oliveira’s A Talking Picture, and other recent films that incorporate long lectures about art and culture. The difference is that La Sapienza also means to be a character study of sorts, and while Green’s extreme affectations work just fine when Alexandre is describing the differences between Borromini and his contemporary Gian Lorenzo Bernini, they become far too jarring when Alexandre is explaining in a flat voice how his marriage almost fell apart after the birth of their first child. Some sequences in La Sapienza—like a moody historical reenactment that’s nearly all hands, inanimate objects, and voiceover—benefit from Green’s quirks. But then he’ll include a stilted bit of comic relief involving a boorish Australian tourist, and it’s hard to tell whether the performances are so wooden because that suits Green’s artistic purposes, or if he’s just tin-eared.

But while La Sapienza is unsatisfying as drama, it’s frequently beautiful just as a tour through architecturally significant Italian buildings. And it’s intellectually engaging as an elaboration of their larger meaning. The movie opens with Alexandre being introduced at an awards ceremony as someone who “made cities rise from the fields,” which makes him sound like a god. But when he speaks to the crowd, he describes himself as a “materialist” and “secularist” who believes “architecture has nothing to do with passion” and “factories are the cathedrals of the modern age.” La Sapienza is a dialectical film in which everything’s in conversation: two architects, two design sensibilities, and two views on religious faith. And Green seems most interested in how one can leave an impression on the other—like the image of Christ on the Shroud Of Turin that Alexandre and Goffredo view and discuss at one point. It’s as though the director is leaving human feeling out of his work in hopes that he can define it by its absence.