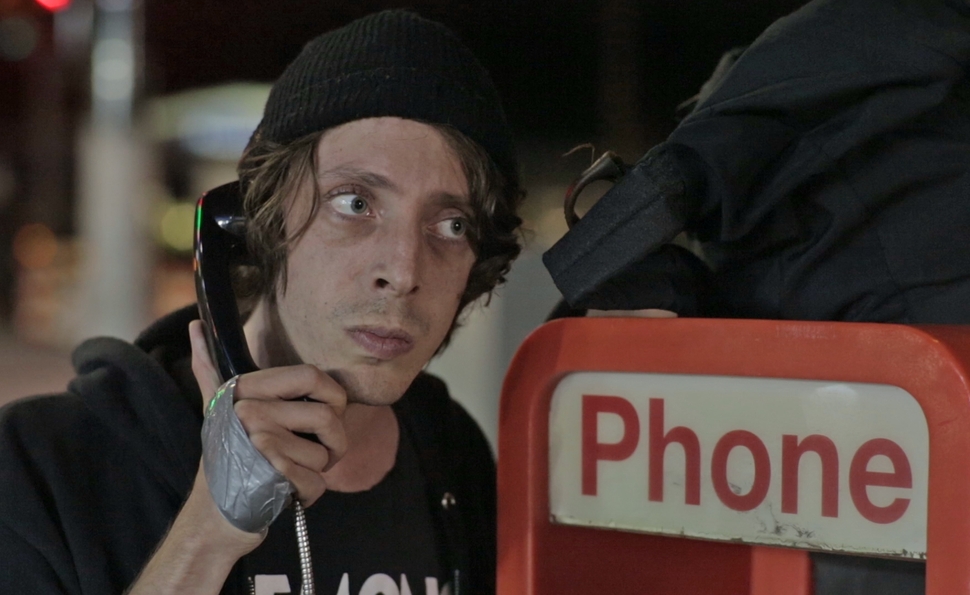 The first long look at Marty Jackitansky, the “angry young man” at the center of Joel Potrykus’ exceptionally unsettling (and flat-out exceptional) comedy Buzzard, is an entire scene shot in close-up, as Marty pulls the first in a long list of petty scams. His gaze is steady and hypnotic, like some wage-slave version of Barbara Steele in Black Sunday. Framed by his greasy hair, Marty’s eyes offer a disturbing window into his soul: alert and shifty, but mirthless to the core. What happens next happens to be hilarious—our hero closing out his $250 checking account so he can take advantage of the $50 offer for a new checking account from the same bank—but it doesn’t offer much relief. As Marty continues to run scams, the laughs continue unabated, but the dread only deepens, because we realize he’s a creature of need, capable of anything but empathy. And he’s been pushed to the precipice.

The third in Potrykus’ “animal trilogy,” following the short film “Coyote” and his debut feature, Ape, Buzzard might be described as a cross between Office Space and Taxi Driver, but with a particularly keen sense of what life is like for those on the fringes of cubicle culture. Joshua Burge plays Marty as a misanthropic slacker who secretly relishes beating the system, but also feels, not without cause, that he’s doing what’s necessary to survive. As the film opens, Marty is logging time as a temp drone at a mortgage company, given to three-hour breaks, lags in productivity, and minor criminal enterprises, like requesting expensive supplies on the office dime, then returning them to a brick-and-mortar store for a cash refund. When his boss asks him to track down the intended recipients of returned tax refunds, Marty has the dim idea to sign the checks over to himself, but it’s a scheme so easily discovered that it sends him on the run—first to his work buddy Derek (Potrykus), who lets him sleep in the basement, and then to Detroit.

The scenes with Marty and Derek in the basement, which the benignly idiotic Derek has dubbed the “Party Room,” are as whimsical as Buzzard gets, like a Mike Judge-esque scene where Derek sees how many Bugles he can eat off a moving treadmill. Potrykus, a Michigan native, has a distinctly Midwestern feel for how twentysomething dudes like Marty and Derek subsist on Hot Pockets, Mountain Dew, and off-brand personal pizzas. But even in this lighter stretch of the movie, Marty has already fashioned Freddy Krueger fingers out of a repurposed Nintendo power glove, and he’s starting to run dangerously short on options. The odyssey he eventually takes has a sick (and perhaps predictable) air of inevitability to the viewers, but Marty can barely see a foot in front of him. Because no matter how disturbed he might be as a person, that’s what it’s like to live hand-to-mouth.

And therein lies the difference between Buzzard and the films it recalls. Viewers may find Marty morally vacant or outright sociopathic, but he’s also just a kid trying to get by without any money. He has a coupon for those Hot Pockets, and works the phone on promotional offers like Adam Sandler in Punch-Drunk Love; when he cuts himself at home and fakes the injury in the office to get worker’s comp, his is the plight of many poor Americans living without health insurance. Potrykus never gets didactic about the class commentary in Buzzard, because Marty’s funny/pathetic scams and simmering psychosis draw the attention away from it. But nothing that happens in the film would be necessary if Marty had two dimes to rub together, and didn’t have to gamble his life away on two-figure second-party checks. He’s a cornered animal. He does what cornered animals do.