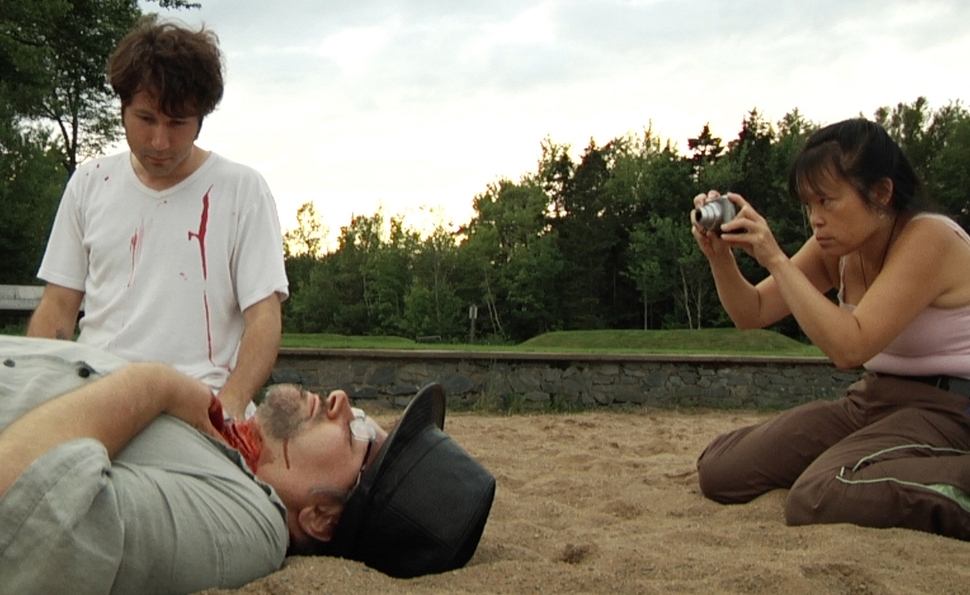 Turns out it isn’t just Americans who believe any attention is good attention. As Kung Fu Elliot opens, its subject—soft-featured, Maritime-accented martial-arts enthusiast Elliot “White Lightning” Scott—is deep in production on his third no-budget fight flick. (They call me “‘Canada’s Only Martial Arts Guy!’” he tells a forbearing DVD store patron at a possibly unsanctioned promotional appearance.) He’s written it himself, and cast his pal Blake Zwicker as his nemesis. His girlfriend Linda Lum, who supports him financially as well as emotionally, is directing.

The completed footage shown from Blood Fight, like the clips from Scott’s prior efforts, They Killed My Cat and The Stalker And The Hero, are amusing testaments to the amateurishness of all involved. It isn’t just that Scott and company can’t write, act, or frame a scene. It’s that Scott’s alleged fighting expertise—the easily demonstrated or disproven skill-set on which he has pinned his stated hope of following in the bloody footsteps of his heroes Chuck Norris and Jean-Claude Van Damme—is plainly Rudy Ray Moore-level.

His collaborators might not see it, given their affection for the guy. But it must’ve been obvious to documentarians Matthew Bauckman and Jaret Belliveau before they purportedly spent two years following Scott around. Surely it would have been simple to check if he really won the martial-arts titles he claims, just for example.

Their choice to withhold the findings of such basic due-diligence investigations until the end of their 88-minute feature—long after the protagonist who at first glance seems like a harmless dork has been unmasked as something much nastier—gives their initially diverting picture a bitter finish. It’s as if after encouraging viewers, again and again, to delight in Scott’s quixotic folly, they want to reassure viewers that he deserved derision all along. And Lum, the seemingly practical, clear-eyed partner who says in no uncertain terms that she’s waiting for him to propose to her? Oh well. Better luck next time.

The film’s narrative fulcrum is a visit to China, wherein Scott cheerfully introduces himself to women as a Western action star. He asks for an audience with a monk, who observes Scott’s slow kicks and unsteady stance and starts to correct Scott’s technique. The monk is polite, but can’t stop himself from smiling when Scott doubles down, insisting he’s a seven-time kickboxing champion.

It’s funny, as fool-on-reality collisions often are. But it stands out because it’s one of the few times the directors show Scott in the world outside his (girlfriend’s) house, talking to someone who doesn’t care whether they pop his balloon. His return to Canada allows the camera to see things he actively conceals from Lum. Scott shamelessly gropes a woman with whom he’s rehearsing a fight scene. He begins to indulge his less-articulated aspiration to perform in porn videos. When Lum demands to know the identity and intentions of a woman who visited him at her home in the middle of the night while she was away, Scott’s equivocation is harder to stomach than the self-amputation in 127 Hours. His lying makes his fighting look graceful.

This is no F For Fake-style investigation into the nature of charlatanism and the roots of the audience’s credulity. Bauckman and Belliveau don’t connect their observation of Scott to a larger idea, and their interest never seems rooted in anything more empathetic than morbid curiosity. Maybe it’s just too tough to look away when he reclines in his briefs next to stacked piles of Chinese currency, and thoughtfully scratches his scrotum while going on about how much he respects women. Congratulations, filmmakers: You’ve captured an honest-to-God creep who is briefly, marginally more amusing to observe than one who doesn’t speak with a funny accent and harbor a wacky dream of one day spin-kicking the Canadian Bolo Yeung in slow motion.

Kung Fu Elliot’s violent climax arrives so swiftly, it raises the question of whether everything preceding it has been a hoax. A few title cards imply the filmmakers are as beguiled as the audience, but their shrugs seem phony: You knew this guy was a Scorpion when you pointed your camera at him, didn’t you?