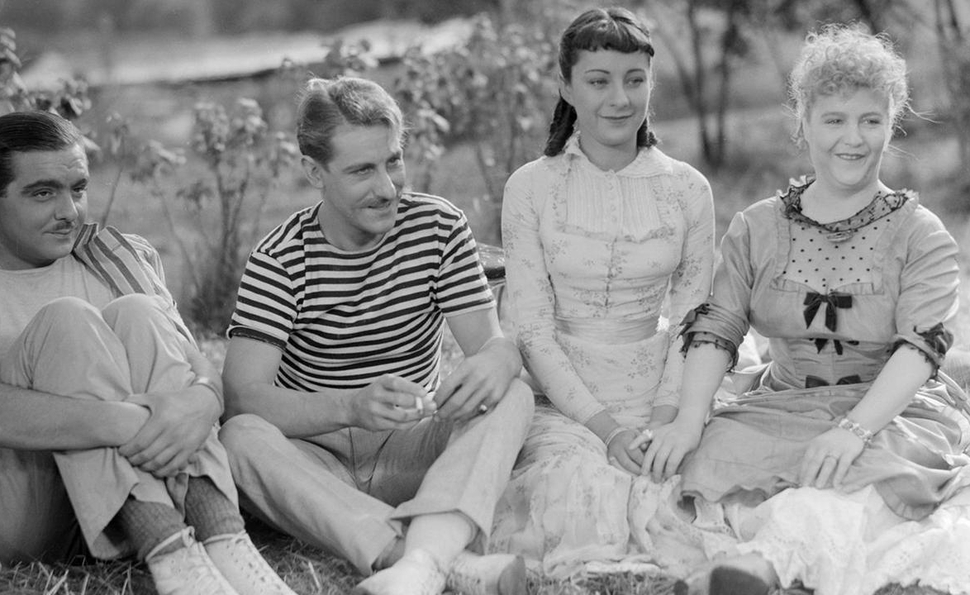 A Day In The Country

Jean Renoir’s “A Day In The Country” is easily the most charming movie ever made about two rakish Frenchmen conspiring to have sex in the woods with a married woman and her engaged teenage daughter. Based on the Guy de Maupassant short story “A Country Excursion,” Renoir’s film stars Sylvia Bataille as Henriette, who accompanies her full-figured, giggly mother, her bloated father, and her whiny, wimpy fiancé on a Sunday ride along the Seine in the 1860s. The family stops at an inn, where two local boaters, Henri (Georges D’Arnoux) and Rodolphe (Jacques B. Brunius) are so captivated by Henriette that they quickly find a way to keep the men in the traveling party pacified while they take the women out on their skiffs. Once they’re all away from prying eyes, the chase is on.

“A Day In The Country” was shot in 1936 as part of an experiment by Renoir and his producer, Pierre Braunberger, to see if they could make a short film as full and polished as a feature. The plan was to combine this picture with one or two others in an omnibus, but shooting went way over schedule due to the complications of making a movie outdoors during a hot, rainy summer. Renoir eventually had to leave the set to start work on a different project, and “A Day In The Country” remained unfinished even when it finally saw a theatrical release in 1946 (after the director had moved to America to work in Hollywood). The final version of the film is 40 minutes long, and it does feel like it’s missing a scene or two that could’ve rounded it out, though what’s on the screen is pretty close to de Maupassant’s story, right down to its poignant epilogue.

Yet while “A Day In The Country” isn’t as perfect a film as it might’ve been, it’s so close that it frequently sparks in viewers the same “vague sense of yearning” that Henriette talks about when she talks about nature. One big reason why the movie’s so wonderful is because of the freshness and almost fragile sensitivity of Bataille, whom Braunberger wanted for the lead because he had a crush on her. Renoir contrasts the inarticulate innocence of Bataille’s Henriette—the kind of poetic soul who can be moved to tears by the sound of a nightingale—to the randiness of the countryfolk, who talk openly about their fear of sexually transmitted diseases, their frustration at being unable to see up Henriette’s dress, and how sometimes a hefty date is preferable to a skinny one because “there’s a lot to keep you busy.” The brazen carnality of “A Day In The Country” is refreshing even now, and while Henri and Rodolphe are more blunt about it, there’s a gleam in the eye of Henriette’s mother too when she chuckles to her escort that, “In your undershirt you look almost naked.”

Renoir’s assistants on “A Day In The Country” included future directors Luchino Visconti and Jacques Becker, as well as pioneering photojournalist Henri Cartier-Bresson. All were relatively young, and full of both ideas and ideals. Renoir had already developed a philosophy of cinema that demanded live sound and long takes, to allow actors the time and space to live in a moment, with minimal post-production tweaking. Yet while he was a purist about staging scenes, Renoir was playfully arty when it came to what he wove in and around the core of the film. “A Day In The Country” is full of clever little visual flourishes, as Renoir mounts a camera on a moving swing and on the prow of a boat to capture the giddiness of people at leisure on a beautiful afternoon.

What makes this all so disarming—the sexual frankness, the lush imagery, the mid-19th century mannerisms—is that Renoir valued honesty, in his dialogue and in his characters’ interactions. He wanted to see his actors existing, not performing. He summed up the whole point of his work well in his autobiography, writing, “The saving grace of cinema is that with a little patience, and with love, by avoiding conventional make-up and taking liberties with orthodox lighting, we may arrive at that wonderfully complex creature which is called Man.”

The most substantial extra on Criterion’s Blu-ray is Une Tournage À La Campagne, the result of a 1994 effort to edit the four hours of “A Day In The Country” outtakes into a tight 90-minute glimpse behind the scenes of a Renoir production. Even more useful is a companion video-essay by scholar Christopher Faulkner, who explains what Une Tournage À La Campagne reveals about Renoir’s perfectionism, and how that counters his reputation as a great improviser. Faulkner is interviewed at length in another featurette, where he positions “A Day In The Country” in the context of the more militant cinema that Renoir was making at the time, suggesting that this production was intended partly as a vacation and partly as an homage to his father, the famed impressionist painter Pierre-Auguste Renoir. The disc also contains two vintage interviews: one with Braunberger, who describes his lean early years working with Renoir, and one with Renoir himself, who sagely encourages young artists to steal freely, adding, “The story doesn’t matter, but how it’s told.”

GoWatchIt: Buy. Rent. Stream A Day In The Country