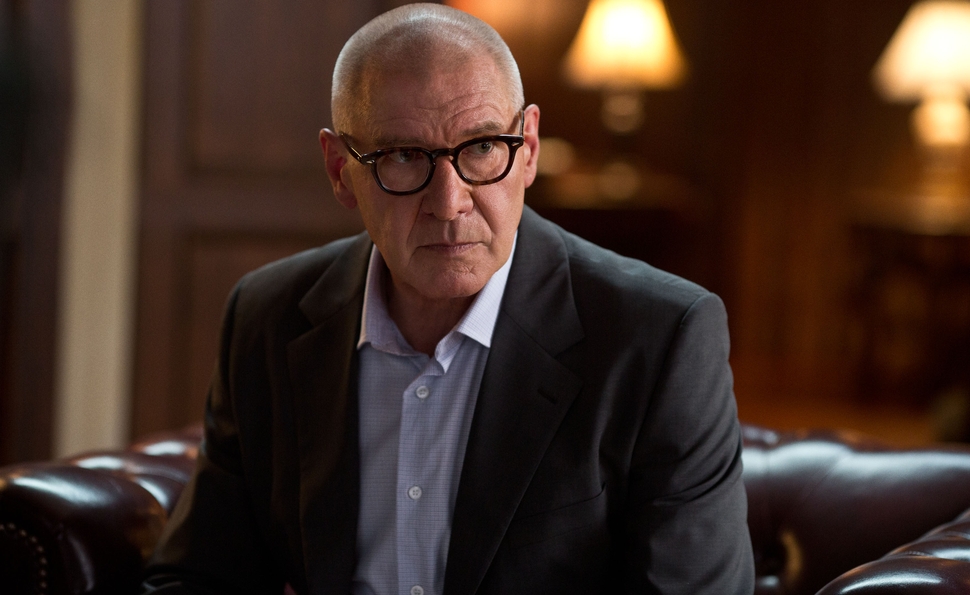 At a crucial moment in the preposterous techno-thriller Paranoia, men place their cell phones on a table and remove the batteries, the same way gunslingers would place their six-shooters on a table and visibly remove the bullets to signal their honorable intentions in a Western. In the newfangled world of Paranoia, cell phones and their limitless capabilities are the new weapons of choice. Wi-fi is the new Wild West, and these renegades are out to control not just a dusty hick town, but rather a vast international market. Information is power, and in Paranoia, cell phones are potent tools to both generate and disseminate tremendous amounts of highly specific information. They’re so powerful they make silly old guns look primitive by comparison.

Paranoia inhabits a world of power and intrigue populated by Machiavellian schemers who are incredibly savvy and paranoid, until the screenplay requires them to be astonishingly stupid and oblivious. Paranoia betrays a pronounced contempt for plausibility that begins with casting strapping Nordic god Liam Hemsworth as a brainy computer genius and extends to casting the lilliputian Richard Dreyfuss as his father Frank, a development that makes sense only if Hemsworth’s dead mother was a 9-foot-tall Viking goddess.

The hilariously miscast Hemsworth stars as Adam Cassidy, a hotshot technological wiz who loses his job working for cell-phone titan Nicolas Wyatt (Gary Oldman) after a pitch gone awry leads to him and his whole team getting fired. Cassidy decides to take himself and his team, all cartoonish exiles from The Big Book Of Nerds, out for a decadent night on the town on the company’s dime after human resources neglects to cancel his expense account. The imperious Wyatt then rewards Cassidy’s shenanigans by hiring him to infiltrate the company of his former mentor and current arch-rival, Jock Goddard (a hairless, bespectacled Harrison Ford), a titan of industry who will stop at nothing to destroy his former protege. It’s a Faustian bargain that puts the desperate young man at the mercy of some very powerful and ruthless figures.

Cassidy finds himself acting as a human pawn in an elaborate chess game, represented, amusingly and predictably enough, by Adam and Wyatt literally playing chess, a moment that speaks volumes about the film’s weakness for the ham-fisted and obvious. Paranoia initially tries to provide a broader social and political context for its high-concept idiocy by positing its protagonist as part of a generation that has been denied its rightful chance at the American dream by greedy oligarchs holding onto power instead of passing it down to the next generation. The film similarly plays up the class warfare/generational revenge aspect by giving its protagonist a dead mother who might have lived had his family only had better insurance, and a father who was never able to provide for his family in the manner he would have liked in his humble job as a security guard. This leaves Adam with a lingering sense of shame about his humble origins and a desire to never end up like his dad. Yet it’s as hard to buy the strapping, confident, and model-handsome Hemsworth as an oppressed underdog as as it is to buy him as a technological wiz and progeny of a tiny, mole-like Jewish man.

Wyatt and Goddard (men as powerful as these must only be referred to by their last names) must be suffering from the same affliction as the protagonist of Flowers For Algernon, since they begin the film as razor-sharp players adept at figuring out every angle, yet grow stupider and more oblivious with each successive scene, until the film’s central chess game has devolved into a skirmish more  akin to Rock ’Em Sock ’Em Robots. But Ford and Oldman’s scenes together are Paranoia’s sole redeeming facet. Ford seems to be enjoying himself playing a man whose outer folksiness conceals inner ruthlessness, and it’s fun watching these two old pros have at it. But their scenes together are less a clash of the titans than a pair of bored old lions batting at each other on a lazy afternoon to pass the time in comfortable but confining captivity. For Ford and Oldman, this is a real resumé-eraser, the kind of C-level material that doesn’t end up on Oscar memorial reels.

As Paranoia repeatedly asserts, technology never stops evolving. At this point, it’s better and more powerful than magic. Yet the paranoid techno-thriller remains as dopey and crazily implausible as ever. The genre has yet to evolve past the age of the football-sized cell phone, and as long as filmmakers keep churning out techno-nonsense like this, it probably never will.