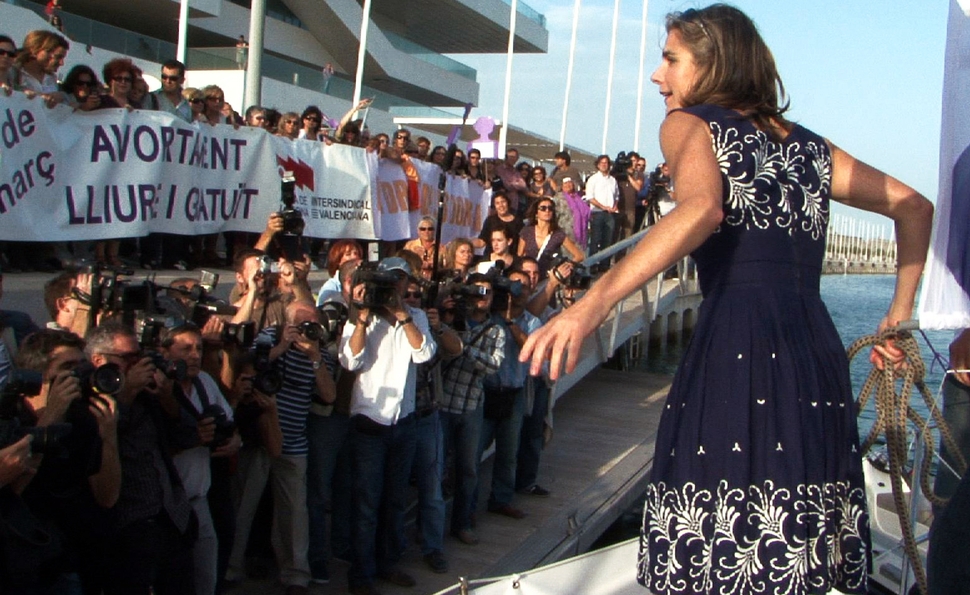 The riveting Vessel is an advocacy documentary in several senses of the term. At its most basic, surface level, it’s advocating for the legalization of safe, medical abortions for women worldwide, via the mission of the organization on which it centers, Women On Waves. In another sense, it is a profile of a single advocate, Dutch physician Rebecca Gomperts, a former Greenpeace ship’s doctor who founded Women On Waves in 1999 with the hope of providing safe medical abortions to women in countries where the procedure is illegal. And on a much deeper, perhaps even unintentional level, it is a documentary about the nature of advocacy, about how those who fight for a cause must strategize, organize, and improvise in order to succeed in the face of those who would silence them and those they seek to help.

It is on this deeper level that Vessel proves most extraordinary, though its subject matter is provocative enough to make even a surface viewing an edifying experience. Cobbling together a decade of archival material (some of it donated by other filmmakers who weren’t able to complete their own projects) with talking-head interviews and sketchy animation sequences, director Diana Whitten compresses a decade-long story into a sleek, swift 87-minute package that telegraphs the unique, turbulent history of Women On Waves. Gomperts founded Women On Waves after seeing the toll unsafe abortions have on women in countries that outlaw the procedure. (According to the film’s statistics, around 47,000 women die every year from unsafe abortions.) Her plan: Sail a Dutch ship into international waters, where the laws of the country of origin apply, and perform safe medical abortions there for women living in countries that forbid the procedure.

The difficulties in actually carrying out that audacious plan began with the Women On Waves ship’s maiden voyage to Ireland in 2001, which attracted loads of media attention, but failed to actually provide any abortions, due to a technicality involving the ship’s medical license. Undeterred, Gomperts and her team tried again in Poland in 2003, then again in Portugal in 2004. Each mission provided them with new barriers to success (in addition to the ever-present protesters calling them “Nazis” and “fascists” and throwing eggs at them, the Portuguese Navy actually dispatched two warships to keep the boat from entering Portuguese waters), but also new opportunities to spread their message. But as the ship sails into each new port, it becomes apparent it’s much better at attracting attention than actually providing procedures, requiring a shift in approach. While maintaining the boat more or less as a publicity engine, Women On Waves went to ground, working with local activists in countries like Ecuador to establish and promote a hotline, and eventually a sister website, Women On Web, that assists women in performing their own abortions at home using the drug Misoprostol, which is available worldwide. (Medical abortions use Misoprostol in tandem with another drug, Mifepristone, for a 95 percent effectiveness rate, but Misoprostol used on its own has around an 80 percent success rate.) By 2009, the group has begun training volunteers and providing pills in countries where it’s too dangerous to wage a publicity campaign, like Tanzania, but are still in need of its services.

Through it all, Gomperts remains the figurehead and driving force of the Women On Waves mission, and much of Vessel’s allure lies in watching her navigate and adapt to this position over time: She goes from tentatively greeting the Irish press in 2001 to boldly instructing viewers how to perform a medical abortion at home while on Portuguese television, to arguing that “the only bad publicity is your obituary” while planning to hang a banner with the hotline’s number from the giant statue of the Virgin Mary in Quito. A doctor who attended medical and art schools simultaneously, Gomperts is a fascinating subject in her own right, but watching her draw on her rock-solid conviction to inform and grow a small army of women advocates is exciting, and important, to witness. She is keenly aware of the importance publicity and public conversation play in her cause, and is all too happy to play up that element; but her concern and regard for the individuals she seeks to help is just as apparent.

Like Gomperts, Vessel is not above aiming right for the pathos, playing voicemails and displaying onscreen heart-wrenching emails from scared women seeking aid. It’s also boldly candid at times, as when it lays out step-by-step, via an animated sequence, how to use Misoprostol to induce a medical abortion. But more often, Whitten lets her footage, and the women in it, tell the story as they experienced it, and discuss the issue as they see it—that is, as an undeniable right all women have, regardless of what the laws of their country say. There’s little room for argument or debate in Vessel—save for Gompert’s brilliant on-air takedown of a Portuguese critic—which is concerned less with validating its beliefs than in showing how those beliefs have been, and will continue to be, spread across the globe. Vessel is much more than a documentary about abortion rights; it’s about the conviction, creativity, and sacrifice that goes into creating a movement.

Vessel opens today at the IFC Center in New York, and is available via VOD beginning January 13.