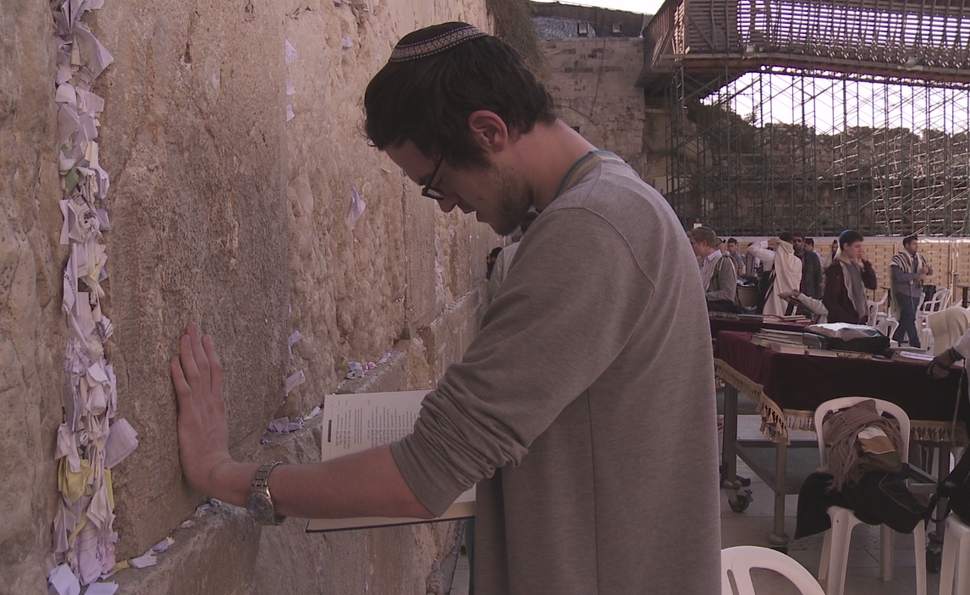 “Isn’t calling Germany your ‘home’ going a little too far?” Yael Reuveny’s father asks her in the opening minutes of her documentary, Farewell Herr Schwarz. The question comes seconds after Reuveny’s parents casually, jovially ask their daughter how to sit on the couch for her film: Can his arms, relaxed and crossed behind his head, remain there? Maybe Mom and Dad should hug each other on the couch? But then Reuveny mentions her impending move to Germany. Suddenly, the mood changes. Her parents’ faces darken, and their eyes dart away from the camera. They become lost in thought. The resulting conversation becomes a matter of semantics, both humorous and tinged with tension, of what “home” truly represents.

Reuveny’s father considers a “place of residence” and “home” two very different things, and Germany could never be called the latter. Reuveny’s parents, Zionists whose kids were born and raised in Israel, are typically resistant to the idea of living in the Diaspora. Her move to Germany is a form of betrayal in their eyes. Her grandmother, Michla Schwarz, formed the same staunch opinion when leaving Europe after the Holocaust; as the sole member of her family to survive the concentration camps, she found sanctuary in Israel, where she lived the rest of her life.

The tension between Reuveny and her parents surfaces repeatedly throughout the film, but it’s born from ideological certainty, not some interpersonal issue.  Farewell shapes Reuveny’s understanding of her Zionist identity after she makes the move, which was prompted by the unearthing of new details in her family’s Holocaust story. It’s a too-strange-for-fiction tale: Two of her family members, her grandmother Michla and grand-uncle Feiv’ke, each believed the other was dead, and they never saw each other again.

Feiv’ke actually survived the concentration camps. But he chose to live the rest of his life in Schlieben, Germany, mere blocks away from the camps that nearly killed him. Michla failed to find him at a train station in 1945 Lodz, where their reunion had been prearranged by supposedly well-meaning strangers. Later, she was told he was tragically killed the night before. Reuveny probes and questions the accuracy of these events, unveiling new information about her grand-uncle through his descendants. Calling himself Peter after the war, Feiv’ke took on a new identity scrubbed free of his Jewish background, married a German woman, and raised three children in East Germany. Had he purposely left Michla and his family behind? How could he have possibly lived so close to the horrors he’d witnessed against his people for so long? Why did he never contact his family? Did he purposely skip the Lodz meeting, or genuinely miss Michla? If they’d met, how different would their family be today? All those years Michla spent in mourning could have been prevented. Perhaps she would have been a happier person.

Farewell isn’t particularly interested in answering these unanswerable questions. A lesser doc might have tried to sensationalize Michla’s life-altering day at Lodz station through shoddy dramatization, as in other Holocaust docs like No Place On Earth. Instead, Farewell examines the psychological impact of the shocking news for all three generations through a series of simple conversations with Reuveny. The lack of footage poses a real problem for the filmmaker, who relies on repeated close-ups of old black-and-white photos, which become increasingly haunting as the story builds, but sometimes feel excessive and regurgitated. The film works best when it focuses on the talking heads. Reuveny captures everyone’s initial reactions to the news and how their feelings change over time, uncomfortable silences and all. She knows exactly when to cut and when to pause, to let those moments of silence speak for the deceased, and let the pain of the past resonate within the frame.

One of the film’s most fascinating developments is Reuveny’s discovery of Peter’s grandchild Stephan, who works at the Great Synagogue in Berlin and studies Jewish history. Stephan’s genuine desire in cultivating his religious identity cannot be denied by the puzzled, slightly apprehensive Reuveny. The Israeli flag hanging in his studio apartment and his broken Hebrew are curios for her family, but they accept him as a real family member. The same holds true for Feiv’ke’s son, Uwe, who’s insistent on changing his father’s gravestone to include his Jewish name. It’s a meaningful but small gesture in a situation where nothing else can be done to express respect. Whether Reuveny’s mother accepts it is a different matter, one she’s not entirely certain of herself.

Farewell is a beautiful, lugubrious family story filled with shots of faded photos, sleet-ridden German streets, and an empty, sunlit Israeli cemetery. One of the closing scenes shows the fated Lodz station being demolished, but Farewell never suggests that history is being erased, or that the Holocaust is receding in memory. Rather, Reuveny explains that living her life abroad, on the same land that caused her people so much suffering, has instead deepened her knowledge and appreciation of her roots. Farewell suggests that despite the uncertainty and difficulty of such a task, rewriting history to incorporate new information and complexity is necessary for her generation, and that it’s possible to remain respectful of a painful past that should never be forgotten.