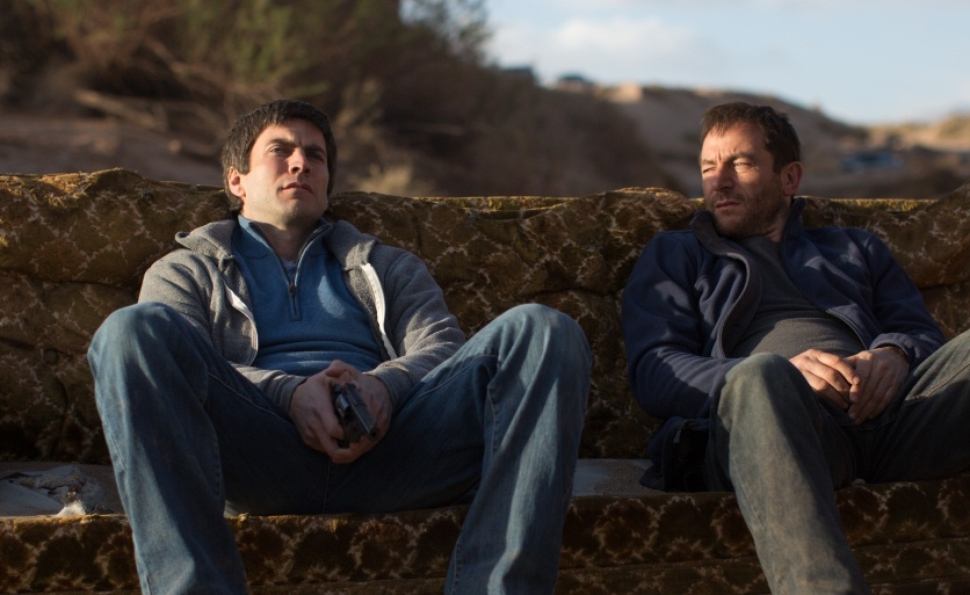 Over their considerable oeuvre, the Coen brothers have perfected the man-in-over-his-head story. Almost always in an effort to scam money, protagonists in Coen films concoct success-proof plans that spiral out of control at the slightest provocation, not infrequently leaving a trail of corpses in their wake. The Coens live in a world where transgressions always beget punishment, and so foolhardy men are always called upon to answer for their crimes.

Saar Klein’s debut drama After The Fall shares the Coens’ morality and their affection for the fish-out-of-criminal-water premise, but notably dumps the instant karma that governed such films as Fargo and The Hudsucker Proxy. After The Fall takes place in a universe located a bit closer to our own, where issues of ethics weigh heavily on the mind of Bill Scanlon (played with characteristic detachment by the dependably off-putting Wes Bentley), but don’t resolve themselves with Coens-esque clarity. The bad guys have a funny way of walking away totally unscathed, and so Klein mines drama from the cognitive dissonance that results when an upstanding guy begins to suspect that there’s no point in living an upstanding life.But don’t be misled: pitiful writing and tone-deaf direction squander this promising premise. A film that could only succeed by sorting through gradually darkening shades of gray works exclusively in embarrassingly bold strokes.

After The Fall opens on a vision of domestic tranquility as proud papa Bill frolics in his prized in-ground pool with his beautiful wife (Vinessa Shaw) and suspiciously telegenic children. Klein goes right to work establishing character with a grating lack of subtlety. An early scene shows Bill chastising his son for cheating on a school assignment. Shortly thereafter, he outs himself for crossing over the line during a bowling outing with his buddies. Klein stops just short of Bill gently chiding a Boy Scout for accidentally stepping on a grasshopper. But an unexpected dismissal from his job at a loan-adjustment firm tests Bill’s squeaky-clean character. He’s got bills to pay and children in need of iPads, so the family man toys with alternative avenues of revenue. Without the chemistry know-how for a meth start-up, Bill has no choice but to dip his toe into the turbulent waters of petty crime.

Breaking Bad, by the way, provides a clarifying counterexample in revealing the weaknesses of After the Fall. Showrunner Vince Gilligan memorably explained that the overarching objective of the show was to turn Mr. Chips into Scarface. Over its many seasons, Breaking Bad slowly and methodically dragged its antihero deeper and deeper into depravity, letting audiences witness one man’s complete moral dissolution over a span of years. After the Fall attempts a similar arc, but compresses it to a run time just under the two-hour mark. As such, Bill’s complete transformation comes off as contrived and hurried. It’s a pill too big to swallow.

The liberal sprinklings of assorted nonsense don’t do the film any favors, either. Shortly after he embarks upon his new life outside the law, Bill goes on an absurd knight’s errand to straighten out a jerk boss who barks incessantly at a female convenience-store employee. Bentley’s intermittent voiceover monologues begin nowhere, move with no sense of direction, and end no place. Klein leaves lots of long, contemplative silences in his cut, giving audiences ample time to ponder the fragility of human virtue, or, more realistically, guesstimate the time remaining in the film.

It’s a shame, too, because Klein’s cardboard dialogue (a scene in which an enraged Bentley screams “PIGGIES!” at a roomful of bankers flirts with The Wicker Man’s “Not the bees!” levels of silliness) hobbles some admirably well-shot footage. In Klein’s hands, a car wash becomes a swift visual metaphor for the inescapable darkness closing in on Bill. On multiple occasions, Klein traps Bill in the frame to mirror his dead-end station in life, imprisoning him behind window panes and doors left slightly ajar. Klein also spins Bill’s cherished pool into a rather hoary symbol, but for the most part, he suffuses images with a quiet power.

After The Fall nearly comes into its own as it lurches into its final act, in which Bill must reckon with the shocking lack of consequences for his reprehensible actions. But by that point, too much damage has been done. Plot developments too deliciously preposterous to spoil here have already been deployed, and Klein has long since outed his own rudimentary understanding of character development. After the Fall wants so badly to grapple with weighty issues of justice, morality, and order, but lends Bentley the complexity of a plastic bag blowing around a wind eddy. At least he already knows what that’s like.