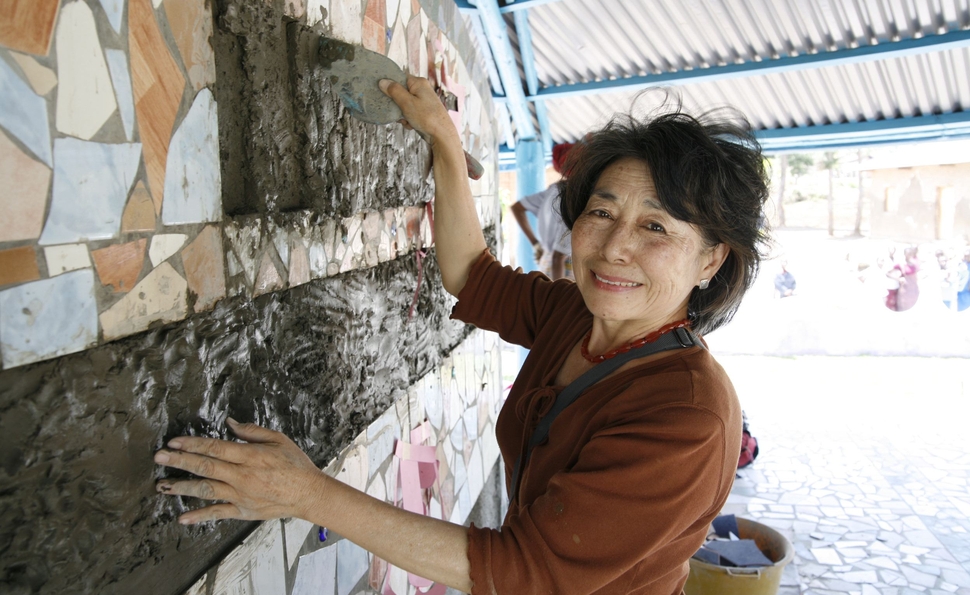 Lily Yeh’s life is marked by contradictions, a variety of which are made clear early and often in Glenn Holsten and Daniel Traub’s The Barefoot Artist. Born in China during World War II, Yeh is obsessed with traditional Chinese landscape paintings—pristine works reflecting what she refers to as “the dustless world.” That world isn’t necessarily a reachable goal, and it bumps up against her own messy life, and her desire to literally get her hands dirty when it comes to creating beautiful works of art.

The Barefoot Artist attempts to cover large swathes of Yeh’s life, laying out a non-linear narrative that often fails to make connections between disparate elements, then zeroes in on a key event that undoubtedly marked the later part of Yeh’s adulthood. (For details, see The Reveal.) Yeh’s charm and compelling story keep things moving along, even as the documentary struggles to find the kind of evocative creativity that she conjures up with her own work.

Yeh came to America from Taiwan in the 1960s to study art, intending to pursue her love of landscapes, but she was upended by the vastness of her new life. (Another contradiction: Yeh is a planner, but her life often goes off in unexpected, unforeseen directions.) Yeh soon had a husband and a son, and had started pursuing large-scale public art projects that look nothing like the neat, tidy works of her youth. But her passion for her work and art in general—instilled in her from a young age by her beloved, seemingly perfect father—remains strong no matter what she tackles.

Holsten and Traub’s film hopscotches across the globe with Yeh, opening in Rwanda before zipping to Philadelphia, various provinces in China, Palestine, and beyond. Yeh’s life is big, colorful, and exhausting, but her message—and that of her organization, Barefoot Artists, from which the film pulls its title—is that of hope, beauty, and equanimity in art. Yeh travels the world to teach art, not by imparting precise skill-sets, but by helping her students heal emotional wounds by expressing themselves artistically. As the film skips around from time and place, a handful of transitions are smooth and feel natural—like going from 1990s-era Philadelphia to modern China, in service of telling tales about her father—while others don’t fare nearly as well, and the effect is choppy and unrefined.

Yeh is an engaging subject, a tiny, bold woman who knows her own mind but also manages to be welcoming and accommodating to other people and ideas. It’s no surprise that she relishes helping and teaching people, and she seems to be especially good at it. Yeh is refreshingly frank about her life, and she’s consistently able to offer insight into her choices, which is rare for any subject. The film’s shaggy style benefits from Yeh’s keen grasp on her life, and her steady presence guides the action even as The Barefoot Artist grasps for clarity.

Early in the film, Yeh requests that her Rwandan charges use art to express their pain, and her line of questioning about people’s departed families—direct, almost abrasive, deeply personal—might seem initially jarring. The way Yeh steadily unveils family problems of her own during the course of the film is a natural outcropping of her interest in people and their families, and Holsten and Traub take their time in revealing Yeh’s secret.

The film’s action picks up considerably during its second half, when Holsten and Traub let the emotion of Yeh’s story take center stage, adding a distinctly human element to the previously interesting but relatively impersonal storyline. Yeh, strong-willed and consistently of her own mind, finally gives herself over to the messiness and uncontrollability of the world—the dusty one, at is were—and the result is a final 30 minutes that provide a layered, lovingly rendered look at a woman who works to make everything she touches more pleasing to the eye and heart.