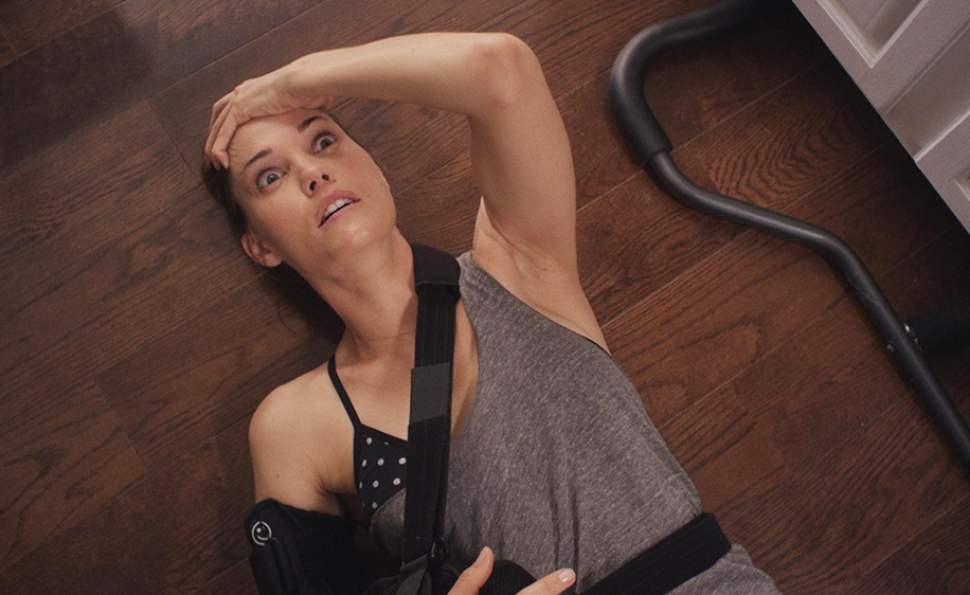 Take Care could have been great, if only it were any good at all. A film about an injured young woman who convinces her ex-boyfriend to be her primary caregiver had every prognosis to emerge as a romantic comedy for the age of Obamacare, something to combine the vulnerability of the body with the twinned messiness of recovery and relationships. But the movie is dreadful, filled with painfully broad humor, grating performances, and acidly rendered characters.

Trouble starts early, during the opening credits, as hapless yuppie Frannie (Leslie Bibb, who hits the ground mugging) returns from the hospital following a car accident that has left her with a broken arm and leg. Her sister and friend try and fail to lift her crippled body up to her fourth-floor New York City walkup; eventually, they enlist an uptight stranger in the building (Michael Stahl-David) to haul her up on his back. None of this—the shrieking, the grunting, the slamming into walls, the halfhearted attempt at absurdity—is remotely funny, yet the sequence drags on for an eternity. It proves an all-too-accurate capsule of the film’s comic sensibilities.

Take Care is the kind of clueless movie that justifies an incapacitated hero refusing her sister’s offer of assistance because the sister commits the dual sins of being annoying and living in Montclair, New Jersey. With this baseline established for Frannie’s persona, it’s impossible to view anything that follows as motivated by desperation rather than petty narcissism, but anyway: Having no one else to watch over her, Frannie turns to her ex-boyfriend Devon, whom she took care of for two years after he was diagnosed with colon cancer. (Once he recovered, he left her and became a tech millionaire.) Thomas Sadoski plays Devon with an unnerving alien reserve that clashes severely with the hysteria of those around him.

Though Frannie still feels jilted (her friends call Devon “the devil”), she wants the debt repaid. This brings up all kinds of fascinating dramatic questions, like: How does such a dependent arrangement carry on for two years between casual romantic partners? Was Frannie acting purely out of compassion all that time, or was there some guilt mixed in? And is someone required to stay with a person they don’t like if they stuck together through a debilitating illness? The film is already dialogue-heavy and largely confined to a single set; if it had any brains at all, it would have taken the time to float some of these questions. Instead, writer-director Liz Tuccillo pads her time with a love triangle involving Devon’s current squeeze Jodi (Betty Gilpin), a woman whose only role in the story is to go crazy with jealousy. As such, she exudes unpleasantness from her first scene on.

Everyone in Take Care is repulsive, for a litany of reasons. Frannie vows to eat only fruit for the entirety of her recovery—“I don’t want to get fat”—and her friends see nothing wrong with this. Minutes into the film, the second of Frannie’s two—yes, two—Gay Best Friends proclaims, “Girl, you are going through it.” And even after Jodi’s suspicions of Devon’s infidelity prove completely founded, the movie still has her go out as a cartoon villain, lest she linger long enough to cause a legitimate conflict.

For all the flack mumblecore takes for its obsession with young, white urbanite problems, many films with that label know how to approach their characters with wit, heart, and insight. A movie like Take Care shouldn’t settle for being a dumb, broad will-they-or-won’t-they yuppie romance. It should feel as intimate and gripping as the casts on Frannie’s arm and leg. Audiences could sue this film for malpractice.