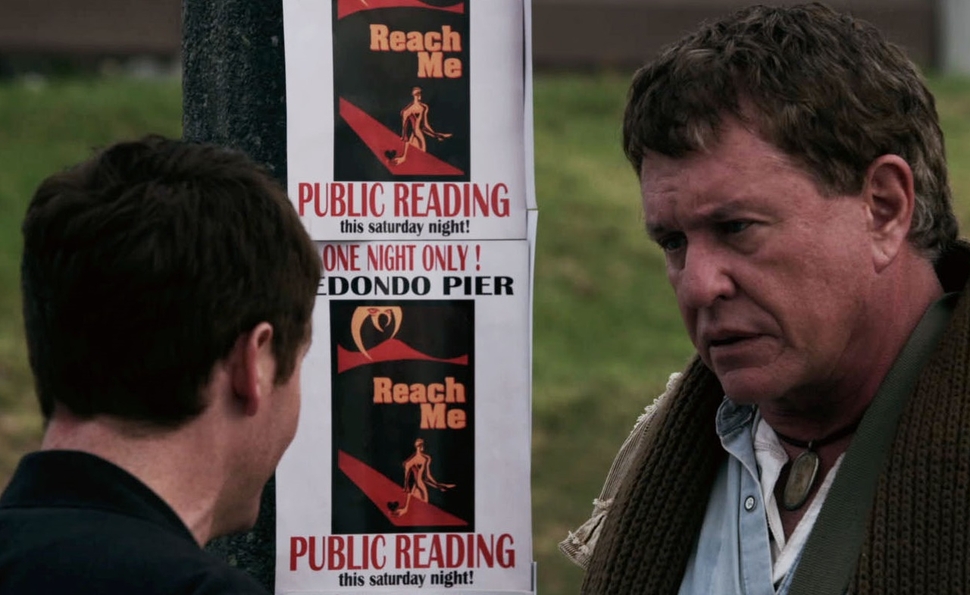 Writer-director John Herzfeld must have a hard drive full of blackmail fodder against half the residents of Hollywood’s B, C, and D lists. How else to explain the presence of so many recognizable, semi-sought-after actors in Reach Me, Herzfeld’s limp, tonally schizophrenic, generally embarrassing attempt to vacuum-pack a Short Cuts-style ensemble dramedy into less than half of Short Cuts’ 187-minute running time?

The title refers to an eponymous self-help longread that has “gone viral,” as we’re told throughout the film, which is an odd way to describe a successful book when “bestseller” is already a familiar industry term. The slender tome’s reclusive author, Teddy Raymond (Tom Berenger, never less dignified) wishes to remain anonymous, but an aggressive blogger for some ill-defined website (Kevin Connolly) is being pressured by his amoral boss (a fully clothed Sylvester Stallone) to expose him as a fraud. The grounds on which he might demonstrate Teddy’s fraudulence are unclear: No one questions whether Teddy wrote the book, and Teddy makes no claims whatsoever regarding his credentials. Teddy does appear to suffer from a number of near-crippling phobias, which is maybe a drawback for a self-help guru. No wonder Connolly’s reporter character asks to be to be assigned to write about war, unemployment, or global warming instead. Sure, that’s how the news business works.

Herzfeld, the writer and director of the Robert De Niro/Ed Burns suspense flick 15 Minutes (his self-penned IMDB biography hails the 2001 film as “stylishly searing”) and the 1997 HBO film Don King: Only In America, appears to have a worldview more formed by shitty movies and TV shows than by any experience of day-to-day life as a human being on Earth. The other major characters populating his cross-section of America—okay, Redondo Beach—are a manic pixie ex-con (Kyra Sedgwick), an aspiring film actress (Elizabeth Henstridge) who gets violated by a big-time star (Cary Elwes) while shooting a love scene, a trigger-happy-cop-on-the-edge who dresses like a hustler (Thomas Jane), an alcoholic priest (Danny Aiello), a golf-loving mobster (Tom Sizemore), and his two enforcers. According to IMDb, Reach Me also features blink-and-you’ll-miss-’em appearances by Sally Kellerman, Frank Stallone, Rick Aiello, Holland Herzfeld, Scarlet Rose Stallone, and Frank Valli, Jr.

As instant life-changers go, Reach Me the book makes The Art Of War look like The Art Of Asking, and The Secret look like The Secret Life Of Bees. We know this because we see Nelly (playing a rapper named E-Ruption) on TV talking about how it saved his life. It’s later revealed (via black-and-white-except-the-book’s-cover-is-in-color flashback) that he meant that literally: E-Ruption used the book as a shield when another inmate tried to A-Sassinate him, the way Teddy Roosevelt was famously saved from a would-be assassin’s bullet by the speech folded up in his breast pocket. Other examples of Reach Me’s immediate and direct influence are equally profound: Characters need read only a few sentences before they are moved to recite them out loud. (“Map out your goals!”) “You always liked to cook,” one legbreaker suffering pangs of conscience tells another. “Why not open up a restaurant?” Gooooooaaaaaaaaaaaaaaaaal! Mapped!

Stallone, dressed in a porkpie hat that looks like a more expensive variant of the one he wore in Rocky, rates more screen time than anybody. He tries mightily to be memorable rather than likable, and he mostly succeeds, spouting more Nietzschean motivational bromides in his handful of scenes here than he did in the complete six-picture Rockiad. “You’re a finger painting!” he yowls at Connolly while standing in front of the giant red canvas he’s been flinging acrylics onto. “Be a masterpiece!” He’s fun to watch, if only because his presence evokes an alternate universe wherein he became a decent character actor instead of a vain, self-sabotaging movie star with abysmal taste.

But Stallone’s Cobra was as plausible a filmic representation of law enforcement as the cop Jane plays in Reach Me, walking around “undercover” in a duster, neckerchief, flamboyant maroon pants, and a hip holster containing an enormous revolver. Despite the uniform—he even keeps his badge pinned to the inside of his coat—Detective Wolfie (Wolfie!) doesn’t seem to be on the vice squad. He keeps provoking bad guys into gun battles so he can shoot them down, twirling his revolver like the Man With No Name and then confessing to Aiello, who dutifully tells him the Ten Commandments forbid killing. One of the guys Wolfie blasts after a bank robbery he allows to take place is Danny Trejo—Machete himself!— who appears in the movie exactly long enough to get shot. Later, Wolfie demonstrates he is Trying To Change by bringing Sedgwick’s character two teeth from the actor who hurt her friend. She smiles like he’s just brought her flowers. It’s the most emotionally coherent scene in the film, probably because there’s no dialogue. Reach Me wants to be masterpiece, but it’s a finger painting. By Captain Hook.