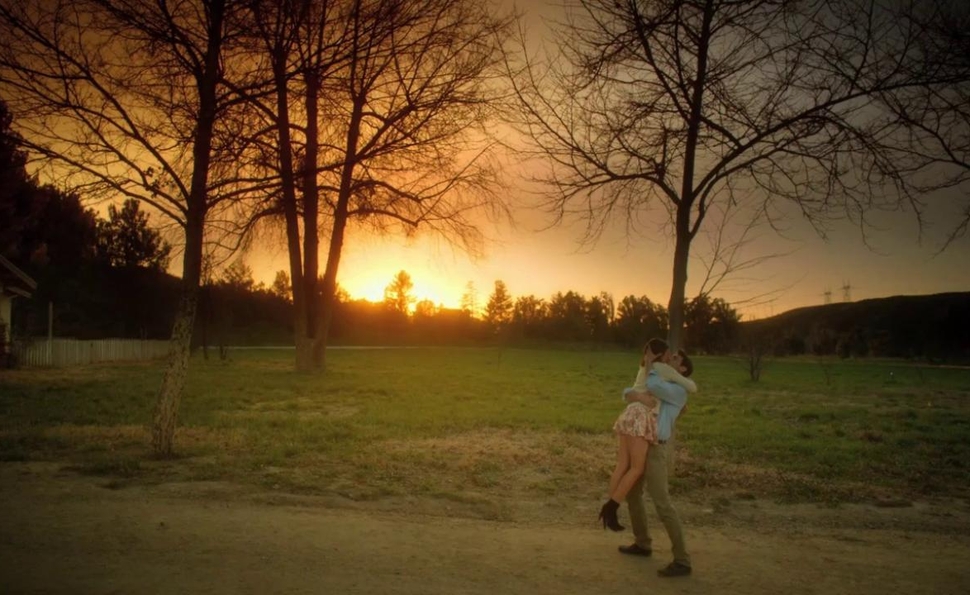 It takes a special kind of cognitive dissonance to set a film about music in Woodstock while having the protagonist sing Pat Benatar karaoke. There are no iconic Flower Power artists in Rita Merson’s Always Woodstock, nor are there any hippies, tie-dyed shirts, or 1960s references of any kind. Merson doesn’t even deliver an establishing shot of the town. The film uses its setting as lazy shorthand: for the nostalgia of lost childhood, the virtues of independence, and the spiritual purity of acoustic rock. And the hero unearths all this meaning while only having to interact with one person older than 30.

What does feel like a throwback, though, is the tale of an aspiring singer-songwriter who must escape both the corporate music world and a skeezy fiancée before she can find her true voice. Allison Miller plays the lead, Catherine, with considerable sweetness and light even when she’s down, making her setbacks seem wholly artificial. (Which they are.) She works at a giant record label where soulless pop machinery and broad comedy run rampant in equal measure: the former represented by Brittany Snow as an empty-headed pop star, the latter by Finesse Mitchell—funny even here where he has nothing to work with—as a callous exec. After Catherine is fired, she decides it’s time for a change and returns to her family house in Woodstock, which has fallen into disrepair since her parents died and it passed into her possession. But not to worry, one fixer-upper montage with her best friend (Rumer Willis) is enough to set things straight.

It’s astonishing how many tropes Always Woodstock checks off. There’s the handsome love interest (James Wolk) who’s so perfect for Catherine that the film has to throw a temporary misunderstanding between them. There’s the former talent (Katey Sagal) who plays mentor until she realizes Catherine is the one teaching her. There’s the love scene lit in hot, soft light. The cheeky dialogue and boilerplate visual style are indistinguishable from any given episode of New Girl. In the third act, Catherine completes the trifecta of briefly considering compromising her principles, reconnecting with her ex before realizing he hasn’t changed, and forgetting her cell phone at a crucial moment. The film’s music politics are also out of date: Considering how fractured and downtrodden this industry has become, why does Catherine even need to “sell out” to a top-tier label that would turn her folk songs into unrecognizable club-thumpers? YouTube doesn’t appear to exist in this world.

Merson is making her writing and directing debut, but Woodstock has been down this road before. The 2011 comedy Peace, Love & Misunderstanding boasted a nearly identical logline to Always Woodstock, with Catherine Keener playing a straitlaced NYC lawyer who learns what’s really important in life when she reconnects with her mother in the fabled hippie land. That film wasn’t very good, either, but director Bruce Beresford at least knew how to unlock the spirit of its setting with some nice town-square sequences and the presence of an actual hippie—Jane Fonda—lending credence. In place of cross-generational musings, Always Woodstock gives a preview of what will be left of Woodstock when the generation that made it has gone: a vague sense of anti-commercialism, a general acknowledgement that “The Weight” is probably the best song ever written, and an apolitical self-help manual. In other words, Pat Benatar karaoke.