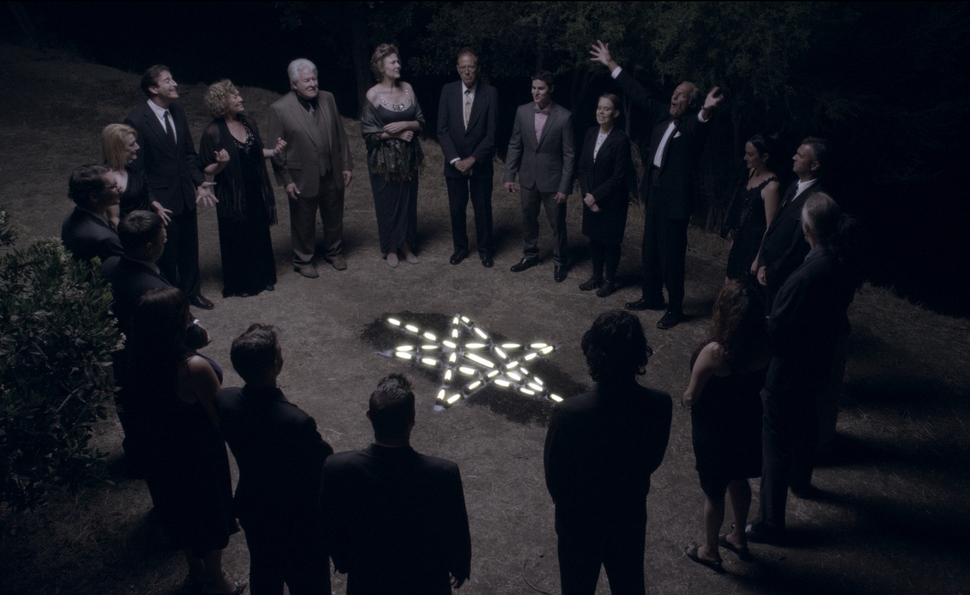 All great horror movies—and most crappy horror movies, for that matter—are fundamentally symbolic. Usually, it isn’t terribly hard to work out what real-world elements lurk underneath the booga-booga, but conscious recognition won’t necessarily blunt the film’s power. What will blunt the film’s power is preceding the symbolic spookiness with a literal presentation of whatever is being symbolized.

That’s the bizarre mistake made by Starry Eyes, a Grand Guignol exaggeration of the sacrifices made by a young, aspiring actress who’s trying for her shot at the big time. First seen working at a Hooters-like chain restaurant (with a testy manager played by the ever-reliable Pat Healy), Sarah (Alex Essoe) wants stardom so badly that each failed audition provokes her to screaming fits in which she yanks out clumps of her hair. One such episode is observed by Astraeus Pictures’ incredibly creepy-looking casting director (Maria Olsen), who’d shown no interest in Sarah’s reading, but seems drawn to her sheer desperation. Sarah gets a second audition, at which she’s asked to take off her clothes (even though the role requires no nudity), and then a meeting with the producer (Louis Dezseran), an old man who purrs about her bright future while sticking a hand up her dress. Sarah flees in disgust, but soon returns, determined to do whatever it takes to land this “gateway part.” Physical disintegration and serial murder aren’t out of the question.

Hunger for fame as a sickness isn’t an especially original theme, but that’s okay—it’s all in the execution. Trouble is, writer-directors Kevin Kölsch and Dennis Widmyer, who previously collaborated on a little-seen 2009 thriller called Absence, have inexplicably nullified the film’s horrific aspects by preceding them with mundane, everyday awfulness. If a Satanic cult is meant to represent the casting couch, actually showing the casting couch is the worst possible idea. Once Sarah drops to her knees and starts blowing the producer, there’s no longer any need to have her experience some kind of Rosemary’s Baby-style indoctrination that turns her into a psychotic killing machine. That work has been done. Imagine if Eraserhead had devoted its first half to showing Henry struggling to care for an ordinary baby (perhaps one with clubbed feet, like David Lynch’s daughter, Jennifer), only later introducing that… other thing.

Subtlety isn’t Kölsch and Widmyer’s strong suit in general. They direct Essoe to play Sarah at the brink of hysteria right from the jump, leaving her nowhere to go, while the staff of Astraeus Pictures is played by actors who appear to have been cast primarily on the basis unusual physiognomies. Oddly enough, Starry Eyes works best when surrounding Sarah with her friends, most of whom are also aspiring actors or filmmakers. Their conversations are comparatively relaxed and natural, and even when Sarah starts brutally murdering them in the film’s gory climax, they react in a more credible manner than the average stabbing or bludgeoning victim, with varying degrees of shock, disbelief, and simple weakness. It’s enough to suggest that these two filmmakers could do superlative work if they learn to trust the audience a little more. Spelling everything out is never recommended, but for a horror movie, in particular, it’s death.